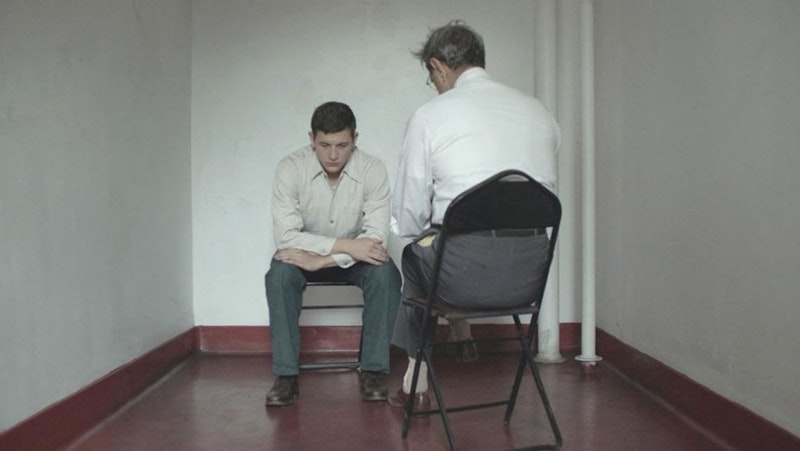 Rick Alverson made The Comedy, one of the best movies of the decade, in 2012, but I’m not sure what he was thinking when he made The Mountain. His latest stars Tye Sheridan, Jeff Goldblum, and Hannah Gross in a boring exercise in Yorgos Lanthimos cosplay. There’s a thin plot—Alverson called the film “anti-narrative” at the screening I saw, such a novel concept—and the dynamic between Goldblum’s sinister experimental lobotomist and Sheridan’s dead-eyed empty vessel recalls The Master.

Alverson insisted that the film’s lugubrious pace, drab aesthetics, de-saturated look, and withholding anything that might go beyond the superficial isn’t some simple-minded desire to torture the audience. But The Mountain isn’t slow cinema, it isn’t spartan in the same way that Chantal Akerman’s D’Est or Abbas Kiarostami’s 24 Frames are. The Mountain doesn’t want to emulate them or resemble slow cinema at all, really. Alverson’s film has a narrative, characters, plot points, and a traditional structure that places it comfortably next to typical art house fair. Economy and elision are necessary—expository dialogue dumps ruin so many otherwise fine movies and make most television unwatchable.

But The Mountain is caught in the middle, telling a by-now familiar story of an eccentric and mysterious authority figure (Goldblum’s lobotomist) and a dull disciple (Sheridan’s student-subject). Set almost entirely in silent cabins, hospitals, and other sterile facilities where love and communication are absent, the film plods along and frequently elides key moments and dramatic scenes. These things—such as Goldblum’s motivation and the precise effect his experimental lobotomies have on his patients—must be inferred. Alverson said that the way he made The Mountain was partially a rebuke against the tendency of most filmmakers to give their audiences what they want: identification, information, conflict, revelation, catharsis.

But this is not the form to hold back. Again, The Mountain isn’t slow cinema, it’s not experimental, and it’s not particularly challenging. It’s just boring. There are two wonderful moments: first, an overhead shot of synchronized ice skaters waving colorful flags and pendants. This is an image I could’ve lost myself in, an image that would’ve gained depth in time. But it’s gone as quick as it comes. The second is a close-up of Hannah Gross after she’s undergone her lobotomy. Her eyes, like Sheridan’s, are ringed black and bruised like a raccoon, and late in the film the camera pushes in on her face from below, another image that transfixes.

Gross’ recent appearance in Alex Ross Perry’s otherwise execrable Her Smell was brief and notable, but here she’s captivating and demonstrates an essential ability of all good actors: to change their face and appearance without extensive makeup or prosthetics. Like Adam Driver in Silence, Gross appears emaciated and near skeletal, all wide-eyed and tight-lipped, a face that is a territory to explore and delve into.

Goldblum and Sheridan can’t compete. The movie’s title is partially explained—or at least mentioned—by an oblique biblical rant by one of the deranged psychotics that surround Goldblum and his practice. If you’re a fan of Yorgos Lanthimos and found The Master too exciting, go see The Mountain. You probably won’t be bored to death.