I can’t remember specific plot points from movie to movie, but there's no denying that they're fun, and that includes the new one. A- 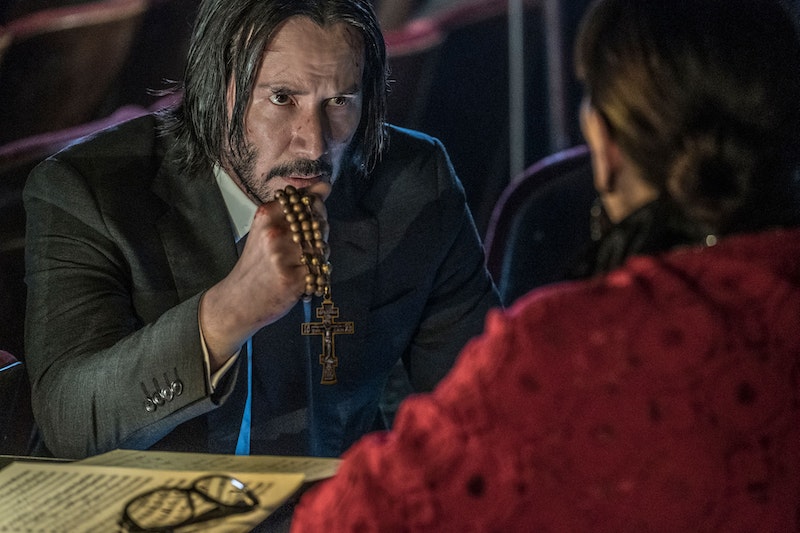 The new third film in the John Wick series is in line with the first two: it combines political intrigue involving assassins that's somewhat middling with action and fight scenes that are glorious, as well as Keanu Reeves leading a strong top-to-bottom cast. Plus, it's by far the most dog-positive franchise going today.

The Wick films may not stick with the viewer beyond a first viewing; I can’t remember specific plot points from movie to movie, nor any of that business about "coins" and "markers." But there's no denying that these movies are fun, and that includes the new one.

John Wick: Chapter 3: Parabellum is again directed by Chad Stahelski, with a screenplay credited to a quartet of writers. The story begins right after the conclusion of 2017's Chapter 2, with Reeves' Wick cast out from the society of assassins based at the New York hotel known as The Continental.

He's got just about every assassin in the world out to kill him, which leads to a film beginning with what's a sustained, 30-minute action sequence. The film later takes Wick to other parts of the world, although it ends up back in New York in time for another extended action blowout in the third act.

What's great about this film, and the series overall, is that the action is so well-executed. The often-brutal fight scenes are ingeniously choreographed, and more importantly, they're always coherent.

I've been railing for years about the prevalence of blurry action sequences that are impossible to follow, and I'm appreciative that the recent ice zombie battle episode of Game of Thrones finally brought others around to that view. But that's never been a problem with the John Wick movies—nor is it ever a problem that the star kicking everyone's ass is 54.

Reeves, while this role doesn't give him a lot of opportunities for character work or even much dialogue, he's a welcome anchor for this franchise. In supporting roles, Ian McShane, Lance Reddick, and Laurence Fishburne all return.

Meanwhile, standout additions to the cast include Halle Berry, as a tough assassin who goes even further in involving her dogs in her work than Wick ever did; this film makes much better use of Berry, 17 years after her appearance in the James Bond movie Die Another Day. There's also Asia Kate Dillon-Taylor from Billions—in a standout turn as an emissary of the assassin governing body The High Table, known as "The Adjudicator," while Mark Dacascos steals a couple of scenes as a rival assassin who both wants to kill Wick and is also a big fan.

Also appearing as an assassin who fights Wick is the Serbian NBA backup center Boban Marjanović, though his cameo lasts about as many minutes as Boban plays in a typical game. Marjanović has a presence, although I've got a feeling a body double was involved; I've seen Boban play basketball, and he's not really that quick.

My only disappointment with the cast was that there's no return appearance by Peter Serafinowicz, who appeared in a single scene of the second film as "The Sommelier," who provided guns and described them as if they were wine.

In case you thought this was setting up as a trilogy, the ending leaves the story much open-ended. But if Keanu Reeves can make a Bill & Ted sequel at age 54, I don't see why he can't play John Wick again when he's pushing 60.