Bombshell is the worst Big Short riff yet, unsuccessful as art and reportage. C- 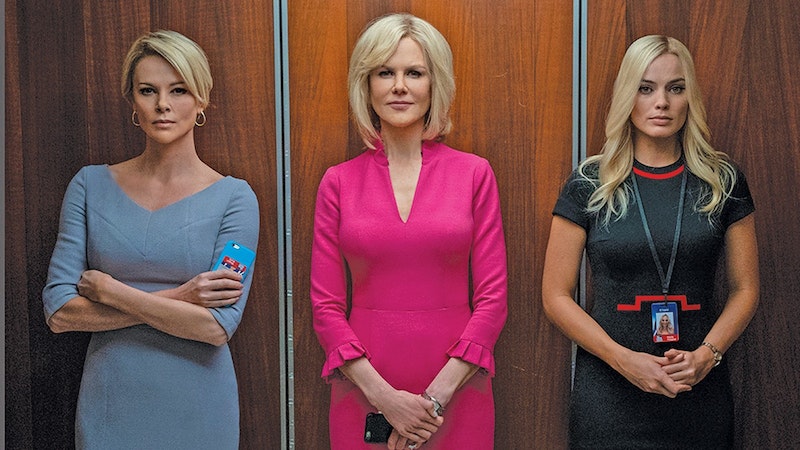 “Am I going to be the story? I’m going to be the story.” If you’ve seen any advertising for Bombshell, the new film directed by Jay Roach and written by Charles Randolph, you’ve probably seen this exchange between Megyn Kelly and her petrified handlers. Charlize Theron plays the former Fox News host in a bit of stunt casting that the movie leans on at the expense of everything else. It’s as if this movie was made just to sweep the makeup awards. Theron certainly looks closer to the actual Kelly than DeNiro looked like his 30-year-old self in The Irishman, but we knew this from the very first teaser back in the summer. “Whoa! Is that actually Megyn Kelly? Damn.” That’s the extent of Bombshell’s accomplishments—they made an actor look like someone else.

"Ripped from the headlines” is familiar territory for Roach, who directed the very good HBO movies Recount and Game Change, and Randolph, who wrote what’s ended up as one of the most influential movies of the decade, The Big Short. Just like Adam McKay’s rushed Vice last year, and the similarly woolly and undisciplined The Laundromat from Steven Soderbergh, Bombshell is in too much of a hurry to ever move beyond the superficial and silly. Divide and Conquer: The Roger Ailes Story is the de-facto companion documentary to this dramatization of the late Fox chief’s professional unraveling in the summer of 2016. Before #MeToo, and in the middle of what would become the most consequential election in recent history, Ailes and Bill O’Reilly were foisted from their perches and left out to die and dry, respectively.

Bombshell doesn’t have enough context or substance to stand on its own: if you’re not familiar with the specific events of 2015-16, or Ailes’ monstrous political past and revealing early life (his parents divorced without telling him as soon as he left for college—he returned home for Thanksgiving to find his home full of strangers), then Bombshell doesn’t work on its own. And as an acting showcase: Theron looks like Kelly, has her mannerisms down, but that voice needed some work. At times it’s pretty spot on, but more often than not Theron sounds like Frances McDormand in Fargo, her attempt at Kelly’s very specific leggy white ice queen cadence verges into a choked sort of Minnesota Nice that sounds more like a muppet than a conservative news anchor.

The film’s political project is even murkier, with Fox’s institutionalized racism, xenophobia, and transphobia barely discussed. There are some nods to changing attitudes about homosexuals—Margot Robbie’s composite character, an evangelical Christian who very easily goes to bed with a dyed-in-the-wool closeted lesbian co-worker (Kate McKinnon), asks how she could possibly work at Fox as a gay woman. “It’s a living.” Robbie’s the only woman we see harassed by Ailes in a well-done and harrowing scene. John Lithgow makes for a great Ailes, as he handles the paranoia, pathology, and panting perversion with such grace. Nicole Kidman is good as always, though not exactly remarkable, as Gretchen Carlson, the woman who got the ball rolling on Ailes’ ouster. Whether her coming forward was a principled action for fellow feminists or a cynical career move timed perfectly, who cares? Bombshell doesn’t, but I think it’s obvious the truth lies somewhere in between, and exploring that dissonance would’ve made for a more interesting movie.

But Roach and Randolph and surprisingly timid when it comes to tackling the intersectional nature of the Fox story. These women were all harassed, and in some cases raped, by their boss, and a cutthroat company culture based on loyalty let this go on for two decades. Bombshell is on the side of these women in this fight, and it’s the right side—but it never squares their female ally ship with their documented racism and bigotry. Besides a brief recreation of one of Kelly’s most infamous howlers, insisting that Santa Claus and Jesus were white, there’s not a mention of their careerist moves and reprehensible political positions. So as a filmmaking exercise, it’s at best reportage: meant to be made and consumed quickly, without much though to substance or lasting quality. Get a good cast, milk these political entertainment movies while the public is still paying attention because of Trump, and do a bunch of sudden zooms like The Office or Parks and Recreation. Bombshell isn’t bad but it’s the worst of these Big Short rip-offs because it has nothing unique or original going for it that wasn’t in the very first teaser trailer.