If you're in the mood for aesthetic hedonism, 6 Underground works. 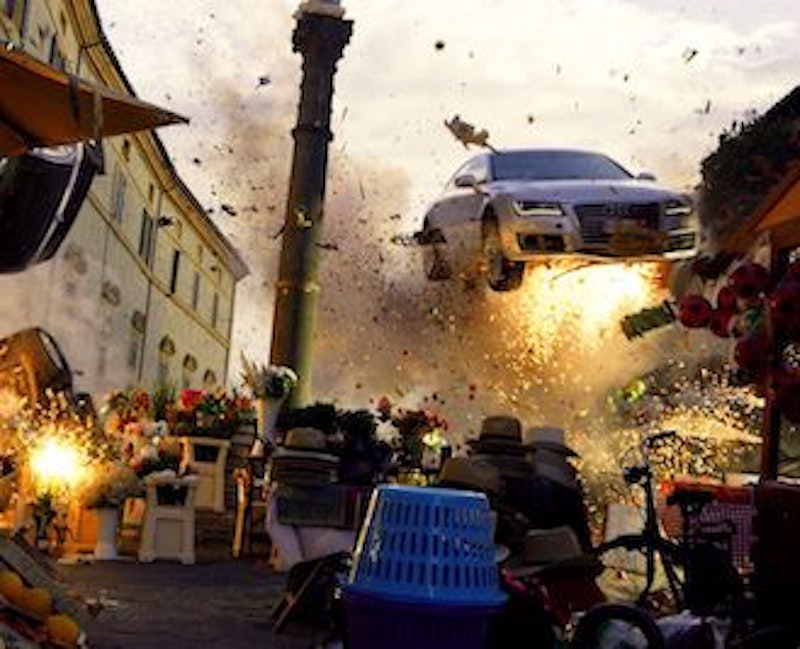 The opening action sequence to the latest Michael Bay film, 6 Underground, is a spectacular car chase set in Florence that's reminiscent of The Italian Job. The scene, much of it shot from a helicopter, lasts nearly 20 minutes because Bay's not a "less is more" guy—more like "all you can eat." He knows exactly what his audience craves and he delivers extra helpings so they never go home wanting more. But it's less real. There's none of the verisimilitude of the old-fashioned car chase scenes, as seen in Bullet and The French Connection. Ryan Reynolds, who plays a billionaire who relishes killing dictators like Brad Pitt's character in Inglorious Basterds relishes killing Nazis, brings you in on the joke right away from the passenger seat. His life's in grave danger, but that's not going to slow down his wisecracking.

A doctor who's one of a six-person vigilante team is performing makeshift surgery in the backseat and blood spurts all over. A detached eyeball comes into play, along with nuns flipping the bird, and unlucky Vespa drivers getting run into. The six squad members have various skills, including a parkour expert. They're half, in number, of The Dirty Dozen, but similar in theme. They've gone underground by faking their deaths so they can fight a bunch of worldwide villains with the freedom that anonymity affords them. That's about it for the plot. Bay doesn't try too hard to make much sense of the story.

The director throws in the little "downtime" devoted to exposition in this film begrudgingly because there has to be some semblance of a plot to hang the non-stop, steroidal action on. It's no surprise that the Rotten Tomatoes audience score for 6 Underground is nearly double that of the critics. No self-respecting movie reviewer's going on record as approving Bay's jackhammer approach to filmmaking that some have called fascistic, just as Rodger Ebert and Pauline Kael once said about Dirty Harry. In fact, Reynolds' character, known as "One," is a richer, smarter, glibber version of Eastwood's rogue cop. They're both men with power who turn to extrajudicial measures to snuff out the worst of what humanity offers because going through proper channels is too limiting.

Keep in mind that critics once looked down their noses at Alfred Hitchcock. More than 50 years ago, a prominent critic called Vertigo "an asinine, unredeemed bore" when it was released. The flamboyant autodidacts from the French film magazine, Cahiers du Cinema, who were behind propagating the "auteur theory" that began in the 1950s—critics such as filmmaker Francois Truffaut—argued aggressively that Hitchcock was producing "art," and that studio directors like Otto Preminger and Nicholas Ray were deserving of respect. They helped to stem the critical tide of condescension against mere "genre directors."

The current champions of "trashy" directors and their works of low cultural status are the descendants of Truffaut and American film critic Andrew Sarris, the principle proponent of auteur theory in the U.S. They embrace the concept of "vulgar auteurism," a term coined by Canadian critic Andrew Tracey to recognize the "authorship" of directors working mainly, though not exclusively, in the action and horror genres. A small group of contrarian critics have allowed previously dismissed directors into the exclusive club because, as auteur theory dictates, they put their own personal stamp on their work. Bay's definitely the author of his work even though he doesn't write the scripts. He's an action-genre visionary whose films are immediately recognizable by their glorious preposterousness. They're operatic in scale, though often barely coherent.

Critical acceptance, albeit limited to a coterie of rogue critics, is good news for Bay and his fellow "trash heap" directors, assuming they're interested in the critical reception of their work. Bay's accumulated extreme wealth by blowing up fast, loud objects, so you have to wonder if he's ever cared about being called an artist like Paul Thomas Anderson and Wes Anderson obviously do. He's made sure, with his unexamined, masculine style of filmmaking, that he'll never be called fey or pretentious.

The vulgar auteurs are often characterized as "unserious," which shouldn't matter unless you require attempted gravitas in all your entertainment. Trying too hard to be serious and important can end up producing contrived, ham-handed efforts like Crash, which still got director Paul Haggis a 2004 Best Picture Oscar. Hollywood forgives lack of craft, but only if the “correct vehicle delivers it," which in Haggis' case was an extended examination of the pervasiveness of racism.

If you're in the mood for a couple of hours of aesthetic hedonism, 6 Underground works. The global set pieces alone offer plenty of treats, and there's a kind of beauty in the fiery explosions that happen every few seconds, heightened by a soundtrack of electro and rock bangers.