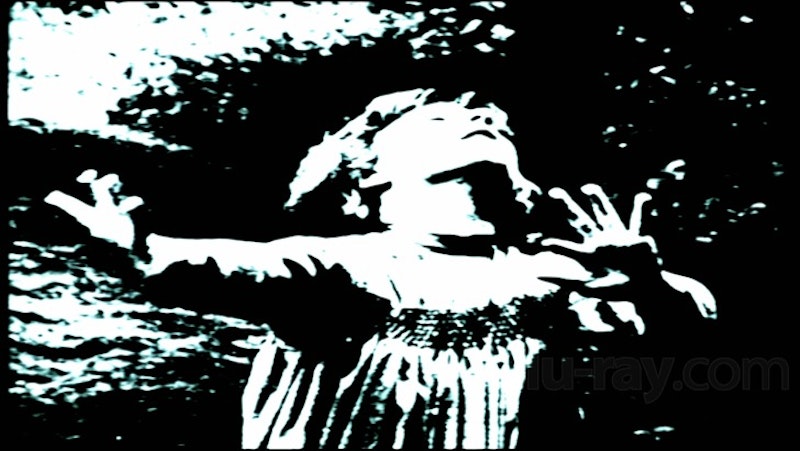 It’s like a bad dream written in a stormy night... moral fault was merged with state crimes. Because we see bombs and say they look like movies. After Oppenheimer, Aldrich’s beach house blows like Los Alamos. We see Scotty dive into the San Francisco Bay to save Judy in Vertigo moments after we see ISIS force prisoners to “walk the plank.” We see how the primitive visual grammar of cinema has infected and informed reality for nearly a century. A world where the world’s masters manufacture consent for permanent war and use the miracle of the image to veil evil. Despite its grim prognosis, Jean-Luc Godard’s riveting, hypnotic, and moving The Image Book reaffirms its hope in humanity and in the medium in its radically inventive and forward-looking form.

Godard says that when it comes to imperialism, he "will always be on the side of those who throw bombs," but this is his only slip into the ironic radical chic that defined his 1968-72 work. The Image Book is less optimistic than resigned, and despite its seemingly opaque surface, I think it's Godard's most accessible film this century. You can watch it like an album, a sampling here and there, it rewards multiples viewings (dozens, really). It doesn't pretend to be smarter than it is. The Image Book has a pretty simple message, the "stupid courage" that moved William Goldman to hysterical tears. To “shoot” has two opposite meanings: to destroy, or to preserve. And despite desparing over the state of the world, simply by creating something like The Image Book, Godard ends his career as he began: reinventing movies. They remain a necessary utopia.

Kristen Stewart moves through Personal Shopper like a condemned woman, an alien observer in a world that isn’t hers, to paraphrase a lyric by Liz Harris. Assayas conveys the ache of loss and the burden of grief so powerfully in Personal Shopper I find myself returning to it in times of distress. Because Stewart’s character will never be sure whether it’s her brother she can communicate with, or other evil spirits happy to kill time fucking with her. It has a blasé attitude about apparitions, and Assayas has said the film was inspired by real accounts of purported supernatural events. It was reportage, and Personal Shopper also crucially has the elusive and inconclusive nature of these phenomena. “It’s just me”—and a wonderful fade to white. But we know it’s not her. We’re constantly looking in and out, caught in between the lines of the living and the dead.

I wrote about I’m Still Here a few weeks ago, but I’ll say that this and Get Him to the Greek both have phenomenal performances by P. Diddy. Where has he been? He was a very enthusiastic collaborator on those movies. I want to see more of him; he’s an incredible comedic actor. I’m surprised he didn’t show up in The Beach Bum.

I wrote two pieces about Quentin Tarantino’s grand masterpiece (a review, and a defense of Sharon Tate's role in the movie) during the summer when it was out in theaters and I saw it five times. I’m not sure when I’ll watch it again. I want to, very much, but the thought of it at home bums me out. Tarantino’s film, his ninth and possibly penultimate, is everything movies can and should be: beguiling, thrilling, enormously fun, and deeply moving. Just the thought of that denouement makes me cry: once the Manson mercenaries are dead, when Margot Robbie as Sharon Tate spoke through that intercom, like a voice from Heaven, and came down safe and sound to invite their new friend Rick Dalton up to hang out. No one at Tate’s house got murdered that night, and evil was vanquished by the invincible stuntman while his famous actor partner sang badly, obliviously, in the pool out back. That is the most primal and humane use of pop movie magic I've ever seen.

Many films this decade handled smartphones in inventive and exciting ways as most media tried their hardest to make the most embarrassing iPhone era work imaginable. Tangerine, Beach Rats, Wobble Palace, and Personal Shopper wouldn’t have been possible without Steve Jobs, but The Human Surge was the only film I saw this decade that really understood how the Internet has effected the natural world. In Williams’ film, young people float in and out of empty streets, dark bedrooms, darker chatrooms, and eventually, a tour of an ant colony that leads us in and out of a computer manufacturing line. We start as ants in the dark and rise to robots under fluorescent lights. The people in this film perform various sexual acts for petty cash on the Internet, unashamed to reorient themselves to the customer’s satisfaction. We never see these customers, just their entertainment: human beings.

Chantal Akerman made many magnificent films, but Jeanne Dielman towers over her body of work (still largely unavailable in the U.S.), overshadowing even more epic achievements like News from Home, From the East, and From the Other Side. “Epic” was one of the most egregiously over- and misused phrases of the decade, not only as idiotic slang but the evaporation of its real meaning: length. Patience is a virtue and you must possess it if you want to watch an Akerman or Abbas Kiarostami film (his Certified Copy, from 2010, was the only painful cut from this list) and getting something out of them.

No Home Movie, Akerman’s final film, is characteristically bleak—how can a film about being your dying mother be anything but?—and its depression is compounded by Akerman’s suicide in October 2015 shortly after release. For a year and a half after her mother’s death, she struggled to find a reason to live. No Home Movie is not only a document by a daughter of her mother’s last days, but a desperate attempt to forge ahead (illustrated in the opening shot of a thin bare tree being whipped by wind) despite the inevitability of losing the only person you’ve ever really loved. Without her mother, Akerman had no home anymore, and she chose to die. It is horribly sad, but I understand completely.

Along with Claire Denis’ Friday Night, this is one of the most romantic movies I’ve ever seen. Haynes’ film not only evokes an era and an author, it’s a timeless tale of impossible love: shopgirl Rooney Mara and high society Cate Blanchett’s doomed affair. The sex scene in the middle is one of the best in cinema: everything before is leading up to that, Carol’s tension and her eventual release in bed are so beautiful, lustful sure, but it remains moving in every way. A simple period piece some may say, a very good Patricia Highsmith adaptation, but not a masterpiece. But I can’t deny the power of a film that makes me feel like I’m falling in love every time I see it.

One of the only films I can think of about mediocrity (Jim Jarmusch's Paterson embraced it in typical form—it would make a good double bill with this much more cynical movie). A man who was in the right place at the wrong time and vice versa, a man who could hold his own on stage at The Bitter End in Greenwich Village, but will never be Bob Dylan, the man who follows him at the end. Llewyn Davis sees a perfectly rendered early-1960s Dylan singing the same song he just sang before a full room as he exits the club to get beat up and lead us back to the same scene where the movie began. To be left in line for Heaven, on the precipice of greatness—no other Hollywood duo could create a film as realistic, empathetic, and pathetic as Inside Llewyn Davis.

The French take on Curb Your Enthusiasm. Claire Denis’ film is bitterly funny and just as mean and cynical as her High Life from this year, without that film’s dysfunctional structure and thoroughly grim atmosphere. Let the Sunshine In takes places in nice bars, apartments, restaurants, parties, lovely cars. Everything is oh so nice and oh so French, and underneath this patina of geniality is a miserable view of modern dating and the death of romance. Denis has made some very warm and romantic films (Friday Night especially, but 35 Shots of Rum and Nenette et Boni). It’s an unintentional parody of a particular American strain of movies aimed at the elderly starring elderly actors playing elderly people “having one last go at it,” whatever that may be. Watching these films (Paris Can Wait, The Leisure Seeker, Finding Your Feet) as a healthy adult feels like being hooked up to a dialysis machine. Denis’ sunshine is entirely antiseptic, vicious and hilarious. How appropriate that the credits roll over Juliette Binoche's "moment of revelation," a blunt sign that this conversation is just as vapid and inert as everything in these peoples' lives.

It’s astonishing that a British filmmaker could make such a grand and prescient film about America in the years leading up to the election of Donald Trump. Arnold’s film is so intuitive and fluid in its study of “flyover country,” nearly three hours of teenagers and twentysomethings traveling together as modern traveling salesmen, paid by some organization with too much money to get people with too much money to spend some of it on some junk. But even in suburban and rural America, the guts have been hollowed out: we keep finding empty homes, massive McMansions occupied by one family, a fascinating sequence involving four men in cowboy hats and raw ribeye steaks. By looking at America from the outside in, Arnold saw the surreal and brought it out so clearly in American Honey, a film birthed from the heartland unfettered by exposition or plot beats.