Destination Wedding Is the Best Film of the Decade 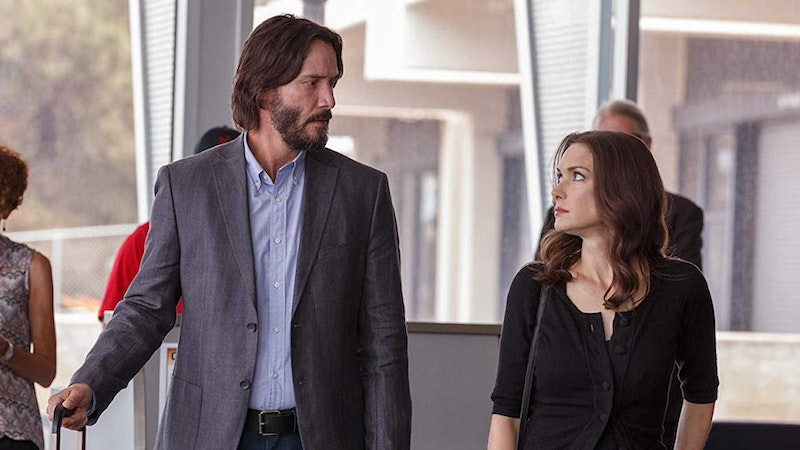 "No wonder no one likes this movie," my wife told me as we were watching Destination Wedding for the third time. "It was made just for us."

It's not hard to see why critics and public alike were unenthusiastic. Rom-coms today are supposed to provide sweeping, exhilarating spectacles. The most iconic rom-coms—When Harry Met Sally, Love Actually, Pretty Woman, 27 Dresses—revel in the meet cute and the public declaration of affection. Characters are perky and successful or blandly downbeat, waiting to reveal hidden depths in the crucible of romantic transmogrification. Cute friends stand ready with a supportive quip when doubts intrude, and ex’s and detractors face inevitable humiliating and, again public, comeuppance. There’s someone out there for everyone, and the whole world celebrates when they find each other. Rom-coms are less about falling in love with two people in particular, and more about ritually declaring that love waiting for you (and you too.)

Destination Wedding doesn't work like that. Frank (Reeves) and Lindsay (Ryder) meet at the airport, where they instantly dislike each other. Shortly thereafter they discover that they're headed for the same destination wedding at Paso Robles. Frank's the half brother of the groom; Lindsay is the groom's ex. They provisionally bond over their hatred of their shared acquaintances, and move on to bonding over their mutual and overwhelming brokenness and crankiness. And that's the movie.

It’s a deliberately anti-romantic rom-com. There are no grand gestures, no heartfelt declarations. Instead, it harks back to an earlier era of rom-coms like Bringing Up Baby or His Girl Friday, reveling in barrages of rapid-fire screwball comedy dialogue. Acid wit is all you get for plot and seduction.

Some of the funniest dialogue in the film is about how destination weddings—in which the bride and groom demand all their friends fly to an expensive giveaway for an elaborate celebration of their union—are presumptuous, gaudy impositions. The film itself deliberately refuses staginess; the camera is focused throughout and solely on Frank and Lindsay. A running joke throughout is that everyone else on screen treats them as if they don't exist, whether they're struggling loudly to open bags of airline snacks or loudly denigrating their fellow guests, nobody notices them or hears them. They can't even effectively call a taxi.

One critic said this deliberate insularity made the film look "cheap." But the point is that Frank and Lindsay's world is tiny and insignificant. They're pushed off to the side of the big romance, watching other people drink wine, dance and run around like dopes in big transparent bubbles for some hideous quasi-athletic mixer. Usually rom-coms are desperate to assure the audience that their romances matter and are important. Destination Wedding goes out of the way to tell you the opposite. "I don’t want to be a person you don’t know where to stick. That is not the life I imagined for myself," Lindsay moans. Frank, ever the optimist, responds, "I'm sure your next life will be better."

The film’s high point is one of the most grotesquely, gloriously awkward sex scenes ever filmed. Lindsay and Frank wander away from the rest of the guests in a desperate bid for freedom, and find themselves face to face with a large predator cat. Frank scares it away by hawking phlegm in his throat, making a horrible sound that even a large hungry land mammal can't stand. After the cat bounds away the two run in the opposite direction, eventually falling and rolling down a hill. ("Fuck. Fuck. Fuck!" Frank says as he descends.)

In the wake of the excitement, they decide to have sex ("I haven't felt pleasure since 2006" Frank admits in Reeves' best gruff deadpan.) During the act, Ryder argues blithely about what sort of predator cat they escaped (Puma? Lynx?) while Reeves thrusts and grunts and tries unsuccessfully to get his tie out of the way. It's like watching the mating of two busted meat marionettes. The scene makes you never want to think about sex again, and simultaneously charms the pants off of you.

Frank and Lindsay have solid reasons for unhappiness. Frank's hideous home life culminated in adolescence with his father shooting him and then committing suicide. Lindsay's break-up with the groom on the eve of their wedding left her emotionally devastated.

So when they find each other beneath all the cynicism and anger and Lindsay's spectacularly unsexy pajamas ("People have jousted in lighter clothing" Frank says in disgust), the connection feels hard won, delicate, and worth preserving. "You call this fun?" Frank asks as he sits in bed with Lindsay and your pajamas. "Sure!" Lindsay says, her face alight. "We're arguing, but…" When Frank shows up at Lindsay's door in the final scene, Reeves' look of hangdog, resigned hope is wonderfully eloquent—especially since it's the one time in the film when he and Lindsay stop talking.

There are a couple of hiccups: I’d have been happier without the PC-bashing interchange, or the homophobic one. Still, it's a relief to see a rom-com that imagines love as hyper-verbal intimate flirtation rather than as a blaring pantomime for the nosebleed seats. Biggest isn't always best. Destination Wedding is my favorite film of the decade because it's the one that is most determinedly small as life.