Scrooge is a villain with the power to solve the problems of every living person in the story and no desire to help anyone. 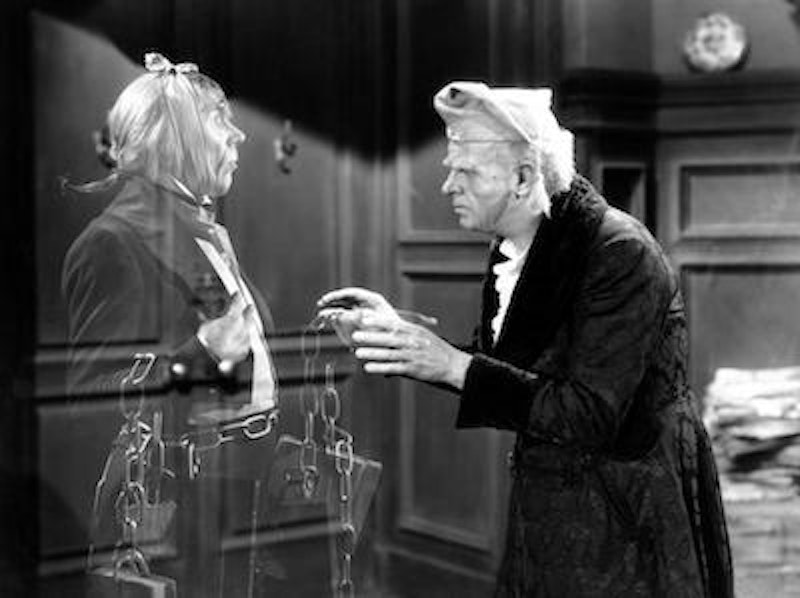 A Christmas Carol offers a moral so clear no child could misunderstand it. A less obvious lesson, flowing as an undercurrent: the poor should stay merry in their poverty. The propaganda message is so integral to the story that no variation in the plays, movies, and TV retellings, spanning nearly 180 years, can depart from the core message. Keep the poor content and working.

A young Ebenezer Scrooge apprenticed under Mr. Fezziwig, a lovable kind man who treated his employees well. Fezziwig was not without monetary success. Fezziwig ran his businesses as privately-held enterprises, during an age when much larger public corporations eclipsed businessmen like him. In a modern adaptation, Fezziwig could be a shopkeeper in a small town standing in the shadow of a Walmart.

During the original Dickens story, Fezziwig quickly passes from memory. More thought extends to Scrooge's lost fiancée, who ended their engagement due to Scrooge's true love shifting to money. She says to him, "Our contract is an old one. It was made when we were both poor, and content to be so, until, in good season, we could improve our worldly fortune by our patient industry. You are changed. When it was made, you were another man."

Poverty is often overcome by "patient industry" and not Cardi B type "money moves." The book The Millionaire Next Door, details a large scale study of American millionaire households. Of those examined, around 80 percent were first-generation affluent; many rose from poverty to wealth. Paramount among the traits common to these self-made millionaires: frugality. The millionaires surveyed in the book seldom owned luxury cars or showed any grand displays of wealth. Most had 30 percent of their money in the stock market, and cash saved in a “go to hell fund.” Scrooge, while changed as a person, was displaying the traits that take people from rags to riches.

Some adaptations of A Christmas Carol have undertones that poverty is virtuous, and the wealthy are predators. In the Noel Langley screenplay, Fezziwig refuses to sell his business. In that version, Fezziwig, when advised to sell his company, says, "It's not just for money alone that one spends a lifetime building up a business… It's to preserve a way of life that one knew and loved. No, I can't see my way to selling out to the new vested interests, Mr. Jorkin. I'll have to be loyal to the old ways and die out with them if needs must."

In the Langley version, Scrooge and Marley ultimately force Fezziwig into closure and buy his business. An incredible shame, as in Dickens' telling, Fezziwig stands alone as a sort of ethical capitalist. Fezziwig values his workers, treating them well, and gaining financial success, for a time.

In a Jungian sense, art is a window into the mind of the artist, and adaptations of art reflect ideas from both the original and new artists. When Dickens wrote the story, he was undergoing a financial struggle, owing money to his publisher.

His words paint a grim portrait of a wealthy boogeyman, who’s despised by all but the kindest hearted. Scrooge would rather have the poor die than donate his wealth, and wanted workers always near the brink of that impoverished demise, forcing them to continue working for him.

Scrooge is a villain with the power to solve the problems of every living person in the story, but with no desire to help anyone. A sharp contrast to the weak and powerless Tiny Tim, whose childish innocence wants to see only the good in people. As a percentage of income, the poor give far more money to charity than the wealthy, and seemingly always have. In The Millionaire Next Door, only 18 percent of those surveyed disagreed with the statement, "Charity begins at home." Also, most millionaires donated far less to charities than others in the same income bracket.

As charity begins at home, investing in your future is part of why so many millionaires, who often start very poor, become wealthy. While most of the high accumulators of wealth aren't making huge (as a percentage of net worth) donations to charity, many have tangible positive impacts on the lives of others. To use the words of Dickens speaking as Scrooge, "He [Fezziwig] has the power to render us happy or unhappy; to make our service light or burdensome; a pleasure or a toil…. The happiness he gives is quite as great as if it cost a fortune."

Possibly Fezziwig was the embodiment of a perfect boss because he was the embodiment of an ideal man. But few people hold Henry Ford up as a person who's guiding principle was kindness. Yet it was Ford who doubled the pay of his workers and instituted the 5-day, 40-hour workweek. Treating people well was good for Ford's bottom line.

In the film The Great Dictator, Charlie Chaplin shows his thoughts in a Jungian moment. Chaplin explains death as a force protecting humanity. "The hate of men will pass, and dictators die, and the power they took from the people will return to the people. And so long as men die, liberty will never perish."

Death is inevitable and not just for the living. Currently, the business world has more Scrooges than Fezziwigs or Fords. But subprime loan grouping and leveraged buyouts proceeding bankruptcy, cannot continue forever. The world needs more people who escape poverty by their patient industry (even when that process makes them seem cold) to go on to be like Fezziwig and not Scrooge. What Dickens expressed well is the idea that the human experience can’t be merely amassing a fortune. To be human in an industrial age is a complex balancing act. The goal is not to die friendless, surrounded by wealth or impoverished surrounded by loved ones put into debt by your demise.