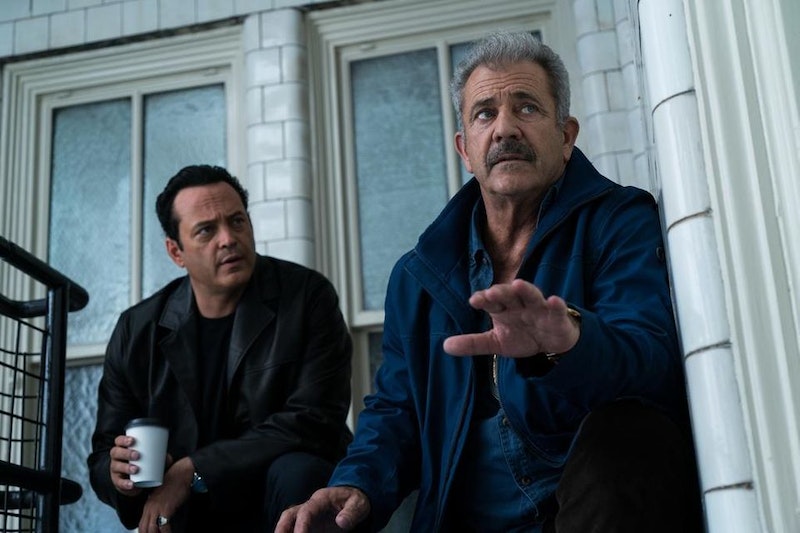 Having watched movies that are listed in many best-of-the-decade lists, one boundary that’s perceivably “broken” was exposing the malaise of younger generations through political means, which may explain why the likes of Mad Max Fury Road, The Social Network and Moonlight are frequent entries. But the most provocative film of the decade isn’t a movie about a black, gay man growing up in impoverished Florida, nor a college student who made a tech website parasitically integral with our social lives. The decade’s most absorbing film has Vince Vaughn agonisingly eating a sandwich in a car for almost two minutes. Sitting beside him is a bored Mel Gibson waiting while someone is planning a heist.

The scene is from Dragged Across Concrete, directed by S. Craig Zahler, and it demonstrates a wit and grit that’s sorely lacking in American cinema today. The grit comes from its cynicism, which doesn’t burden the film’s integrity with a false facade of seriousness. The wit is derived from the lucid dialogue borrowing from pulp noir, exploitation and horror, but never comes across didactically. Dragged Across Concrete rattled the film culture when it was first released in March with its alleged ideology alone.

Dragged Across Concrete is about two low-level cops—Brett Ridgeman (Gibson) and Anthony Lurassetti (Vaughn)—suspended after being caught arresting a Hispanic man while investigating a drug raid. Ridgeman is already struggling because his family, including his ill wife, is living in a crime-ridden neighborhood where teenagers harass their daughter. Meanwhile, Lurassetti plans to propose to his girlfriend, but his profession and her politics make her distrustful of him. This leads to the two becoming vigilantes, following a planned heist to get back payment. But there’s more to this story. Before we ever see a frame of both leads, we see Henry Johns (Tory Kittles), an ex-convict fresh out of prison, who returns to crime, after he sees his family—his mother and disabled brother—out of poverty. While each character share the desperation in escaping their lives, he comes off more pragmatic and honorable due to his cool temperament, in contrast to Ridgeman who expresses his bitterness about the limited options in his humanity.

It’s no surprise that as critics accuse Zahler of empty provocation, calling him a reactionary and potentially a crypto-fascist, conservatives welcome its artistic integrity. Armond White, writing for National Review, lauded Zahler as “an American filmmaker who has experienced Quentin Tarantino and surpassed it,” while Ben Shapiro gave the film a shout out on his podcast. It’s rare to see conservatives embracing a film that’s relegated to the arthouse scene.

The verbal tics in its dialogue are a carefully crafted choice, not an impediment in cementing the film’s ambiguity about these characters. Ridgeman is bitter about being paid cheaply as a policeman for decades. Lurassetti, a cop who’s a generation younger, reacts in disgust, and as we see further, is a flawed person always goes by the book.

Touches of Don Siegel and Quentin Tarantino are laced in its cinematic language, but the characters in Dragged Across Concrete are reminiscent of Michael Mann’s mosaic of cops and robbers, with one crucial difference. Mann’s morale brings characters who are very good at their jobs; hence the viewer rightly celebrates competence. On the other hand, Zahler show cops and criminals equally righteous in their indignation, but only one side continues to be terrible in upholding their duties.

There are choices Zahler makes that looks questionable on the surface but are consistent with its ennui about order hard to gain yet dehumanizing when enforced so stringently. It reminds me of Frank Costello’s opening lines in The Departed: “I don’t want to be a product of my environment. I want my environment to be a product of me.” One instance is the subplot featuring Jennifer Carpenter as a bank teller, afraid of going back to work because of her infant son being raised by her ominous partner, who might be one of the robbers. Despite her small screen time, she significantly shares the cast’s anxiety: their families are threatened, except instead of money, she pursues nurture, a value that’s ultimately unrewarded by the harsh nature of the environment.

Zahler is a master of utilizing blocking and time to good use. One example in Dragged Across Concrete I mention was Lurassetti eating a sandwich, but another useful scene is within its violent climactic set piece, when the cops finally catch the robbers after a long driving sequence. The bare-bones lighting, largely tinted in blues and oranges, enhances much of the characters’ anxiety into something tragic and beautiful.

The difficulty of watching Dragged Across Concrete should be no surprise, given that it was produced by Cinestate, a production company some believe aims at the Trump right (personally, I feel it’s the A24 for the Intellectual Dark Web), which currently owns the legendary Fangoria magazine and have launched a new movie website dedicated to genre cinema. Cinestate contains a militaristic streak among its oeuvre. Its other major release this year, Standoff at Sparrow Creek, centers on a militia, trapped in a storage unit, when one of their members rampages a police funeral. Brawl in Cell Block 99, Zahler’s previous effort, is a pro-life film where Vince Vaughn plays a stoic skinhead with a cross on his back who heads to prison to see that his family will be on the line. Each of these films stands in a sea of independent cinema so embedded in miserable whims to appease consensus criticism.  Dragged Across Concrete is also met with reluctance for casting Mel Gibson, an outcast actor in the lead as a racist cop, where another character equates his suspension from the police force, following a questionable arrest, to being linked with communism in the 1950s.

Dragged Across Concrete is provocative because it's so difficult. Difficult films aren’t guaranteed to be creative, but the challenges provided are crucial in understanding what the movie-going experience was in the past and should be in the future. Films in 2019 like The Irishman and Once Upon a Time In Hollywood depict men as potentially disposable people getting close to their expiration date without a legacy. Dragged Across Concrete has an extra dimension, with a black man, two disabled people and a well-off woman, nevertheless as mortal as the old white cops. It’s a mistake that so many critics choose to be lukewarm about the film, and rank it below films that simply operate to please preconceived notions.