Does anyone really need to spend the holidays with a suicidal Jimmy Stewart? 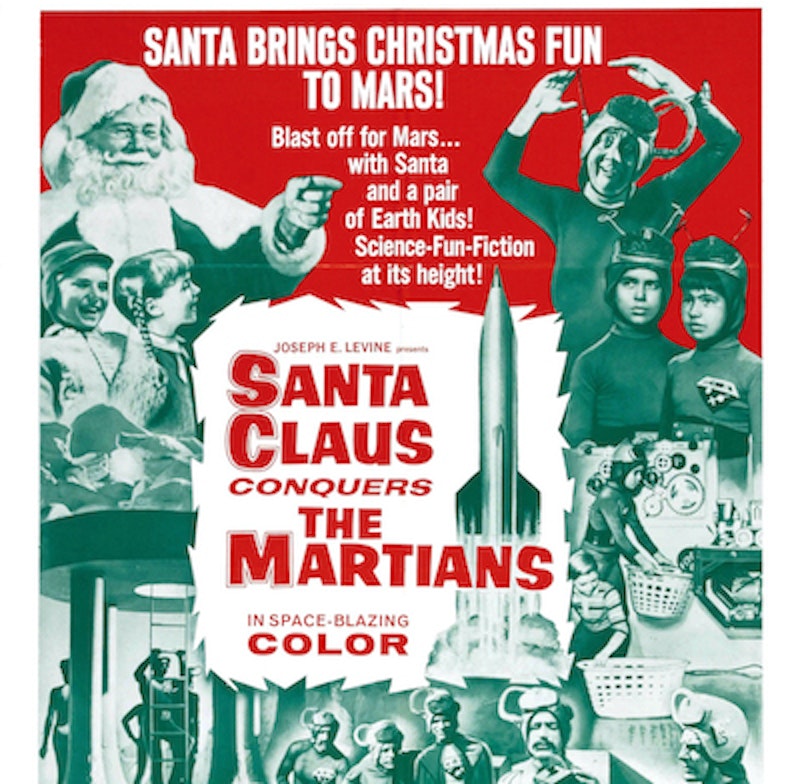 When people mention classic Christmas movies, they cite It’s a Wonderful Life, Miracle on 34th Street, Rudolph the Red-Nosed Reindeer, and the countless and unnecessary adaptations of A Christmas Carol, among others. Nobody mentions my favorite one, though, and that’s the 1964 B-movie Santa Claus Conquers the Martians. Despite its reputation as one of the worst movies ever made—and it has that reputation for several legitimate reasons—it’s still a fun movie. It’s certainly more entertaining than boring, hokey, and overrated “classics” like Love, Actually and It’s a Wonderful Life.

The movie begins with Martian couple Kimar and Momar noticing their children Bomar and Girmar (the latter played by a young Pia Zadora, years before she fucked her on-screen father Stacy Keach in Butterfly) aren’t happy. For help they consult Chochem, an ancient Martian sage who sounds like he’s about to die and says Martian children need to learn how to have fun like Earth children. “We need a Santa Claus on Mars,” he croaks before vanishing in a puff of smoke. Kimar and a group of other Martians, including comic relief Dropo and villain Voldar (clearly marked as a villain by his mustache), then go to Earth, abduct Earthlings Billy and Betty to help them find Santa, and then go to the North Pole to kidnap Jolly Old St. Nicholas.

Santa and the Earth children befriend Bomar and Girmar, and they pitch in to work at Santa’s new Martian toy factory. Unfortunately, Voldar sabotages Santa’s factory, and then kidnaps Dropo thinking that he’s Santa. Santa and the children win in the end by pelting Voldar with toys and soap bubbles. Voldar’s arrested, Dropo becomes Mars’ surrogate Santa Claus, the Martian children are happy again, and the real Santa and the Earth children fly back home just in time for Christmas Eve. The film ends with a sing-a-long of the theme song “Hooray for Santy Claus,” which should be a standard Christmas radio staple.

Santa Claus Conquers the Martians is cheesy from start to end. All the Martians look like the Great Gazoo from The Flintstones (who decided aliens have to be green anyway?), the plot is absurd, and there’s a hilarious bad scene where Billy and Betty encounter a polar bear and a robot—both portrayed by men in cheap costumes—on the North Pole. The movie also constantly reminds the audience which character is which in case anyone forgot; Billy and Betty twice refer to Voldar as “the one that doesn’t like us,” and in one scene Santa says Dropo is the comic relief character, as if his over-the-top goofy antics didn’t make it obvious enough.

We never know what makes Voldar such an asshole. He briefly says in one scene that Martians need to remember they are a warrior race, and the film suggests there have always been tensions between him and Kimar, but that’s all the audience gets. I guess the filmmakers needed a standard Scrooge archetypal character, but even Ebenezer had good reasons to hate Christmas.

Santa Claus Conquers the Martians is an appropriate movie for the holiday season because, in a way, Christmas itself is cheesy. Families go out of their way to string as many lights as they can on their houses, department stores are filled with tacky decorations, and 95 percent of Christmas music is either overproduced bubblegum pop or sentimental sap. It’s fitting to celebrate Christmas with a movie that reflects everything tacky about the holiday. Besides, does anyone really need to spend Christmas with a suicidal Jimmy Stewart? I prefer celebrating with little green men from Mars.