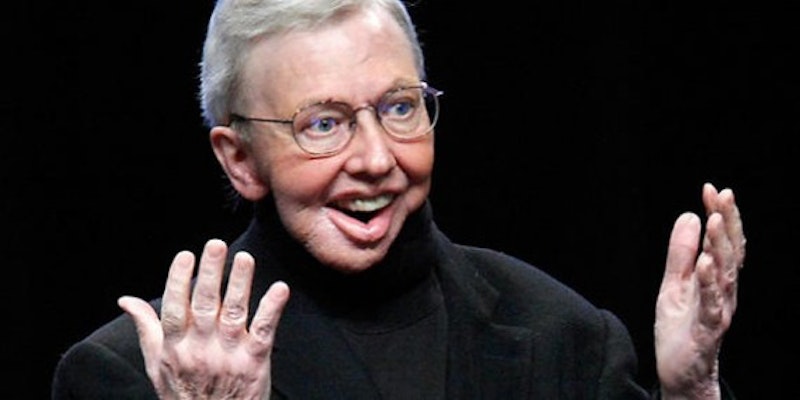 A celebrity’s death is simply another opportunity to get some play on Facetwit; rack likes and faves like lines of coke and try to fortify for tomorrow, when you might start to think everyone hates/has forgotten about you. Consider the morbid case of a person anticipating the gross deluge of likes after a loved one of theirs has passed away. The disconnect between our manicured online identities and the calculations that go into every status, comment, like, profile picture, or camera pose makes us all into Stepford children who take too many drugs, party too hard and secretly want to drink out of crazy straws in their parents’ house forever. Whether we network in D.C. or slum it in a million Boston pubs or sit inside and suck the bong, digital communication is a shock to our slow-to-evolve systems.

Roger Ebert was a relic. He’d been sick for years and I was frankly blown away by how many people were fawning and tripping over themselves to say something totally insane like “RIP Ebert a TRUE LEGEND!!!” “This is soooo sad” “aaaaand I’m crying,” as if they’d been collecting his anthologies since puberty. I think it might just be the name recognition—Siskel & Ebert and later Ebert & and that worm Roeper distilled film criticism, a dense and technical thing if done the right way, into a two thumbs thing that seems lifted right out of Sesame Street. It’s a device that is still mocked for its ridiculousness, reducing a movie down to a number of popcorn bags/fingers/big gulps/milk duds. His show was the pinnacle of hokey, garbage culture that dumbs us all down by osmosis. But his writing took a really serious and good turn after he got sick over a decade ago. I mean, the man hadn’t eaten anything or spoken at all for the last seven years of his life, but he was still able to write, and he wrote prolifically for the Sun-Times and his own website. His later criticism was astute and benefitted greatly from the perspective gained by his hellish struggle with cancer.

Ebert’s favorite movie of the 2000’s was Synecdoche, New York, and his review nails what makes it so great and polarizing: “I think you have to see Charlie Kaufman's Synecdoche, New York twice. I watched it the first time and knew it was a great film and that I had not mastered it. The second time because I needed to. The third time because I will want to. It will open to confused audiences and live indefinitely. A lot of people these days don't even go to a movie once. There are alternatives. It doesn't have to be the movies, but we must somehow dream. If we don't 'go to the movies' in any form, our minds wither and sicken.” I doubt any of the crying-in-their-minds teenage girls and freshman film students who have wet dreams about Spielberg would understand that movies are a special opportunity to set our brains on fire. The shallowness of our communication is dangerous. Read his writing.