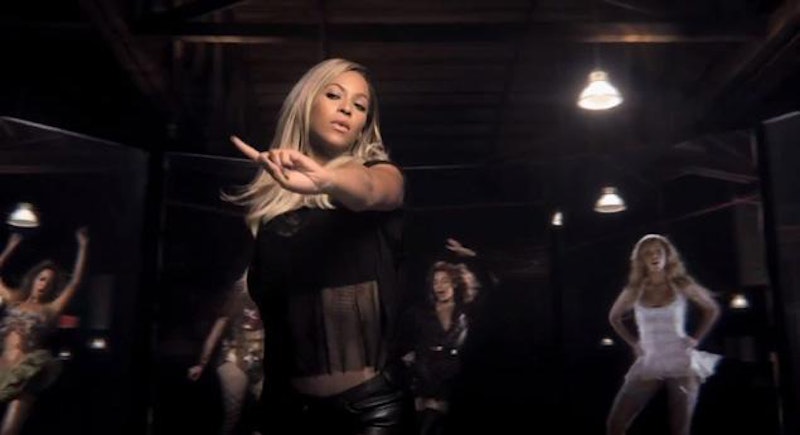 Beyonce Knowles is crazy. Not sandwich-board wearing, "the end is nigh" beardo crackers or "Aunt Edna wears her bloomers over her culottes" nutty or garden-variety Cam'ron bonkers, where it's like the other person talks nonsense to you but isn't aware that it's nonsense. It's a special, vaunted celebrity brand of dissociative megalomania that implies that the sufferer is an advanced-model Fem-Bot, sent back from the future to study and attempt to understand our primitive hunter-gatherer culture, perpetually on the verge of a fatal short circuit.

Bey's super-supple, joint-oiled hyper-humanity has produced a bevy of daring albums, zeitgeist-cornering singles, and bewildering videos—and yet watching the woman hold a press conference or submit to an on-camera interview is an unnerving experience, because since the woman is working outside of the performative mode she's been conditioned to inhabit since early childhood, a full-on, Ryan Seacrest-in-Knocked Up meltdown seems pretty much inevitable. Everybody knows that's coming. It's simply a matter of when.

Knowles' latest multi-media attention grab is a Pepsi commercial entitled "Mirrors," surely, a million ill-advised parodies are in the offing, including one where some punter snorts a line off of a mirrored glass coffee table and suddenly sees himself as he was in 1992. Anyway, in the spot, the diva breaks from a dance routine and surrenders to a sip of the acrid soft drink—the most delightfully insincere sip ever—which causes past incarnations of Bey from previous videos to surface in the various gigantic mirrors before which she stunts.

A normal person might assume that she'd been drugged or had taken leave of her senses, but this is Beyonce Knowles, so this opulent retrospective hallucination—man, her bouffant, cybernetic I Am... Sasha Fierce phase was just... beyond—becomes a sort of ultimate dance-off that (perhaps unwittingly) offers mere mortals a window into the psychology of Mrs. Carter. Maybe, when she's coasting through the maze of meet ‘n' greets and charity events and promotional events and blockbuster world tours and corporate strategy sessions and baby feedings and intimate gourmet dinners with Jay-Z and motion-picture pitch meetings and conference calls with stylists, hairdressers, and artistic directors that is her life, she opens those wide, fastidiously shadowed eyes and everybody who she happens to encounter has her face. If true, it would mean that Our Bey effectively spends every waking moment of her life performing for versions of herself, like a wide-scale, CGI holocaust version of the demented video treatment for Aphex Twin's "Windowlicker" or the part in Being John Malkovich after John Malkovich has leapt into his own consciousness. Crazy.