The Truth Shall Make You Odd 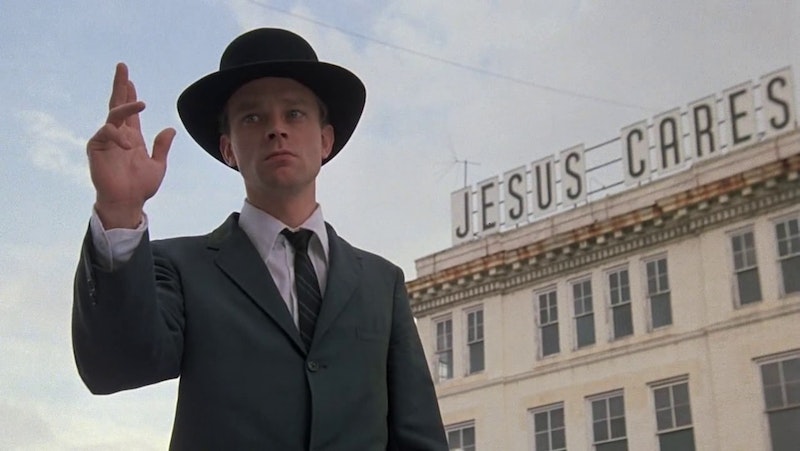 What do you get when you mix up a young man who believes in “nothin’,” a phony street preacher who’s pretending to be blind, a preacher’s slut daughter, a young man obsessed with a weird-looking mummy in the museum as well as with a fake gorilla, an entertainment huckster, and Jesus Christ? A novel by Flannery O’Connor. The novel in question, Wise Blood, was published in 1952. O’Connor died 12 years later, at age 39, of lupus. She suffered greatly, especially during the last years of her life, as she began physically changing, mostly thanks to the steroid treatment for her lupus. Yet, what marked her short life wasn’t so much her illness but her great talent for storytelling, and above all, her Catholic faith. Unlike any other American writer, O’Connor’s vision seems to have come from “above,” and her stories were filled with strange characters in search of God and redemption. Grace made itself visible but not until strange violence hit the character over the head.

In the late-1970s, film director John Huston was approached by Michael Fitzgerald, son of Robert and Sally Fitzgerald. Michael’s parents were literary executors of O’Connor’s work, and their years with O’Connor were marked with intense friendship based primarily on the Catholic values. Fitzgerald wanted to make O’Connor’s novel into a film, and Huston was a good choice because he was famous for superb film adaptations of great works of literature. After raising enough money, filming began and Huston’s film came out in 1979.

To say that Wise Blood is an odd film is an understatement. It won’t leave you with a warm and fuzzy feeling, it won’t make you happy, and it won’t convert you to any religion. But the film is one of the best adaptations ever made because its strangeness derives from O’Connor’s literary vision.

Brad Dourif plays Hazel Motes, a young man returning from military service to Georgia. He visits the family homestead but there’s nothing there but barren land, overgrown family cemetery plot, and a broken house. The South isn’t only Christ-haunted but also poverty-haunted, and almost all inhabitants have left the area, either to another state and city, or crossed over into the next world to finally meet Jesus.

Hazel buys a suit that unintentionally makes him look like a preacher, throws away his military uniform, and cashes his army check. “Are you going to tend to the farm, Haze?,” asks the tailor. The answer is no. Hazel’s going to do “something he ain’t never done before.” He’s an angry man, and Dourif plays him brilliantly. He moves from slow and quiet anger to outright rage. Hazel never smiles, except when he visits a local prostitute, Mrs. Leora Watts, “The friendliest bed in town!” Even this encounter proves strange yet true to reality.

Mrs. Watts is obese. Her skin folds have their own skin folds, her hair is greasy, and when Hazel sees her for the first time, she’s cutting her toenails with the pair of shearing scissors. “Make yourself at home,” she says. As in shame or for some reason to justify his existence, Hazel says, “What I mean to have you know is: I’m no goddam preacher.” Mrs. Watts looks at him with such kindness and maternal gentleness that negate her dirty pink negligee, and says, “That’s okay, son. Momma don’t mind if you ain’t a preacher.”

Hazel has made up his mind. He doesn’t believe in anything, and definitely not in Jesus—a constant presence that is as thick and humid as Georgia air. He has decided to start his own church—Church of the Truth Without Christ Crucified. Hazel doesn’t deny that Jesus was actually crucified but he’s no different than the two thieves that were killed that day on the hill of Golgotha.

It’s unclear where Hazel’s stubbornness will take him. As he’s walking the streets of Taulkinham, he hears the voice of a man, dressed in a used pin-striped suit, selling the “miracle” potato peeler. People have gathered around but his schtick is interrupted by an older man and a young woman. The older man is Asa Hawks (Harry Dean Stanton) who turns out to be a phony preacher pretending to be blind, and the young woman is his daughter, Sabbath Lily. “Dollar for Jesus! Dollar for Jesus,” yells Asa, and Hazel isn’t having any of this. There’s no need for redemption, because there was no sin, and everyone is welcome into his Church without Christ.

The more Hazel insists that he’s not a preacher (and we assume an atheist, although that word wouldn’t even exist intelectually in Hazel’s angry mind), the more he’s sounding like one. Is he a fake? Or does he really, paradoxically, believe in a church that has no God? Fakes are everywhere in this film. Along with Asa and Sabbath Lily (who’ll spread her legs for any man in town and beyond), there’s Enoch Emory (Dan Shor), a naïve young man, who wants to help Hazel in convincing people that Jesus didn’t die for anybody. Enoch’s committed to this mission-less mission, but just like Hazel, he’s delusional about his own state of being. He thinks he has “wise blood,” a gift that’s not bestowed upon anyone just like that. “It’s kind of like the gift of the prophets,” says Enoch.

Hazel rejects Enoch’s spiritual help, and in search for congregation, he encounters Hoover Shoates (Ned Beatty) who thinks that he and Hazel could make a good travelling preacher team. Hoover’s a swindler and thinks that Hazel’s preaching on the top of the beat-up 1958 Ford Fairlane is a scheme. But no! Hazel’s serious about his Church without Christ—“where the blind don’t see and the lame don’t walk and what’s dead stays that way.”

As the film evolves, Hazel’s life devolves. Out of anger, he kills a man, and the turning moment comes when a police officer stops him on the highway. “Did I speed?,” asks Hazel. “No,” says the cop. “I just don’t like the look on your face.” What happens next is so absurd and funny that it defies belief. For reason unknown, the police officer pushes Hazel’s car into the near-by pond. Hazel loses the will to preach the gospel of nothingness.

Angered by his life and Asa’s fake blindness, he blinds himself with quicklime. He turns inward and it appears that he’s indeed, “saved.” According to Brad Dourif, Hazel has found God in the end. But what kind of God? Hazel becomes a saint but what kind? He has blinded himself in order to “see,” but this turns out to be a foolish act. He may have found God, but didn’t he make God in his own image? Perhaps this is also part of John Huston’s view, who was a fervent atheist. He was convinced that Hazel was just a ridiculous man, and that the film he made was about the absurdity of the Deep South. But in the end, Huston abided by the script, and said, “Jesus wins.”

This in itself is something one finds in O’Connor’s stories—the humor of the film production parallels the humor in her stories. The most unlikely characters become the vessels of God, and while Huston thought he was poking fun at all those “Southern, religious freaks and hicks,” it’s the freaks who have the last word. He, an atheist, has delivered a film so odd, stuck in the 1950s South, yet timeless in its absurdity. In the end, isn’t there some absurdity in a belief in God? Aren’t we all, who are believers, a bit “mad” for believing in something that can’t be seen?

O’Connor’s Catholicism reflected a strong relationship between faith and reason (unsentimentally, she read Aquinas before bed), but she shows the humanity of visionaries, false and true prophets, and people who are possessed by God’s love or judgment. It’s the judgment that Hazel evades throughout the whole film, yet in the final moments, he decides to pay for his sins by blinding himself and mortifying his flesh. His madness isn’t stubborn anymore and his spiritual journey has ended in a creation of violent grace. In an author’s note to Wise Blood’s second edition, O’Connor wrote that “all comic novels that are any good must be about matters of life and death.” The story of Hazel Motes is funny, horrific, and one of uniquely American Southern absurdity, marked by serious matters. But as O’Connor herself said, “You shall know the truth and the truth shall make you odd.”