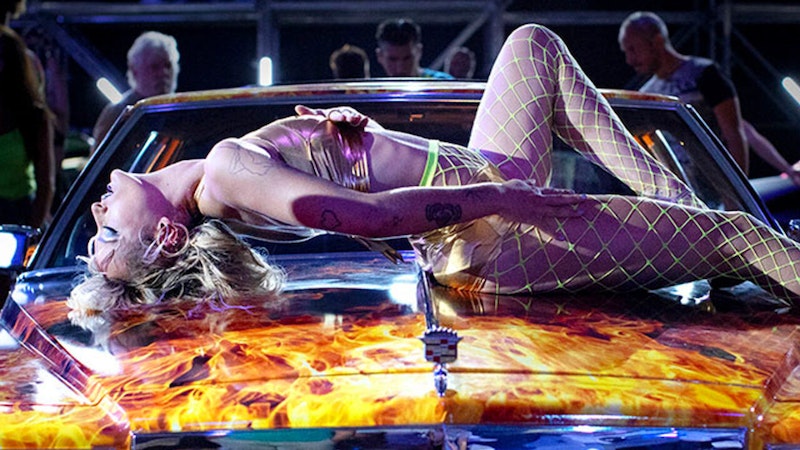 Julia Ducournau’s Raw rubbed me the wrong way, but cannibalism’s always a surprise, and I hadn’t seen as many cannibal forest movies in 2017. It was a striking movie and exciting, painful but without any of the stultifying dread that renders so much modern horror, particularly in America, so leaden. But that’s just in the arthouse. We’re not as limber as France when it comes to cinema. Blending genres is common and easy in Europe, but in English? Too confusing. Raw starred Garance Marillier as a teenager experimenting with cannibalism. As with wine, this is plausible in France—as a treat. Raw was funny, disgusting, shocking, and compelling, without ever taking itself too seriously.

Ducournau’s follow-up Titane, winner of this year’s Palme d’Or, is a bigger movie and more obscure: star Agathe Rouselle says maybe two dozen words in the entire movie, and we know nothing about her character or why she’s messed up by the time we meet her. Rouselle plays Alexia, a young woman in a car driven by her tired and annoyed father, on his cell phone and begging his daughter to stop whining like a foghorn in the back. She’s trying to annoy him, and even after their car accident leaves the right side of her head smashed open, you can tell her personality hasn’t changed much.

She continues living with her father well into adulthood, dancing at auto shows and waking up in the early evening looking like death warmed over, ready to ignore her dad again. We don’t see or hear much of him, but we see even less of the car that rolls up to fuck Alexia one night, only to bounce and never return. Naturally, she gets pregnant, and her emerging titanium car baby is what you think is going to drive the rest of Titane. Alexia runs away, and we see two types of ads: one for kids who went missing years ago with computer generated “age enhanced” approximations, and wanted ads for Alexia, who murdered a leering pervert/possible rapist right before she got knocked up by the car.

The car really, really loved being danced on. People are willing to settle. Titane doesn’t continue being fun and insane for long: soon, after killing some more people, Alexia decides to pretend to be one of the missing children—a boy—now all grown up. Vincent Lindon plays Vincent, father of Adrien, and he refuses to have a DNA test done on this person claiming to be his son. “I know my own son.” Vincent and “Adrien” go home, and Titane becomes something else, something less fantastical and invigorating. Vincent’s a firefighter, a squad commander of many young men, and Alexia as “Adrien” joins the group. All of them see what’s up, or at least suspect something, but Vincent shoots them down: “Don’t talk about my son. Ever.”

Plausibility isn’t a problem: a boy separated from his father for a decade might very well be mute. Rouselle makes herself look androgynous enough, a middle ground between Genesis P-Orridge and Marilyn Manson in the music video for “The Dope Show,” and she passes, even when she’s gyrating on top of a firetruck after being goaded by her beefcake colleagues to join in the party. Instead of continuing to roam and murder people as she brings her car baby to term, Alexia settles with Vincent, just as Vincent settles for an adult that he realizes cannot be his son. As he tells Alexia after he sees her breasts for the first time: “You’re my son. I don’t care who you are.”

Titane is another story of lonely, hurt people looking for family in this wild and crazy industrial world of ours. YAWN! Ducournau’s deft direction and tonal flexibility make this movie worth seeing, along with Ruben Impens’ stellar cinematography (more split diopter shots!). I also think it’s very funny that the car just comes to have sex with Alexia and then never comes back. Titane might’ve been less jejune if it kept the course of craziness, but without that family angle, and a “treatment” of modern masculinity so vague it could be interpreted any which way, it probably wouldn’t have won the Palme d’Or.

Ducournau’s film is one that “says something about our world today,” despite its antecedents in the body horror of Claire Denis and David Cronenberg (Brian De Palma is also clearly an influence). I don’t think Ducournau was trying to make what we call “Oscar bait,” and I realize that the juries at Cannes change every year along with the cultural climate, but she’s made a less interesting film, even if the high points of Titane far exceed anything in Raw. There’s no satisfying payoff with the car baby, but the movie really spends a lot of time dealing with the surrogate father/faux-son relationship and commits to it completely less than halfway through. As good as Lindon and Rouselle are here, they can’t compete with a car that fucks.