Factotum: A Darkly Comic Look at the Life of Charles Bukowski

The film offers a contrasting vision to that of Barfly director Barbet Schroeder. 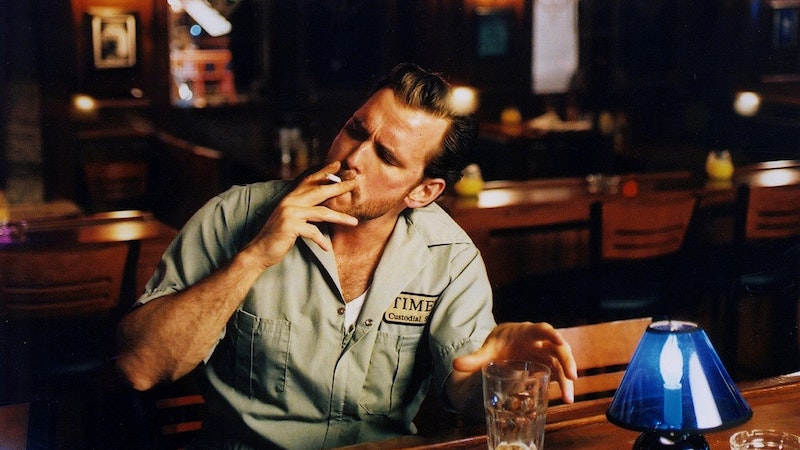 The protagonist of Factotum, a film based on Charles Bukowski’s novel, is Hank Chinaski (played by Matt Dillon), a young rebel who likes to write, drink, and chase women. Chinaski, modeled after the author, is forced to take a series of menial jobs to support his habits, as writing is his only skill, and it's not paying much. That he keeps getting fired from these jobs provides, given the absence of any real plot, at least a semblance of dramatic structure. It's the running joke at the core of  Norwegian director Bent Hamer's work, which is essentially a comedy, albeit a grim one.

But there are few comedies, if any, that depict a hungover couple taking turns going into the bathroom of a dump apartment to puke. But then there are scenes like the one in which Chinaski gets fired from his cabbie job (due to a prior DUI and 18 drunk and disorderly arrests) and then asks his boss, deadpan, to call him a cab.

Factotum begins with Chinaski delivering ice to a  dumpy bar—the only kind he frequents. But when Hank visits a bar, he wants to drink, which is what he does until the boss tracks him down and fires him. The next scene shows Chinaski checking into a fleabag hotel (Bukowski lived in a series of them in his hometown of Los Angeles for years until he found some success), and later in the evening writing in longhand with a whiskey bottle on the table and a cigarette burning, as Bukowski used to do. "I'm a writer," Chinaski had told the woman at the front desk.

Here's some dialogue from his next job interview:

"So why do you want to work in a pickle factory?

"It reminds me of my grandmother. She used to serve me pickles whenever I'd visit her."

“What's your novel about?”

"How about my wife?"

With a vocal vaguely reminiscent of Jack Nicholson in The King of Marvin Gardens, Dillon remains deadpan throughout this exchange—and every similar exchange——intensifying the humor. It's a sly, understated performance with none of the flamboyance, and little of the darkness that Mickey Rourke brought to his portrayal of the Bukowski character in Barfly. Dillon's character is low-key and self-contained, seeming to lack any sort of vulnerability. Nothing gets to him. The film steers away from the familiar clichés of drunken behavior. There's no inebriated hijinks à la Nick Cage in Leaving Las Vegas.

Although Bukowski was a drunk, he was neat and clean, and was bothered by the perception that he wasn't. As Dillon plays him, he's always put together, even when hungover. The one area in which the pretty-boy actor's unable to provide verisimilitude is the looks department. Severe childhood acne had left Bukowski's face a pitted mess, although it didn't seem to bother him. Readers want their wild-man writers to look like a wild man.

Chinaski meets Jan (Lily Taylor) in a dive bar. He picks her up, and is soon living in her crummy apartment. One night, Chinaski realizes that it's dinnertime and there's no food in the refrigerator. Jan, in her underwear, offers to cook him pancakes, but laments that they're out of butter. "Then fry 'em dry again," Chinaski replies, unfazed. The wine pairing's a jug of rotgut red, and that's all he cares about.

Taylor's performance stands out. She's not too pretty to play an alcoholic with an on-the-skids lifestyle. Though her character's seen hard times, Jan remains playful and warm. When Chinaski dumps her, Jan doesn't scream and cry in his face. She gently pleads with him to stay, and when he walks out the door she weeps silently. It's the only sad moment of the film.

Barbet Schroeder's Barfly is a hyperactive look at the excesses of an unusual artist. It's a dark film that's emotionally draining. Hamer's is different, and most likely it adheres closer to reality, given the cooperation the director received from Bukowski's former wife, Linda. It lacks the pyrotechnics of Schroeder's effort, partially because the screenplay was co-written by longtime Jim Jarmusch producer Jim Stark. Stark, rather than wallowing in the drinking aspect, simply presents that as one aspect of a complex artist who rejected all things bourgeois and conventional, including sobriety.

Barfly is a slice-of-life film whose ending offers the viewer hope for Chinaski's future. As he walks into a topless bar after meeting with Jan, who's now living in a nice neighborhood with another man, the director cuts to the front-desk person at the hotel where Chinaski was living at the beginning of the film. She doesn't know how to reach him so she's reading a letter to him from a publisher, and it's good news—he's getting his first short story published after many rejections. As she reads, Chinaski, in a voiceover, muses as a stripper works the pole: "If you're going to try, go all the way. Otherwise, don't even start. It could mean not eating for three or four days. It could mean freezing on a park bench. It could mean derision. If you're going to try, go all the way. There is no other feeling like that. You will be alone with the gods, and the nights will flame with fire. It's the only good fight there is."