Fauci is a fine but perfunctory documentary on "America's doctor." B- 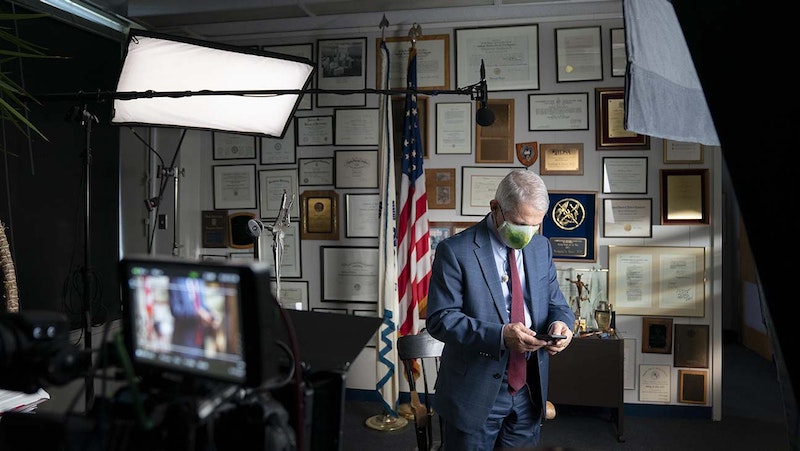 Fauci is a new documentary about Anthony Fauci, the top government infectious disease specialist and frequent COVID-era political lightning rod. Produced by National Geographic and now streaming on Disney+, about two-thirds of the film is what you'd expect: In-depth on-camera interviews with Fauci, along with a rehashing of the last two years of controversies and Fauci's role in them.

The film was directed by John Hoffman and Janet Tobias, and it's a positive portrait of Fauci. The filmmakers didn't invite critics like Alex Berenson to provide a counterpoint as to why Fauci is actually wrong about everything; if that’s what you’re looking for, that’s what Facebook and YouTube are for. The film is a portrait of much of Fauci's life, including his decades-long tenure as director of the National Institute of Allergy and Infectious Diseases (NIAID.)

Fauci is interviewed on television all the time, and if you've watched the news since last year, you're aware of the Fauci debate. Just about the only thing in the contemporary parts of the documentary that we're not used to hearing is the Brooklyn native dropping an occasional curse. But there's one part that's more fascinating than the others: A look back at Fauci's fights with AIDS activists in the 1980s, when he was in his current position, and frequently criticized for going too slow with the development of AIDS treatments.

The coronavirus pandemic isn’t the first time that large groups of people have seen Fauci as a villain. The difference was that ACT UP and the like were chiding Fauci for not doing enough, while anti-mask and anti-vaccine types are attacking him for doing too much. Today’s protestors are angry about inconvenience, but for those in the AIDS era it was a matter of life and death. The documentary is fair to both sides of the argument. Fauci clearly had no ill will towards people with AIDS, and was acting as a scientist. But the activists, many of whom were dying, were right in demanding faster approval of medicine.

There’s been a lot of coverage of this, but the film deploys fantastic archival footage of Fauci's arguments with Larry Kramer and other activists of the era, which eventually caused Fauci to befriend some of the activists. Kramer died last year, at 84, and Fauci spoke eloquently about his passing. The film also includes one moment when Fauci is shown in split screen, watching a video of himself speaking back then.

The film otherwise depicts Fauci as a diligent physician and scientist. He’s good at playing the political game; you don't survive through six presidential administrations and multiple disease outbreaks if you're not. He's never fled for the private sector, and has hung on in government service into his 80s. Fauci hasn't always been right, but he's often the first to admit that. The film probably could have done more to address Fauci's place in the unhealthy rise of political stan culture, especially among liberal resistance types. Applying the standards of superhero fandom to political figures isn’t healthy, and Fauci's been a recipient of that, even inspiring bobbleheads.