A successful adaptation of Stephen King. A- 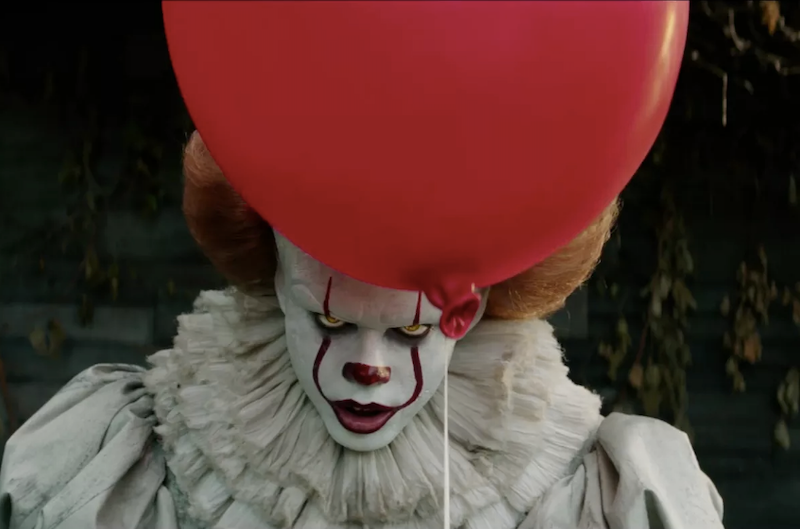 Coming just a few weeks after the release of one of the worst Stephen King adaptations, The Dark Tower, comes one of the best, the new cinematic version of King’s 1986 novel It. The film succeeds for three reasons: A wonderful sense of place, perfect casting, especially of the young characters, and it’s really, really scary.

King’s It was a 1,000-page novel, released in 1986, which told the story of an evil spirit, appearing in the form of a killer clown named Pennywise, terrorizing a group of kids (known as the “Losers Club”) in 1950s Derry, Maine, and then the same characters as adults 30 years later. The novel already was adapted into an outstanding four-hour TV mini-series in 1990, with John Ritter, Annette O’Toole, Harry Anderson and Dennis Christopher playing the adults, and Seth Green as one of the kids; Tim Curry was the clown.

The new film focuses only on the kids’ story, and a future sequel will supposedly tell the adults’ side. The masterstroke in the new film is that it moves the action from mid-century to 1989, giving the film a vibe similar to such 1980s films as E.T., The Goonies and the also King-derived Stand by Me, with a group of outcast kids teaming up as they confront the supernatural. The popular Netflix series Stranger Things did much the same thing, and while It doesn’t ape the vintage film grammar quite as blatantly, this film is clearly counting on the box office support of Stranger Things fans.

As the film begins, a young boy dies, pulled into a sewer by the evil clown. Meanwhile, a couple of dozen other children in the town have disappeared, which draws much less police and media attention than one would think (Like Stranger Things, this is another fictional entertainment with echoes of the horrific, long-unsolved Jacob Wetterling case, also from 1989. It’s also likely to remind some of that “killer clowns” bullshit from this time last year).

Seven children, including the older brother of the original dead boy (Jaeden Lieberher, from last year’s Midnight Special) investigate, but also must face the clown, who manifests himself by preying on each of their greatest fears. For the one girl in the group, Beverly (an excellent Sophia Lillis), it’s a room full of blood, bringing back a theme from yet another King adaptation, Carrie. And speaking of Stranger Things, it brings back Finn Wolfhard, one of the kids from that show.

There are also non-supernatural monsters, including a gang of bullies that’s especially violent and sadistic even by the standards of movies set in the 1980s. Meanwhile, every parent is either cruel, a full-on abuser or merely absent.

It was going to be directed by Cary Fukunaga, who made Sin Nombre and Beasts of No Nation, as well as every episode of the first season of HBO’s True Detective. He dropped out before production, although he’s still credited as co-writer. Stepping in as director is the Argentine filmmaker Andy Muschietti, best known previously for the 2013 Jessica Chastain horror film Mama. He impressively builds this world and this lived-in town, and does an outstanding job with the casting and direction of the young actors.

But what ultimately makes It work, beyond everything else, is that it’s really, really scary.

Goon: Last of the Enforcers Is an Average Sequel. B

Goon, from 2012, was one of the more entertaining, out-of-nowhere comedies in recent years: the story of a random bar employee in his mid-1930s (Seann William Scott) who suddenly becomes a minor-league hockey enforcer. I said at the time that it was both the second-best movie ever made about minor-league hockey, and the second-best movie in which the hero is a bar bouncer.

The first film had such a great hook—a guy, from a family of Jewish doctors, embraces hockey combat—that the inevitable sequel couldn’t possibly deliver as much surprise. The new film, Goon: Last of the Enforcers, is still funny, even if it totally lacks the original’s element of surprise.

Goon 2 is directed by Jay Baruchel, who gave probably the funniest performance of his career in the first film, and returns for the second. The new film is set a few years late and Scott’s Doug Glatt is now married to erstwhile groupie Eva (Alison Pill), and considering getting out of the game, although extracting himself is more difficult than he thought. He winds up in a feud with younger player Anders Cain (Wyatt Russell), who’s less a hockey tough than a full-on sociopath (think of King Joffrey, as a hockey player).

It has the first film’s hilarious team camaraderie, featuring a highly international group of profane oddballs. Most of the cast is back, although sadly Eugene Levy doesn’t return as Doug’s dad, and Baruchel and Pill aren’t given nearly as much to do as in the original.

Then again, realism isn’t the film’s strong suit. The fights are a lot more violent, active and bloody than any real hockey fight I’ve ever seen; in one scene there’s so much blood on the ice that I’d have thought someone was dead. Goon is set in a world in which concussion fears don’t exist. And the returning Liev Schreiber, who turns 50 later this year, is obviously too old to be an active hockey player (although Paul Newman was 55 when he made Slap Shot).