Clueless is an Assimilation Narrative

Putting the "Jewish" Back in "American Princess." 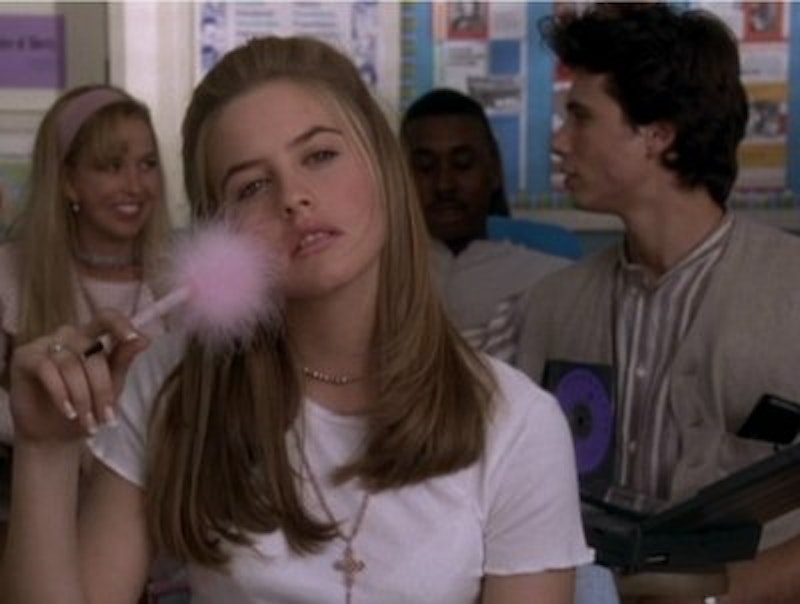 This is the eighth post in a series on women filmmakers. The seventh, about Bound, is here.

"I actually have a way normal life for a teenage girl," Cher (Alicia Silverstone) declares at the beginning of the classic teen comedy Clueless (1995). As with much in the film, it's a multi-leveled joke. Cher is absolutely not normal; she's fabulously wealthy—so much so that she needs a computer to collate and organize her hundreds of fabulous designer outfits. But she’s also dead-center Hollywood normal. Alicia Silverstone is white, thin, blonde, young and (as her step-brother Josh tells her) "gorgeous." Even wealth is a typical part of the fantasy movie package. Cher is the atypical, typical heroine we've all seen before. She's an abnormal stereotype of normality. Which is to say, she's a Jewish American Princess.

Supposedly Cher only ended up Jewish when Jewish actor Wallace Shawn, playing debate teacher Mr. Hall, ad-libbed her last name as "Horowitz." Director Amy Heckerling and Silverstone are both Jewish themselves, though, and they chose to keep the name. Thus, Cher Horowitz, all-American wealthy Beverly Hills icon, is also an icon of assimilation. In being Jewish, she is more American than mainstream America, and vice-versa.

Aggressive, vapid normality is exactly the JAP stereotype, according to scholar Martin Lund. In Re-Constructing the Man of Steel,  Lund's book about superheroes and Jewishness, he explains that the Jewish American Princess of the 1980s and 90s "was an unpassionate figure of passive consumption and consumerism, a product of integration into the middle class and the frustrated expectations of those who had achieved the dream and found it lacking." He adds, "Significantly, the Princess was not a figure of difference, but of sameness." Named for an Armenian-American who became the embodiment of American pop kitsch, Cher is shallow, materialistic, and clueless precisely because she's willfully jettisoned her ethnic identity. "I don't speak Mexican," she blithely tells her El Salvadoran maid. Having submerged her own cultural distinctness, Cher’s oblivious to the differences, and therefore to the feelings, of others. Assimilating means assimilating to classism, and to racism.

Clueless has been praised for its unusual diversity compared to the utter whiteness, or outright racism, of the John Hughes teen comedies it follows. But that diversity is nervously predicated on the uncomfortable JAP ethic of sameness. Cher's best friend, Dionne (Stacey Dash) is black, wealthy, and like Cher "named after great singers of the past who now do infomercials." Success on America's terms means commodification and shallowness. Similarly, Cher's gay friend (Justin Walker) is both semi-closeted and named "Christian," as if to assure viewers that he fits in to that mainstream with all the assimilated Jews who love to shop. Cher's father Mel (played by Jewish actor Dan Hedaya) sneers at Christian: ''What's with you kid? You think the death of Sammy Davis left an opening in the Rat Pack?" Davis was black, gay, and Jewish. A joke about his membership in Sinatra's mostly white, heterosexual band of American celebrities is therefore a comment on Clueless' variegated assimilated cast—and an oblique suggestion that part of fitting in is policing the boundaries of who else gets to be part of the club.

Cher, for her part, is eager to assimilate others to JAPness. Much of the film’s plot is devoted to her efforts to make over Tai (Brittany Murphy), a classless stoner from another school. Cher restyles Tai and tries to set her up with Elton (Jeremy Sisto) a supercilious popular kid asshole. Cher's efforts partially succeed—she and Tai, after some bumps become good friends. But the assimilation also fail; Tai ends up with fellow unpopular kid/sweet stoner Travis (Breckin Meyer). "Me and Tai… we don't make any sense," Elton insists; class, for him, is a common sense, unbridgeable barrier. Different people just belong in different slots. The film despises Elton for thinking so—but nonetheless, Dionne is paired with a black boyfriend, and Tai is paired with a stoner boyfriend. Assimilation works best when everyone knows their place.

For Cher, this means true love with her own step-brother, Josh (played by the Jewish Paul Rudd). Josh is not a JAP; instead, he's another, more positively inflected Jewish-American stereotype—the earnest, nerdy, intellectual do-gooder. Where Cher is shallow and consumer-oriented, Josh is knowledgeable and concerned about other people. As Cher discovers that she's in love with her step-brother, her natural goodness, buried under the designer outfits, takes meaningful shape— she helps her dad with his law cases and donates her skis to the victims of natural disasters. Through the power of intra-familial endogamy, Cher is rescued from assimilated mass-consumerism, and becomes a charitable mensch.

Cher escapes JAPness through acquiescence in patriarchy. The JAP stereotype isn't just an ethnic sneer projected on Jews; it's a gendered sneer projected onto women, often by Jewish men. The fear of assimilation is also a fear that women will gain autonomy. Jewish men worry that Jewish women, freed from Jewish tradition, will undergo misogynist degeneration into triviality, frivolousness, and inauthenticity. Following the tradition of Jane Austen's Emma, on which Clueless is based, extraordinary women need the control and guidance of men to achieve their full potential. In the movie’s final scene, Josh tells Cher that he has a $200 bet on her catching the wreath at the wedding they're attending. Cher tells him it's "in the bag," and then goes and grabs it. She gains determination and competence by letting a man tell her what to do. And that man points her, specifically, towards the goal of patriarchal institutions, since the person who catches a wreath is supposed to be next in line for a wedding. Cher escapes from the JAP stereotype of assimilation by having her own difference as a woman contained and controlled.

Cher is not Amy Heckerling—but still you can see a parallel between the director and her main character. Many of the movies I've looked at in this series on women directors so far have deliberately pushed against Hollywood conventions: Belle, Bend It Like Beckham, Bound, and Girl Walks Home Alone At Night all play with the male gaze and traditional narratives about male heroes, in one way or another. Clueless, in its embrace of female friendships, and its rejection of John Hughes the-stalker-is-really-a-cutie narratives, also insists on a female perspective. But because its Jewish protagonist is white and wealthy, the film ends up looking a lot like a standard, male-directed romcom in a lot of ways—not least because the mildly nerdy Josh gets the superhot girl, and becomes the director who makes over her soul. Jewish girls can be the stars of their own lives if they look just right, and are willing to admit that they're clueless.