On Project Runway and teamwork. 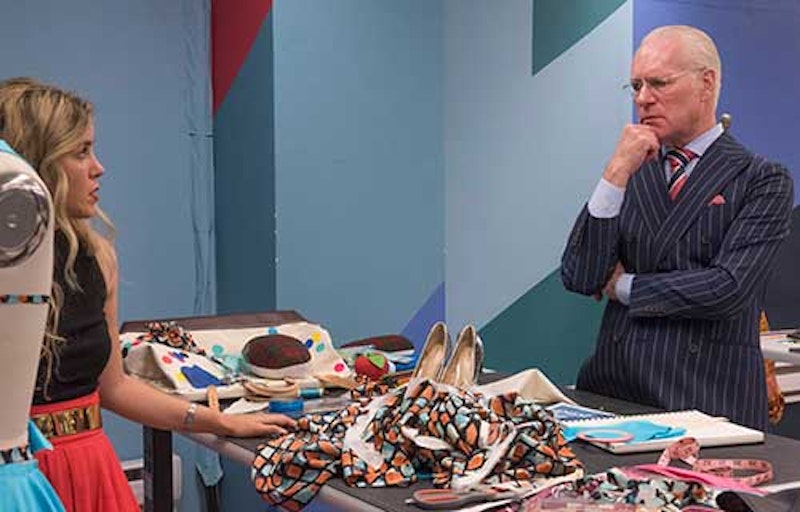 In Pitch Perfect, an improbable rag-tag group of spunky college girls gets together and competes in a nationwide a cappella contest. At first, the protagonists don't get along. Our hero, Beca (Anna Kendrick) is a bad girl loner with intimacy issues, while the team captain Aubrey (Anna Camp) is a crazed neurotic fascist control freak. They loathe each other, and as a result the team suffers. But, (surprise!) over time they confront their own limitations and personal weaknesses, become friends, and work together to win all the championships. Uplift, happiness, peppy concluding music, the end.

This is Hollywood formula: teammates always hate each other at first, then eventually find common ground and work together to a victory neither of them could have achieved alone. It's a pleasing, feel-good fantasy. And to see just how much of a fantasy it is, all you need to do is watch fashion reality show Project Runway.

Project Runway is an individual competition for the most part; 12-16 designers compete in a series of challenges to eventually win a single $100,000 prize. Some of the challenges, though, are team-based. And the team-based challenges don’t follow a Hollywood script. When teammates have intense personal conflict, they generally don’t pull together and end up with victory. Instead, more logically, they crash and burn.

This happens repeatedly. In Season 9, episode 7, a five-person team including Josh M. and Bert, two of the most egocentric and difficult personalities, starts out with Josh screaming at Bert for daring to say the word "fuck" and degenerates from there into a welter of bickering, recriminations, and shockingly ugly pattern choices. The only one who designs a decent outfit is Kimberly, who refuses to work with anyone else, ignores the group decisions, and just does her own thing.

In Season 8, episode 5, Gretchen does the neurotic fascist control freak thing, cementing her leadership by organized sneering at Michael Costello. The result is a sea of bland, and humiliating runway repudiations in which Gretchen talks on and on about how proud they all are of their designs and then completely reverses herself and talks on and on about what crappy work everyone else has done.

Tim Gunn, the show's mentor, ends the episode by telling the other designers on team Gretchen, "I don’t know why you allowed Gretchen to manipulate, control, and bully you. I don’t understand it." It is somewhat baffling to watch supposed adults embrace Lord of the Flies dynamics like they never left middle school.

But the truth is, anyone who's ever actually worked with other people know that other people suck. Folks out there (and sometimes in here) are insecure, mean, unforgiving, and lacking in anything resembling self-knowledge. You want to avoid them. And if at any point you have an intense conflict with someone, further contact is unlikely to lead to personal growth and lifelong friendship.

Though, to be fair, all Project Runway teams don't end up stabbing each other in the eye with knitting needles. The Season 9 team that competes against Josh and Bert and friends, and the Season 8 group that goes up against the demon Gretchen, both hit it off instantly and created excellent work—perhaps the best work of the season.

There was even one team up that kind of followed the Hollywood script. In one challenge, Michael Costello, who everyone had decided to hate, is teamed up with Mondo Guerro, a fantastically talented designer. Mondo is horrified; he’s convinced himself Michael C. can't sew. But after working with him, he discovers that (like everyone else) Michael C. is very talented—and eager to help Mondo realize his ideas. Mondo apologizes for being a jerk, and the two have become close friends.

Even that collaboration, though, had a twist or two. Michael C's garment was fabulous, but didn't win. Mondo's was cute too—but the judges hated it. Mondo got his lowest scores of the season. In Pitch Perfect, friendship and reconciliation leads to the championship, On Project Runway, it leads to mediocrity and failure.

Reality television isn't "real" in a direct or overarching way. The shows are edited and scripted; you see what the showrunner wants you to see, not the unvarnished actuality, whatever that might be. Still, there’s something true to life in the matter-of-fact, anti-Hollywood banality of the team challenges. People who get along right off the bat tend to do better work together. Difficult personalities remain difficult. And when hearts do change, it's only a personal miracle. Friendship and growth have to be their own reward. They don't necessarily get you points with the judges.