The Shallow Evil of Hitler

Hitler led the filmmakers astray in Look Who's Back. 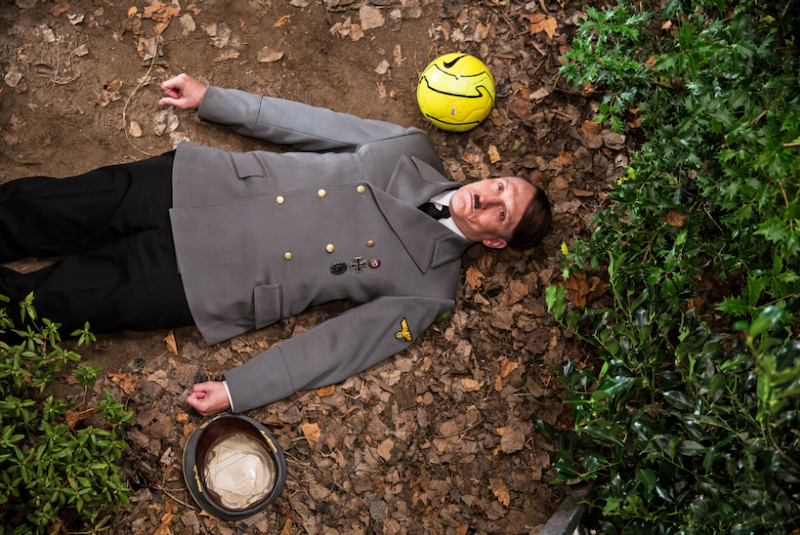 This is part of a series on fascism in film. The last entry on The White Ribbon is here.

It sometimes feels like fascism is the truth of humanity; the ugly, blind, snail-like, bile-vomiting malignancy that we each have in place of a soul. Fascism was defeated resoundingly in World War II, but it keeps crawling back, a regenerating cockroach-with-the-face-of-Trump.  Hatred and bigotry are the most real part of us; humanity keeps returning to them, like a dog eating its own shit. We can't get rid of Hitler; we love him too much.

That is, more or less, the argument of Look Who's Back, a 2015 German film about what happens when Hitler shows up in contemporary Germany. The Fuhrer (Oliver Masucci) wakes up in a park: he gets his underwear dry-cleaned; tries to communicate with the soccer-obsessed youth of today; and fights a small dog.

After these misadventures, though, Hitler becomes a media personality. People think he's a Hitler impersonator, and take his ranting against immigrants and outsiders as a joke and/or as wisdom. Media outlets rush to put him on air for the sake of ratings. Their enthusiasm for the impish fascist foreshadows cable news coverage of Trump. Similarly, Hitler's sneering takedowns of Angela Merkel and other mainstream politicians echoes a lot of 2016 campaign rhetoric on the left and the right. Those stodgy, smug Democrats; maybe we don't support Trump/Hitler, but at least they're giving the establishment what for, am I right?

Despite such perspicacity, Look Who's Back is only intermittently successful. The narrative takes some unfortunate detours into bathos. For example, towards the end an elderly Jewish woman sees through Hitler in a scene that’s as inevitable as it is irritating.

The best parts of the film, however, aren't to be found in these more or less expected set pieces, but in a series of unscripted vignettes. The filmmakers followed Masucci around Germany as he stayed in character, and filmed Germans interacting with "Hitler."

People, of course, knew that this was not the real Hitler. Many treat the pantomime as a joke. When Hitler (who famously trained as an artist) sets up an easel to draw caricatures, numerous people line up delightedly to pose. In other cases, the motivations of those who interact with Hitler are less clear. When the supposed Fuhrer drives by people on the sidewalks, a number give the Nazi salute. They could be playing along with the joke, perhaps. But would a Jewish, Polish, or Muslim person watching think the salutes were particularly funny?

Some go beyond symbolism, and tell Hitler that they support him. A number of Germans tell Hitler openly that they resent immigrants; one person agrees with him that it might be a good idea to set up camps. Another man asks the filmmakers to turn off the camera; they point it in another direction, but do not kill the audio. Then you hear the guy say that he'd probably follow Hitler "if you were really him."

The filmmakers find these sentiments horrifying, and they're not coy about saying so. The end of the movie is a montage of news clips of anti-immigrant violence. The nerdy, forgettable protagonist, who was responsible for Hitler's rise to media fame, shoots him atop a rooftop, only to have Hitler spring back to life. Hitler can't be killed, the man himself explains, because he lives in modern Germany, and in modern humanity. The filmmakers believe Hitler brings out people's real opinions. Or, to put it another way, deep down, people are really Hitler.

But how true is that? Is Nazism the essence of Germany, buried and waiting to break free? Is the recent electoral rejection of the far right simply a patina of good manners—a mask, beneath which lurks that little, ugly, black mustache?

Maybe. But other interpretations are possible. There are undoubtedly some in Germany who admire Hitler and would like to see the camps reinstated. But what's interesting about the footage with "Hitler" is how casually and thoughtlessly people interact with him. These are not ideological Nazis. They aren't revealing their true selves so much as they're playing along. Hitler shows up, and people ask themselves, well, how do you talk to Hitler? If someone is playing the part of Hitler, then the people on the street are going to play the part of Hitler enthusiasts.

Embracing racism as a lark is still embracing racism. Numerous Germans tell Hitler how much they hate immigrants, and how they would hurt them if they could. They 're joking around, but they're not exactly joking. But while their hatred is serious, it doesn't necessarily come from a deep place. The appearance of Hitler calls forth an appearance of hatred. People often hold political opinions very lightly. The public doesn't have real, committed views on the deficit—and they don't necessarily have real committed views on death camps either. Hate seems like it should be real, earnest, true. But the people interacting with fake Hitler don't seem real, earnest, or true. They seem like they're not thinking too hard. They're dress-up Nazis. They're taking their cues.

There is one person Hitler encounters who isn’t amused or chummy, but instead flat-out horrified. What you're doing is awful, he tells Hitler and the filmmakers. You should be ashamed. It's not exactly clear what the filmmakers think about that. Obviously, the guy doesn't understand that "Hitler" is anti-Hitler; he's not in on the joke. And yet, his outraged reaction is the right one. Everybody else treats Hitler as a joke, but this one guy wants to banish him. Playing at being Hitler isn't funny; it's despicable. The filmmakers, and Oliver Masucci, maybe should be ashamed of themselves.

Look Who's Back thinks it's exposing the deep-rooted fascism of the German people. But I think it's more likely that its Hitler goof nudged people to indulge in shallow fascism. Just as Trump's ascent has emboldened white supremacists in the United States, so making Hitler fun and funny can make passersby more comfortable expressing hatred in Germany. "This is why social and political sanctions against racism have historically been so important," Jamelle Bouie writes at Slate. "This is why we tolerate the public expression of racism at our own peril." We like to think free speech and the open exchange of ideas will lead us to reject bigotry. But open expressions of hatred, and lots of Hitler jokes, may just make people think that hatred, and Hitler, are socially acceptable.

Human beings are very adaptable; we don't have too many bone-deep impulses. We do have a tendency to follow along, though. We're not all little Hitlers, but if he shows up, we might ask him to draw our picture. Look Who's Back was intended to warn of the evil in all of us. But it's main effect may have been to make some people a bit more evil than they could’ve been had Hitler never showed up.