How Stranger Things defies stereotypical gender roles, and how it doesn't. 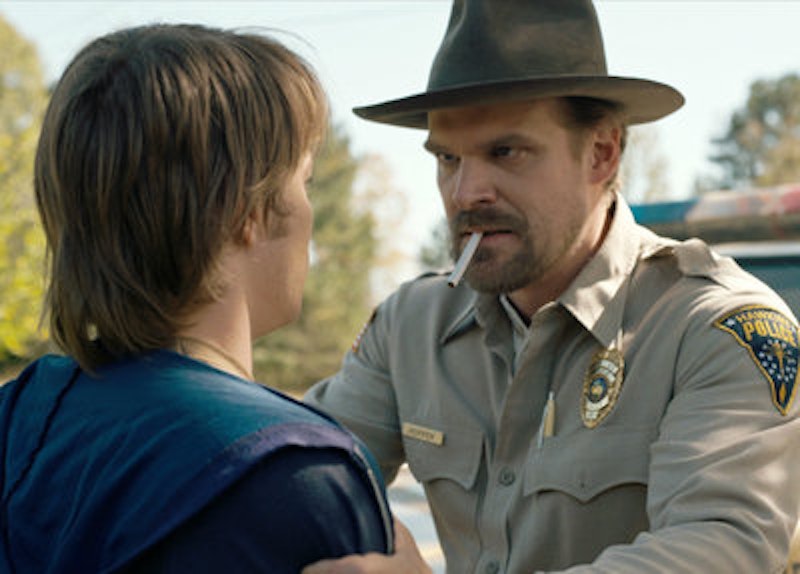 My favorite moment in the second season of Stranger Things occurs towards the end of the series, when Joyce Byers (Winona Ryder), Jonathan Byers (Charlie Heaton), and Nancy (Natalia Dyer) are exorcising the shadow thing from Will (Noah Schnapp). Will is in horrible pain, thrashing and screaming on the bed, but Joyce is implacable. Jonathan, on the other hand, is completely undone at seeing his brother in pain. He's so upset that he can't watch; he turns away from the bed to his girlfriend Nancy, and buries his face in her hair as she holds him.

Heroic males in mainstream media don't usually display that kind of vulnerability. In most adventure narratives, men respond to threats to their family by becoming violent, vengeful, and hyper-competent, not by asking their loved ones for comfort. And men are rarely put in situations where they’re more upset, or traumatized, than their girlfriends. Nancy cares about Will, but he isn't her brother; it makes sense that she'd be less upset, and Jonathan realizes that when he turns to her for help.

Jonathan isn't the only vulnerable male character in Stranger Things. The series has been criticized for its reliance on nostalgia for Spielberg, King, and other 1980s horror/fantasy cultural touchstones. Stranger Things differs from its source material, though, in its plethora of fully developed female characters—and in its willingness to let its male characters defer to, and rely on, those women and girls. Jane (formerly Eleven) played by Millie Bobby Brown, is the superhero of the series; a Carrie-figure who uses her powers to fight monsters, rather than to kill everyone at the prom. Jim Hopper (David Harbour) plays the big, buff cop who you'd expect to be the series' hero; instead, his main role in season 2 is to be repeatedly rescued and to admit to himself and to Jane that she doesn't actually need his protection.

Meanwhile Steve (Joe Keery), who starts off season 1 as a jerk jock, by Season 2 is a sweet and very vulnerable kid. Nancy breaks his heart when she tells him she doesn't love him in a drunken stupor, but he still makes sure she gets home safe—and commits himself to baby-sitting and watching out for her younger brother when she needs him. Doofy nerd Bob Newby (Sean Astin) doesn't just wear his heart on his sleeve—he pastes it on a billboard and strings lights around it. His puppy dog passion for Joyce is presented with amusement, but without mockery; he loves her, he loves her kids. He's sweet, and Stranger Things approves of guys who are sweet. Strong silent types need not apply.

Stranger Things shows just how limited the range of emotion for men in Hollywood, or on prestige TV, can be. Guys in Stranger Things aren't broken anti-heroes or complex sociopaths. They're allowed to care about other people and to need comfort. As a result, the struggle with the Upside Down isn't a coming of age story about attaining manhood, but a narrative about families and friends coming together, and about loving one another in the face of adversity.

That's the most positive interpretation, anyway. There's a less cheerful take too, epitomized by perhaps my least favorite scene in the series—the breakfast discussion in which Lucas (Caleb McLaughlin) asks his dad how he resolves arguments with his mother. Dad explains that he simply apologizes, since Lucas' mom is always right.

The male weakness here doesn't push back against adventure tropes; it simply adopts clichéd sitcom boilerplate. Relationships, in this formulation, are women's domain, and men need to defer to them. While it seems to affirm female power, it actually suggests that relationships simply aren't important enough to fight about. It's condescending to both men and women, both of whom are defined by stereotypical gender roles.

Stranger Things lets men be vulnerable and has numerous interesting and well-rounded female characters. But King and Spielberg still hover, which means that the show, almost despite itself, gives male perspectives privilege. The boy's-club-driven-apart-by-a-girl Beatles narrative from season one is reprised with a different girl in season two—does pop culture ever show a girl's club driven apart by a guy who wants to join? And, inevitably, it's always boys who experience unrequited love, or who long after a girl who may or may not want them. Jonathan and Steve are both in love with Nancy, who must choose between them. Dustin (Gaten Matarazzo) and Lucas both fall for Max (Sadie Sink) who must choose between them. Jane gets jealous when she thinks Max is interested in Mike (Finn Wolfhard), but it's a misunderstanding. Girls are desired, and you're supposed to sympathize with the sad boys who can't have them. Girls on the other hand always get what they want—unless, like Barb, what they want is another girl.

Sexism affects stories in a lot of ways. It insists that characters play out stereotyped gender roles—and here Stranger Things pushes against type, by letting its male characters be vulnerable, loving, and in need of comfort. But sexism also props up male perspectives and male desires. Here Stranger Things largely acquiesces in the standard script. And, in doing so, it unfortunately ends up reaffirming a lot of those stereotyped gender roles after all. It's moving and perhaps daring when Jonathan turns to Nancy for comfort. But it's undermined when the script throws a random girl at Will Byers at the end of the show as a kind of consolation prize for all his troubles. Do guys embrace women because women and men are human, and humans need one another? Or do guys embrace women because women are there to make men feel good? Stranger Things isn't as sure of the answer as I'd like it to be.