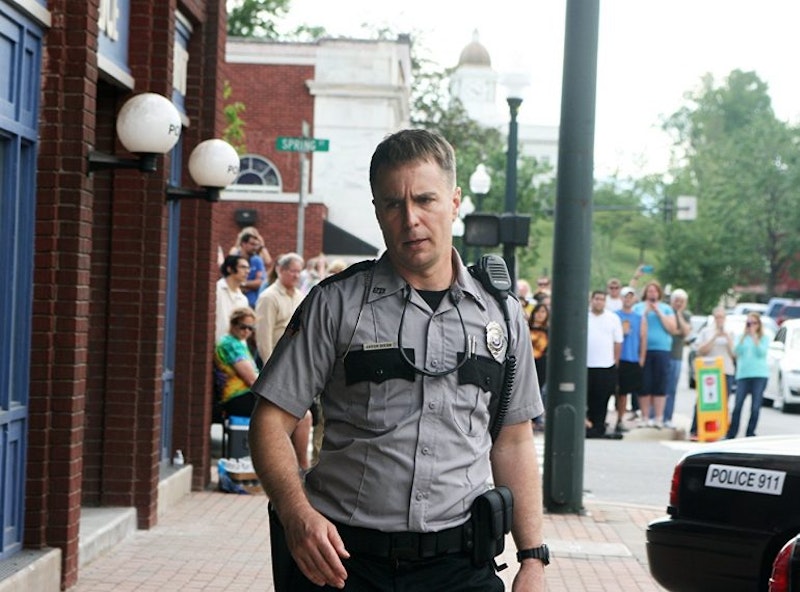 The Philadelphia Film Festival wrapped up Sunday, following 10 days and more than 100 films, including special sections on local and foreign films, and a mini-tribute to the late Jonathan Demme. Last year’s festival featured both Moonlight and La La Land, and once again the fest offered several films likely to come up in the awards conversation. Here are three of my favorites:

Three Billboards Outside Ebbing Missouri: an astonishing new film from director Martin McDonagh, deals with the topics of rape, murder, racism, cancer, suicide, police corruption, depression, alcoholism, small-town hopelessness, and the temptation and futility of revenge. The genius of McDonagh’s film is it’s tasteful, not patronizing, and consistently funny. A lot of movies try and fail to handle wild shifts in tone. Three Billboards has mastered just about all of them.

Three Billboards tells the story of Mildred (Frances McDormand), a divorced, working-class single mom in rural Missouri whose daughter was raped and murdered, seven months before the events of the film. With not a shred of progress in the case, Mildred takes out three billboards on a road outside town, calling out the local police (led by chief Woody Harrelson) for their inaction—a move that gets her on the bad side of the entire town. This also puts her at loggerheads with Jason Dixon (Sam Rockwell), a drunk, violent, racist, and incompetent cop who lives with his mom (Sandy Martin).

This plot description may give you an idea about what this film is, and that idea is probably wrong. It’s not a straight police procedural. It’s not a whodunit. It’s not a message movie or a social problem movie, nor does it have any particular political agenda, especially when it comes to the very of-the-moment questions of crime policy, sexual assault and police misconduct. I’m already sort of dreading the attempts to “solve” this film, or the very stupid “fan theories” that will do nothing but cast doubt on the film’s perfect ending.

What’s so special about Three Billboards is that it has genuine, sincere empathy for its characters, across the board. And while many movies give redemption arcs to characters who don’t deserve or earn them, this film has one of the most poignant such arcs ever. But beyond that, your feelings and sympathies for different characters may shift over the course of the film.

The screenplay, also by McDonagh, finds dark humor everywhere, much of it from McDormand’s understandable rage. It’s her best role since Fargo as the grieving mother who’s mostly emotionally inaccessible. Rockwell has never been better: he’s a guy who starts off as a despicable character but evolves into something else. Harrelson, in about his fifth standout performance of the past year, brings unexpected edge to the police chief character, while Lucas Hedges (from Manchester by the Sea and Lady Bird) is heartbreaking as McDormand’s son.

There are brief, welcome turns from the likes of Peter Dinklage, Zeljko Ivanek, and Caleb Landry Jones, and then in strolls Clarke Peters, playing a cop with that air of authority, just like he did for all those years on The Wire. Why isn’t Peters in movies all the time? McDonagh’s best-known film was another dark comedy, In Bruges, but this is on another level. It’s the best film that showed at the Philadelphia Film Festival, and the best American film of the year to date.

One of the many wonderful things about Lady Bird is that it so perfectly exemplifies the voice of its writer/director Greta Gerwig, even though it’s her first film as director—Gerwig’s acting persona is such that the through-line is clear. This is a true, confident work.

Since it’s about a young woman growing up in the early-2000s in Sacramento and attending Catholic school before moving to New York, as Gerwig did, Lady Bird is presumably autobiographical. But that doesn’t mean it’s solipsistic; just about everything in it rings true, even if your background is nothing like hers.

Lady Bird follows a year in the life of Christine McPherson (Saoirse Ronan), who goes by Lady Bird. It’s 2002, and she’s a senior at a Catholic high school in Sacramento, contemplating life, love, and future, alongside her mother (Laurie Metcalf) and father (Tracy Letts). The film is a sort of year-long slice-of-life tale, as Lady Bird weighs getting into college, romances two boys (the first of which is Lucas Hedges, also in Three Billboards), and comes to understandings about her relationship with her blue-collar mom (Metcalf, in a career-best performance).

There are lots of fine little touches, most notably Lady Bird’s foray into the high school theater clique, and her romancing of a second-act boyfriend Kyle (Timothée Chalamet.) He’s introduced as an obvious, swaggering bad boy, who reads Howard Zinn. We know this cultural type now: The Bro-gressive, the Bernie Bro, the “Brocialist”—there just weren’t any names for it yet in 2002.

Lady Bird is funny and poignant, Ronan, once again, is a delight, and Gerwig—who co-wrote many of her early mumblecore films, as well as her later collaborations with Noah Baumbach—has established herself right out of the gate as a distinctive voice.

Every film festival has a few hidden gems, and the most notable one at PFF this year was Alaska Is a Drag, a winning drama directed by Shaz Bennett. Based on a short of the same name from 2012, Alaska Is a Drag—as the title should possibly make obvious—is about an aspiring drag performer in rural Alaska. But it goes a lot deeper than that.

Martin L. Washington, Jr. plays Leo, who spends his days working in a fish cannery in Alaska and his nights aspiring to drag superstardom, at the region’s lone gay bar. But he’s also… really good at fighting, skills learned from Bruce Lee movies and the necessity of surviving as an undersized gay black kid in that sort of environment, so in addition to drag performances the film also has boxing scenes.

He’s supported, though, by his cancer-fighting twin sister Tristen (Maya Washington), and theirs is one of the more compassionate, lived-in brother/sister relationships on screen in recent memory.

It’s going to be compared to Moonlight, for obvious reasons. But Alaska Is a Drag is a fine, enjoyable achievement in its own right.