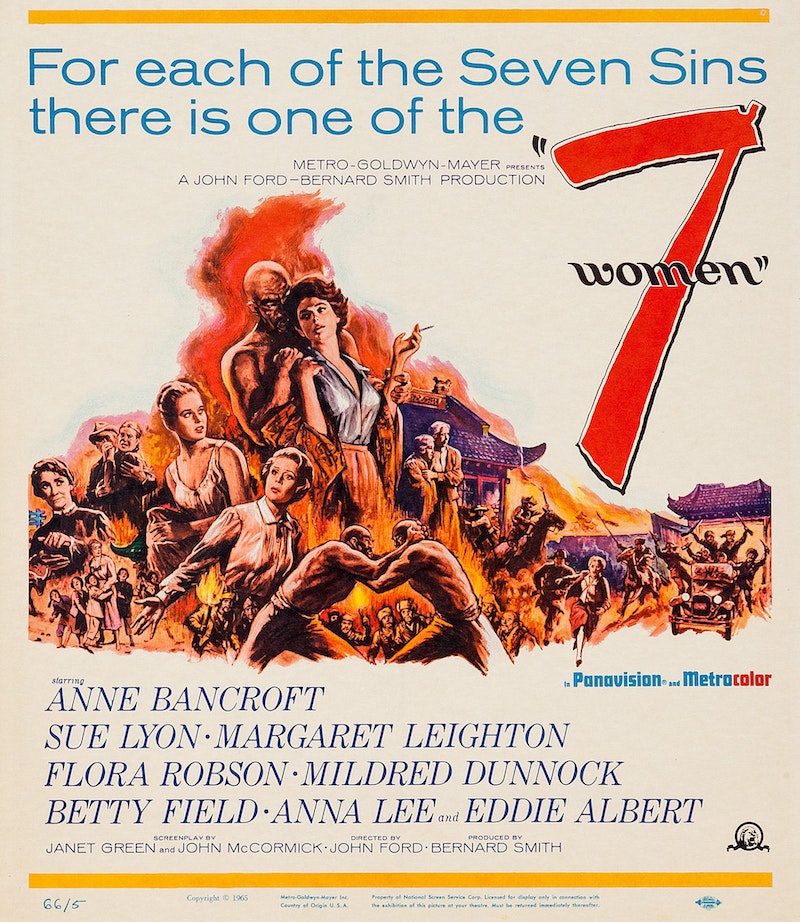 Although John Ford may be best remembered today for his sweeping vistas of Monument Valley (despite shooting far more of his filmography outside it), the things I find most beautiful in the work are his small gestures. Few filmmakers commanded such total control of performance and achieved such real but concentrated results. Capturing sculpturally precise, deceptively natural performances, Ford attended to actors with a degree of specificity that led actress Flora Robson to compare the movement to ballet.

I'd like to pay special attention to two moments from his final film 7 Women. Released in 1966, it was not well-received. The film, set in 1935, could not have been more of that year if it tried. Deliberately old-fashioned, its story of an American convent in China beset by infighting, disease, and bandits would have made perfect sense if produced in 1935, where it would have followed a series of films fixated on the "exotic Orient" like Thirteen Women, The Bitter Tea of General Yen and Shanghai Express.

Like those films, 7 Women is a women's picture of sorts, a bustling genre of the 1930s but antiquated by the 1960s. It feels like a lost film that couldn’t be released under the Hays Code (where sexuality in general and especially between races was stamped out whenever possible) but was left on a shelf to age, only to be picked up again in the mid-1960s as the Code was about to die. Despite, and in some instances because of these qualities, 7 Women is a masterpiece, one of Ford's finest, and as both Tag Gallagher and Joseph McBride write in their books, one of his most dynamic and vibrant. It is, however, difficult to see, and has never been released on DVD.

Let me then describe these moments without depriving them of their spontaneity and power. Dr. Cartwright (Anne Bancroft), a brilliant doctor and staunch atheist, arrives at the convent to "save" the women in it. They are largely deluded, deranged, or infantile. She first saves them and many of the Chinese peasants who live with them from plague. However, just as they realize the hopelessness of their situation in China, nightmarish and racially ambiguous Mongol bandits overwhelm them, man the convent, and take them prisoner.

Their protests that they are American are ignored. One of the women, too old, about to give birth, provokes Cartwright to plead with the bandit chief Tunga Khan for her medical equipment. He demands ransom. They have no such money to pay with. In lieu of money, Tunga Khan is willing to take Cartwright as his concubine. Cartwright accepts.

The scene where Cartwright returns to pay out the first amount of Tunga Khan's sexual extortion is shown below:

Populated at first by many, Tunga Khan orders them out.

Miss Ling is one of the women staying at the convent who the bandits took as a petty servant upon arrival, and as she passes, she very discreetly touches Cartwright on the wrist.

A small moment––largely diluted by shadow; the only other indication that it occurs is a slight shift in Anne Bancroft's eyes. Cartwright is, by this sacrifice, giving herself over to sexual slavery. Much can be said about the film's polluted sexual-racial politics (Ford’s friend and fellow filmmaker Sam Fuller took issue with the film, as McBride quotes in his book), but regardless of what may be made of the film’s attitude towards miscegenation, the film frames Cartwright’s sacrifice as sexual violence, outside of racial disgust. When Cartwright earlier, upon discovering Miss Ling alive and in servitude, asks if she is alright, Ling responds, with an emphatic wisdom, "I am alive." The unspoken remains so, as so often in Ford––sympathy between survivors is shared across racial boundaries.

So when Ling touches Cartwright later on, an immense emotional transaction occurs. When other women discover Cartwright's sacrificial decision, there’s shock, dismay, and disgust (the head of the convent compares her to the whore of Babylon). Ling’s response is stoic: nothing but the gentle touch on the wrist.

Cartwright leverages the sexual favors even further to provide the other women in the convent with an escape, trading herself for their safe departure. Cartwright’s final goodbye is with one of the less outspoken, more modest missionaries, Jane Argent (indeed, more of a Christian in her quiet way than the tyrannical head of the convent). She says goodbye, goes to the door, then returns to give Cartwright an embrace. She pulls away, and Cartwright suddenly grasps Miss Argent's arms and gives her a tender kiss on her cheek. Cartwright lets her hand slide into Miss Argent's, where it lingers for a long moment before they part.

Ford is not foreign to sentiment, but the frankness of these few seconds is uncharacteristic: Ford’s emotion is expressed in tender physicality previously reserved largely for lovers. 20 years earlier, Wyatt Earp’s chaste kiss on Clementine's cheek ended the preview cut of My Darling Clementine. That kiss was ironically shy, nervous in the face of feelings to come. The finality of Cartwright’s kiss is palpable, and the absence of men and maleness from the entire scenario, the lack of shame or shyness or reserve––there are no words.

That it ends with their hands enfolded in each other's, perhaps the least emotionally charged of the gestures on the surface, highlights its significance. Earlier in the film, as Cartwright prepares to submit, she stands stoic, with pride, back turned with no acknowledgement of anyone else in the room. When Miss Ling leaves, sharing that brief gesture, Cartwright is unprepared for it and cannot reciprocate. There is no lock of the eyes, no embrace, no moment of mutual understanding. Miss Ling gives what she can, and is gone.

In this last goodbye, Cartwright and Miss Argent have a long moment of shared recognition, of love, gratitude, charity, fear, hopelessness, trying to stave off the end with this little exchange of kindness. Cartwright gives her hand as much as she takes Miss Argent’s––today, in this long year of goodbyes and no goodbyes, we can only hope for ones as full as this.