The Pool’s Different at Night 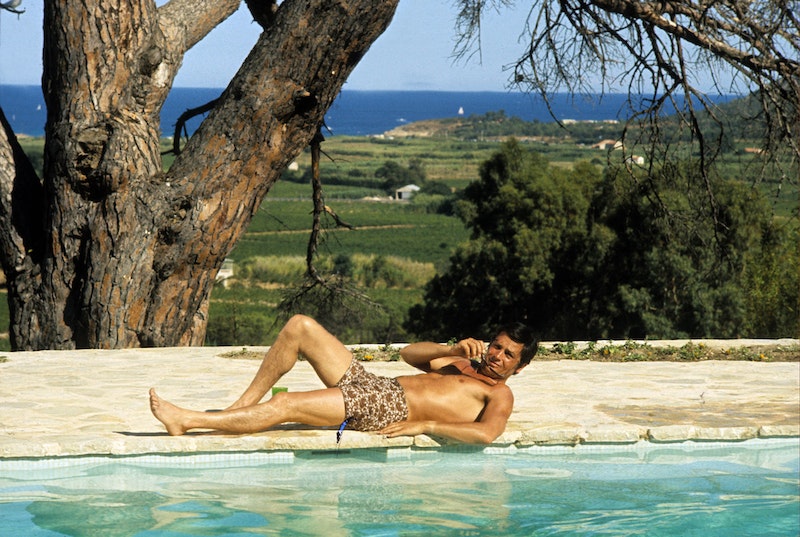 Jacques Deray’s La Piscine starts as a summer idyll brimming with sultry desire between Jean-Paul and Marianne, played by Alain Delon and Romy Schneider. While the couple has dated for over two years, they frolic and play like they’re still getting to know each other. Perfect tanned limbs dip into the pool where these French bohemians luxuriate and cool off. As I watch, I want to dive into the sun-drenched water for relief. Between Jean-Paul and Marianne, it’s all hedonism and sex until Harry (Maurice Ronet) roars into the Côte d’Azur villa in his new red Maserati, dubbed “the monster.

Jean-Paul, a failed writer, sees Harry’s success in full bloom. In the front seat sits Harry’s 18-year-old daughter Penelope, played by a wispy Jane Birkin. Jean-Paul wants to drive Harry’s Maserati, and Harry allow him to do so. As the car speeds through Mediterranean valleys, Deray weaves close-ups of Penelope walking in the forest and a nude Marianne resting on a white shag rug. This juxtaposition plays with the group’s strange power dynamic and poses the question, “Who has power over who?” The answer isn’t obvious. Jean-Paul is unabashedly envious, however, and with Harry being Marianne’s erstwhile lover, a grudge ensues.

During an impromptu midnight party set to Michel Legrand’s French pop, Harry and Marianne flirt and dance, as if no time has passed between them. Meanwhile, Jean-Paul takes to Penelope, enticed by her provocative charm. But when Marianne presses Jean-Paul about his thoughts on Penelope, he says, “She’s strange.” Marianne responds, “If I get you, I should pack my bags and leave.”

Later, Harry arrives to the villa drunk, and Jean-Paul, who’s been drinking alone poolside, confronts him and then drowns Harry in cold blood. By the movie’s end, an inspector lurches around the villa’s grounds to investigate Harry’s disappearance. Marianne and Jean-Paul insist it was a suicide. Yet as the alcohol-drenched evenings and carefree mornings dissipate, the ending emerges as autumnal. They’re forever trapped by their secret. La Piscine is a film where rich people behave badly and get away with it. These characters pose on chaise lounges, saunter around in chic clothes, cheat, and kill—learning nothing from their wrongdoing save for Pen, who never steps into the alluring pool.