How to Write a Godard Obit 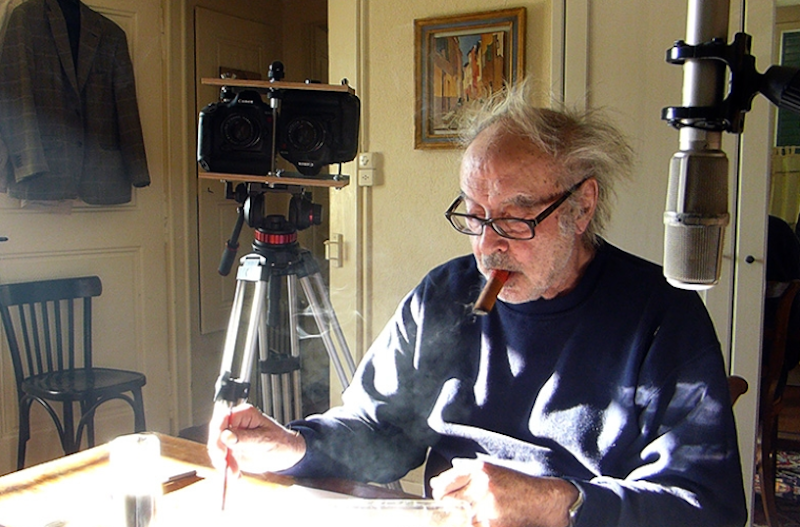 Were you at all anxious and bewildered by Jean-Luc Godard’s passing last week? Are you still unable to write about the tremendous shock you felt? Do you feel inadequate in addressing the career of such a divisive figure—a career that spans six decades and close to 100 works? Are you out of extensions on that overdue Godard obit? Here’s a guide to writing about the master, from another mainstream critic who definitely knows what he’s talking about.

1. Stick to the 60s: Recap the decade that defines the director for most people. Start just as Godard did, with Breathless. Say he “burst onto the scene” or some variation. Enumerate the film’s myriad innovations. Don’t forget to mention that he invented the jump cut. Continue to Le Petit Soldat. Don’t bother with the fact that it was unavailable until a few years after it was produced. Mention its controversial politics and three-year French ban, then quickly move on to the more seminal collaborations with his muse Anna Karina, like A Woman is a Woman and Vivre Sa Vie. Make special note of Bande à Part’s sprint through the Louvre. Note the subversive sci-fi of Godard’s most ambitious genre experiment, Alphaville. Use the untamed, feral genius of Pierrot le fou as occasion to discuss his failing relationship with Karina (more on that later). Use La Chinoise similarly to bring up his marriage to Anne Wiazemsky. Make some space for the non-Karina masterpieces like Contempt, 2 or 3 Things I Know About Her, Masculin Féminin, and A Married Woman. Devote more space to Week-end; note the long tracking shot of an apocalyptic traffic jam, the Hermes handbag, the end of cinema. Briefly note the Dziga Vertov Group without going into detail about the films, their ideological foundation, or who Dziga Vertov was. Make sure the section covering the 1960s is at least three times as long as the rest of the obit.

2. Quotations, Quotations: Reduce the insights of an artistic giant to easily digestible quotes: “The cinema is truth at 24 frames per second”; “A story should have a beginning, a middle and an end, but not necessarily in that order”; “At the cinema, we do not think—we are thought”; “All you need for a movie is a girl and a gun”; “I am a Marxist in the style of Groucho.” Ignore the irony that Godard’s work is more resistant to passive consumption than that of any modern filmmaker. Use BrainyQuote if necessary.

3. Focus on France: Disregard the 1970s, with the possible exception of Tout va bien, the Dziga Vertov Group’s collaboration with Jane Fonda (a famous person). Forget about the fruitful, decades-long creative partnership with his later wife Anne-Marie Miéville, including their radical video and television work, as it only complicates Godard’s reputation as a misogynist and artistic totalitarian (more on this later). Ignore his Swiss lineage, as it only complicates his status as a preeminent figure of the nouvelle vague. Devote as little space as possible to his Swiss productions (basically everything from 1980 onward). If necessary, call Every Man For Himself “Godard’s return to narrative filmmaking” and mention the Pope John Paul II’s condemnation of Hail Mary. Compare Histoire(s) du cinéma to Finnegan’s Wake, pejoratively if possible. Pretend to have seen all Godard’s Swiss productions, and insist that they aren’t worth discussing in detail.

4. Be Balanced: Portray Godard’s late career work as that of a consummate crank. Acknowledge his visionary talent but insist that it was squandered or misplaced. Create the illusion of impartiality by attacking his character while maintaining distanced reverence. Begin with his relationships with women. Characterize his marriages to Karina and Wiazemsky as abusive without using that word; words like “cold,” “cruel,” and “tyrannical” will suffice. Never mind the empathy for women evident in films like Vivre Sa Vie, A Married Woman, Numéro Deux, Every Man For Himself, First Name: Carmen, and Hail Mary. Be sure to mention the scene at the end of Faces Places where an offscreen Godard wisely chooses not to participate and makes Agnès Varda cry (bonus points for a GIF of her calling him a dirty rat). Never mind that this is the only remotely entertaining scene in the film. Move on to accusations of anti-Semitism. Never mind that Godard took the Holocaust (as well as cinema’s failure to adequately depict the scale of the atrocity, the central preoccupation of his career) as seriously as any of his contemporaries, or that he was always clear in his distinction between the anti-Semitism he stood accused of and his professed, unabashed anti-Zionism. Mention his idiosyncratic and often alienating methods of directing (bonus points for quotations from Yves Montand’s angry letter to Godard and Jean-Pierre Gorin). Never mind that these methods produced films unlike any others. Accept and deny his artistic primacy simultaneously.

5. Have Fun: Take it from the expert: it’s what Jean-Luc would have wanted.