A Typist at Auschwitz

For five minutes after its twist, Don’t Worry Darling almost becomes something Godard and Wilder dreamed about. 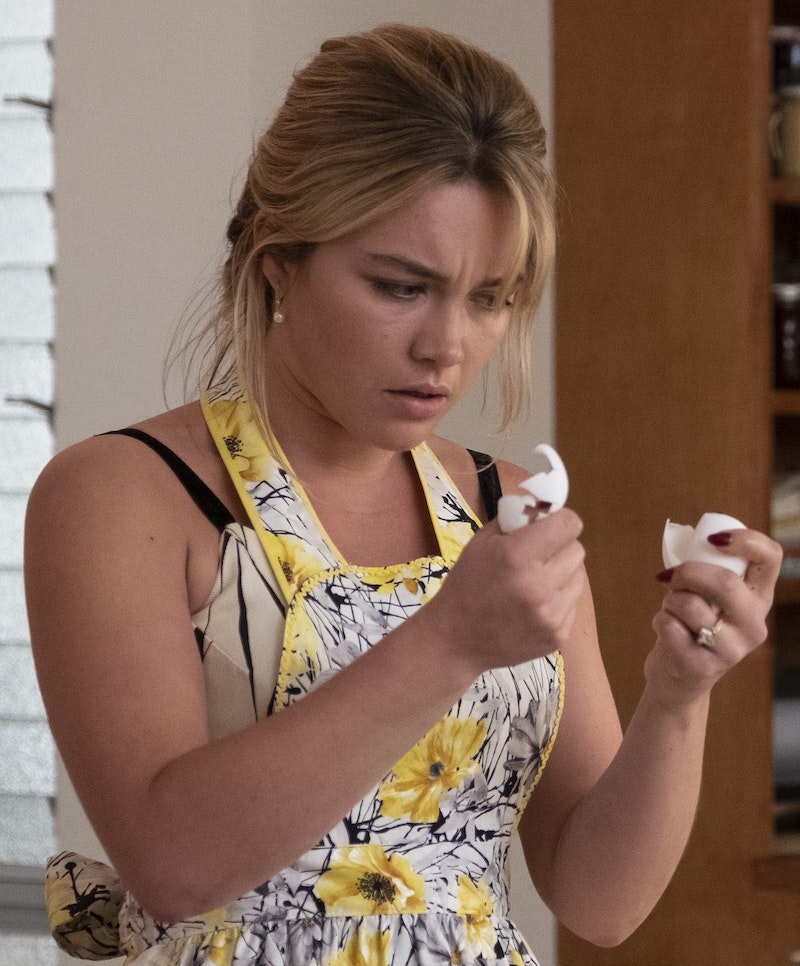 Almost all of the writing and reporting on Olivia Wilde’s Don’t Worry Darling leading up to its release this past Friday suggested that the movie’s dysfunctional production would make it tank—as if audiences have ever resisted cinematic rubbernecking. Rumors had star Florence Pugh pitted against her co-stars Harry Styles and Wilde, who became a couple during production. Again, something as common as the close-up in cinema, but according to Chris Lee, “Olivia and Harry would just disappear.” During the director’s “unexplained absences,” Pugh and cinematographer Matthew Libatique allegedly directed in her place. People have sex and fall in love on movie sets, but you’ve got to continue making the movie. Another person “close to the production” told Vulture that, “Olivia is either a mad genius who figured out a way to make people more aware of the movie in a way that just drives up the box office, or she doesn’t have any self-awareness that she is fucking up her movie.”

I think Wilde got lucky and somehow face-planted upwards, because even if her career as a filmmaker has been severely damaged in the past year, Don’t Worry Darling won’t bomb. Warner Bros. is putting it out, and under David Zaslav, it will play in movie theaters for months before it goes to streaming. I saw blind items about this movie being “so bad” that it was going to go straight to HBO Max, but all of that stuff was just puff for what looked like a dud on the inside. Don’t get me wrong, and don’t listen to Richard Brody: Don’t Worry Darling is just as bad as the other two Stepford Wives, and besides five minutes after the twist is revealed, the film is more reheated post-Trump liberal feminist babble that challenges no one and criticizes nothing.

You’ve seen the trailer, or read the press, so you know the first two-thirds of Don’t Worry Darling take place in some utopian 1950s-style planned community, and something just ain’t right. Pugh is married to Styles, and they live on a cul-de-sac with all of the other husbands and wives straight out of Mad Men. The 1950s America on display in Don’t Worry Darling is a flat and illegible seventh-generation collection of signs and symbols gleaned entirely from 21st-century media about the 1950s. Even if it betrays the fundamental mediocrity of the script, it works for the story: this is all fake, as the trailers have told us for weeks now. Pugh eventually escapes the idyllic town of “Victory” and, after a montage of her in a hospital bed and in surgery, the movie smash cuts to a grim ICU in what looks like “the present,” and Pugh, in scrubs, walks out of the room. “Tied another one up.”

Pugh comes home to a disgusting looking Styles, a greasy coder in front of his multiple screens, seething with resentment. He wants to spend time with her (and sleep with her), but she’s exhausted, she’s been sewing people up all day. During these five minutes after we first leave the world of Victory, Don’t Worry Darling almost becomes something amazing, a movie that Jean-Luc Godard and Billy Wilder dreamed of making: a relationship drama about a couple working in a death camp. When Pugh walks out of that room as a surgeon, you think she’s just finished operating on her own robot/cyborg/whatever body, and even after we see greasy Styles, it appears as though these people are just functionaries in a much larger government experiment involving human subjects, artificial intelligence, virtual reality, and consciousness.

All of it is unethical, and for those five minutes, you’re left struck dead with eyes wide open. That kind of dislocation is powerful, but movies rarely try it because it’s so upsetting to the audience. But imagine a film where Pugh and Styles’ fake 1950s relationship drama was suddenly transposed to the bleak “present,” where they have to scrounge just to survive, lucky to be the people who haven’t been shoved into this 21st-century Holocaust. What an incredible film it would be to watch these two people play out their lost love, an eternally relevant subject for drama, against a vast spiritual garbage that looms in the background. You could still reach the same conclusion, that men and patriarchy have produced a world barren of sunlight and love, all while their bodies curl into the crooked hunchbacks of coders who refuse to shower and only wear hoodies.

Instead, Don’t Worry Darling ends with a pro-forma chase scene and a bunch of exposition dumps that destroy what could’ve been a really unsettling twist. That’s the movie worth tanking your career over, not this one.