Faust Will Not Refuse 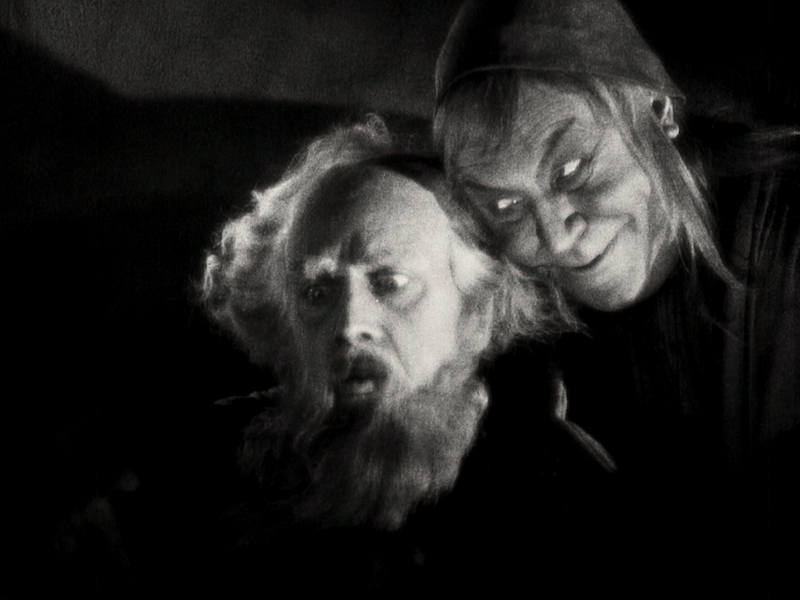 Humans tend to make themselves into gods or beasts. We’re neither but the desire to become a god in some form, to have unlimited power and strength always ends tragically. After the initial dark enchantment, man finds out quickly that power almost always leads to destruction, his own or someone else’s.

F. W. Murnau explores the light and darkness of the human heart in his film, Faust (1926). Drawing mostly from Goethe’s work, Murnau brings to life Mephisto (Emil Jannings), a devil who makes a bet with an angel that he’ll steal the soul of one man and destroy everything within him which is divine. The man in question is Faust, an old sage and an alchemist.

The plague is raging through the village and people are seeking healing and advice from Faust. He spends days and nights in his laboratory trying to mix the healing potion that will save lives. But he continuously fails. Faust is losing his patience and more importantly, faith in God. Why would God permit such suffering? In anger and resignation, Faust throws his alchemy books and the Bible into the fire.

In this moment, Mephisto appears and tells him that he will provide the cure if he completely gives in to him. Mephisto tries to make this bargain with the devil less ominous: Faust can have a trial period of 24 hours. If he’s not “satisfied” with what Mephisto offers, then he can make the deal null and void.

Mephisto knows that Faust will not refuse. He continues to subject his free will to Mephisto, especially when Faust receives the gift of youth. After a series of casual love affairs and endless parties, Faust grows tired but he can’t leave the pact. His soul appears to be in Mephisto’s possession.

In order to make things more interesting for himself, Mephisto attacks the innocence of a young woman, Gretchen. She falls in love with Faust and the pair consummate their love before marriage. This was Mephisto’s intention all along but it doesn’t end there. He wants the final destruction. Not only is Gretchen shunned by the entire village, her child dies in the snowstorm, and she’s accused of murder. Her destiny is to be burned alive on the stake.

Mephisto is pleased with himself but he hasn’t counted on one thing: love. The love that Gretchen and Faust have for one another is stronger than Mephisto’s evil acts. It triumphs because Gretchen recognizes Faust’s youth in his old man visage and because Faust joins her in death.

Faust was a costly film, and Murnau didn’t spare any expense. He was relentless on the set, filming one take after another until he reached perfection. Yet somehow, the actors accepted his mistreatment in order to reach the aesthetic heights Murnau had in mind. Faust is an emotional film. The sheer realism that Murnau creates is continuously illuminated despite the play with shadows and even abstractions. It’s persuasive: we’re meant to experience everything that Gretchen’s feeling. The film induces empathy, compassion, and even tears. Yet the audiences in Germany were unmoved. According to Siegfried Kracauer, “While the film had considerable success abroad, it met with indifference in Germany itself. The Germans of the time did not take to Faustian problems…” It goes without saying that the film has stood the test of time.

Murnau’s aesthetic realism had a price. The actors were exhausted. Camilla Horn, who plays Gretchen, recalled in her memoir that Murnau depleted her being. He purposely starved her so that she’d be so visibly tired for the scene in which she’s burned at the stake. In addition, Horn’s skin (especially her face) was incredibly dry from all the salt that was poured onto her to simulate the snow. Yet she kept going, slavishly accepting Murnau’s mistreatment.

One of the film’s achievements is Emil Jannings’ performance as Mephisto. There’s no visage of an old, confused, and pitiful man we see in Josef von Sternberg’s The Blue Angel (1930). Jannings takes the actor’s duty to another level. This is a theatrical and operatic performance. He’s a force of dark magic and aesthetics. In many ways, one thing that continuously triumphs in Faust is aesthetics.

The experience represents one movement after another (much like in an opera) of pure emotion, pure desire, pure beauty. Man’s at the mercy of romance, mountain peaks, and a constant pull into nature. But what kind of nature? Is it one that overwhelms the body and the mind, which only leads to sorrow? Is it one that doesn’t care about one’s fellow man, one that rejects morality and ethics? This is the ultimate tension of Faust.

“Am I a god? Light grows this page–

In these pure lines my eye can see

Creative nature spread in front of me.

But now I grasp the meaning of the sage:

‘The realm of spirits is not far away;

Your mind is closed, your heart is dead.

In heaven’s dawn your mortal head.’”

The game of darkness and light is dangerous to play. The temptation to be god is strong but love is stronger than death.