Pearl is a very good collaboration between Ti West and Mia Goth, miles better than X in every way. 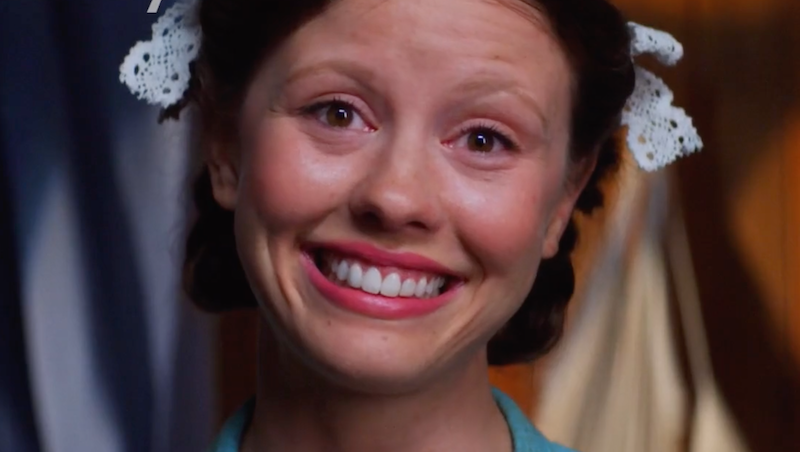 I saw Ti West’s X in April at the Charles here in Baltimore. It was a late night Saturday screening towards the end of its run, but I “ran into” a few people I know in that shoebox Theater 3, where everything ends its run (or something like Vortex or Both Sides of the Blade will play for one week and disappear). The movie was so lumbering and dull, and like I wrote a few months ago, it had no surprises. We all talked afterwards trying to figure out what was supposed to be so scary about the decrepit “Pearl” having an intimate moment. X got a lot of its “horror” from old people, and despite being set in the 1970s with a porno shoot setup, it never connects the dots on whatever it’s trying to say about the human body, sex, and death. Not that West expects anyone to get their primary thrills from heady analysis, but what have I got left when the kills suck and the pacing is wrecked?

Luckily, West and star Mia Goth shot a prequel back-to-back with X called Pearl, where Goth once again plays that woman, this time without any prosthetics and in the year 1918. Spanish flu is raging and Pearl’s German mother is anxious for good reason: her husband was paralyzed by the plague, so she’s become, as she screams later on, “not a wife, but a nurse.” Goth’s ghastly performance as the elderly Pearl in X is only worth revisiting after seeing this movie, one that’s better in every way. I hadn’t seen any of West’s films before X, and even though I didn’t like it, I loved that he made another one with Goth right away. Pearl has the energy and clarity of a piece written very quickly; without knowing whether or not A24 would green-light a prequel, West wrote with Goth and created, “at worst,” a very detailed backstory for Pearl.

If X was a cookie-cutter slasher, Pearl is something else: a Douglas Sirk horror/revenge movie featuring one of the best lead performances of the year. Goth plays Pearl like an evil Shelley Duvall, a naive farmhand one moment and then a verbal (and quickly physical) assassin. Anybody could’ve made X in the nearly 50 years that have passed since the release of The Texas Chain Saw Massacre. It’s not a good script. Goth’s collaboration with West on Pearl paid dividends, as the movie is freer, more inventive, suspenseful, and powerful. It’s enough that West and Goth made two movies about the same character back-to-back; Pearl wouldn’t have anywhere near the same effect not because you know her fate, but these are the same sets, the same actors, the same New Zealand-for-Middle-America landscape as X. Any time the same actor plays the same character at different ages, or their own children or parents, something amazing is happening that only cinema can do.

Goth gives a long monologue to a friend she’s going to murder soon about how “there’s something wrong with me… I feel like everyone else in the whole world has something that I don’t, and it makes me different.” It’s an astonishing scene, one that runs uninterrupted without any drag from Goth. She’s just soaring in this movie. The final shot is another uninterrupted stunner, a close-up on Goth’s cackling face that kept everyone in the theater and eventually made everyone laugh as hysterically as Pearl. Before the teaser for West and Goth’s third collaboration (MaXXXine) played, someone yelled out “PEARL, I LOVE YOU, YOU CRAZY BITCH!” Yes, ma’am!