Once You Leak a Video

Do Revenge is too timid to live up to its title. 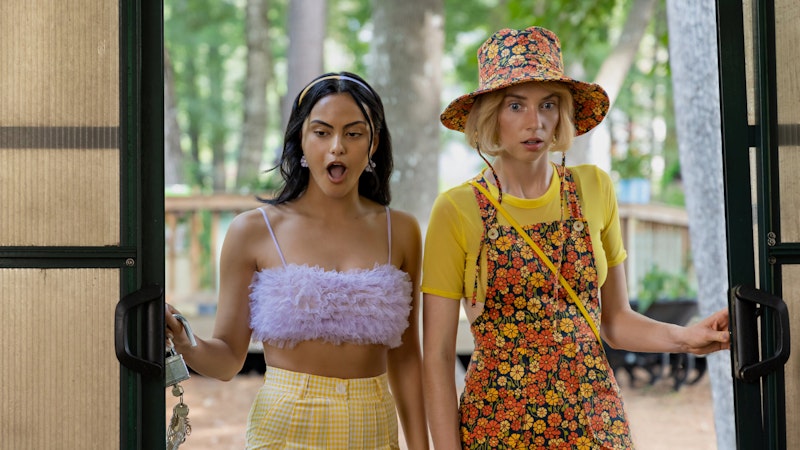 Revenge movies don’t require much. You can go anywhere with anyone for 80 minutes or four hours—as long as the mission is accomplished. The audience must see someone pay, usually with their life. The best revenge movies—Vigilante, Rolling Thunder, The “Human” Factor—have such horrifying lows that their explosive climaxes are all the more orgasmic. Who would dispute that a roving gang of sinister family murderers getting slaughtered themselves by the surviving fathers would make for anything less than a good movie; I don’t think you can make something bad out of that premise. But only as long as we see blood spilled. Instead of sucking his own gun, George Kennedy finds and kills the terrorist cel that wiped his wife and kids out. Robert Forster joins a secret band of vigilante cops to mow down the guys that killed his family. William Devane tells Tommy Lee Jones he’s found the men that murdered his son. A pause, and then a synth sting. Jones replies, monotone: “I’ll just get my gear.”

Do Revenge, despite its title, isn’t a revenge movie. Loosely based on Hitchcock’s Strangers on a Train, the film follows Drea (Camila Mendes) and Eleanor (Maya Hawke) through their senior year at a Barbie-toned Technicolor high school for rich kids in Miami. Before the opening titles, Drea’s boyfriend Max (Austin Abrams) leaks a naked video of her and sends it to the entire school. Drea, a token poor girl on scholarship, is disciplined and Max isn’t. The headmaster (Sarah Michelle Gellar) explains, without even convincing the audience, that a young woman sucker-punching a young man is worse than that young man leaking a naked video of his girlfriend. In 2022, Yale would take her side even if she shot him in the face (as they should).

We learn everything about Drea, and eventually Eleanor, through voiceover. Do Revenge, directed and co-written by Jennifer Kaytin Robinson, has nothing in common with revenge movies or Kill Bill, the most significant recent example. This is the first time I’ve seen Hawke in a leading role, and the similarities between her and her mother are greater than Kirk and Michael Douglas—she looks like The Bride at the end of Volume 2. She’s very good, and so is Mendes, but they’re betrayed by the script, an endless stream of undigested buzzwords and trends that have already dated and jokes that were never funny. Do Revenge is much closer to the mid-to-late-1990s cycle of teenage mischief movies, from Clueless to Cruel Intentions. Gellar’s presence is an obvious nod to the latter, along with a brief shot of a student reading Dangerous Liaisons, but Do Revenge is hobbled by its self-censorship and essential timidity.

The basic premise of Patricia Highsmith’s novel is fantastic: two people meet in public. One expresses a wish they don’t really mean, and the other takes it literally. In both Strangers on a Train and 1969’s Once You Kiss a Stranger, the wish is murder. Robert Walker strangles a woman in the woods, and Carol Lynley runs a man over with a golf cart. They come back to their “partners” eager to collect on the murder they’re owed. In both instances, you’re dealing with a sociopath, and there are no sociopaths in Do Revenge. Rather than allowing either Mendes or Hawke to just be evil, Robinson has them team up after two hours of dead ends and limp tricks. Max is the sociopath, but no one dies, no one loses anything except their status. But even as a social satire or tragedy like The Age of Innocence, Do Revenge tries to make everyone happy and leaves no one satisfied at all.

You want to see Max die. At various points, you want to see Drea, or her mean girlfriends, die. But none do. None of them are even half as cutting, mean, or witty as the doomed prophets of Cruel Intentions, or a half as charming as Alicia Silverstone. All of their conversations are drowning in academic jargon and prompts about consent, trauma, and what’s right and what’s wrong. Do Revenge isn’t a revenge movie, nor a high school comedy, nor social commentary. Imagine showing this movie to the cast and crew of Heathers in 1987. They would’ve shot themselves for real.