The Palliative Nostalgia of Gilmore Girls

And why the Netflix reunion will ruin the fantasy. 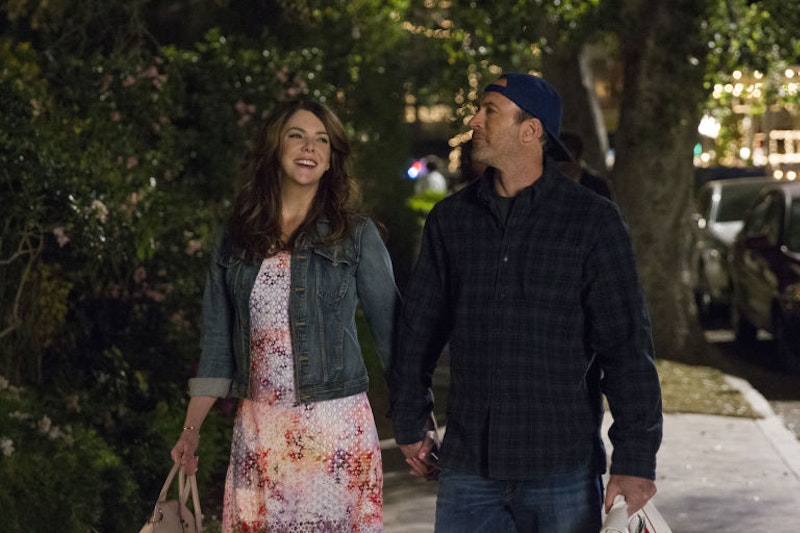 Netflix debuts Gilmore Girls: A Year in the Life one week from today, right in the middle of Thanksgiving break, giving Millennials an opportunity for an uninterrupted six-hour chunk of pure nostalgic fluff. Like most of the people anticipating this new miniseries, I discovered Gilmore Girls only a couple of years ago while lying in bed, comforter wrapped around me like a burrito, looking for a streamable anesthetic to knock me into a Netflix stupor and suppress any anxiety about my upcoming Principles of Microeconomics midterm. And that's who this reunion is for: not the people who followed the show on the WB when it originally aired, but the ones who found it online in search of palliative nostalgia. They're the reason this project even exists.

Except, unlike every young white woman on my Twitter timeline, I'm not excited for the reunion. I quit after season three; binging left me ill. Also, it looks terrible. While the Gilmores' rapid-fire wit is a signature of the show, the actors have clearly lost their momentum, and, for the first time, Amy Sherman-Palladino's lines tumble awkwardly out of their mouths. The ultra-high-definition cameras don't help, either. The sets—especially Lorelai's house—look like just that: sets; tacky ones, too. They only assist in destroying the fantasy.

Because, ultimately, Gilmore Girls is a fantasy. The elevated dialogue is bad—only John Green characters are more articulate than Lorelai and Rory—but the town itself is even more ridiculous: Stars Hollow, the cozy Connecticut village where seemingly 30 people live, couldn't possibly function in real life. This same fantasy logic is what allows a series like Friends to endure: that ensemble of good-looking white people live in a fictional Manhattan, the same one we daydream about on our way to work or class.

And that's where the Gilmore Girls' appeal lies: it's an escape to a simpler world, where no one has trouble producing a witty retort, where you can drink six cups of coffee without feeling nauseated, where your neighbors are zany and attractive and always available when you need them. The concept was ridiculous when the show premiered in 2000, but it's simply outrageous today. The worst part is that A Year in the Life will probably try to reckon with that. Part of the charm of watching Gilmore Girls in the 2010s is seeing Rory rent DVDs or order pizza on the landline. How will you feel when Emily starts swiping through Tinder on her iPhone?

The time jump disturbs the illusion. A reunion rarely expands on the original, or stands as its equal. It can do one of two things: attempt to move the story forward, like the misguided and depressing fourth season of Arrested Development; or repeat the past to the point of self-parody, like Fuller House. Why do people even want to see Lorelai and Rory, 10 years older, navigating the same situations, except with a few on-the-nose 2016 tweaks added? Isn't seven seasons enough?