All the Articulate Teens

The Edge of Seventeen swerves away from traditional teen movie clichés. 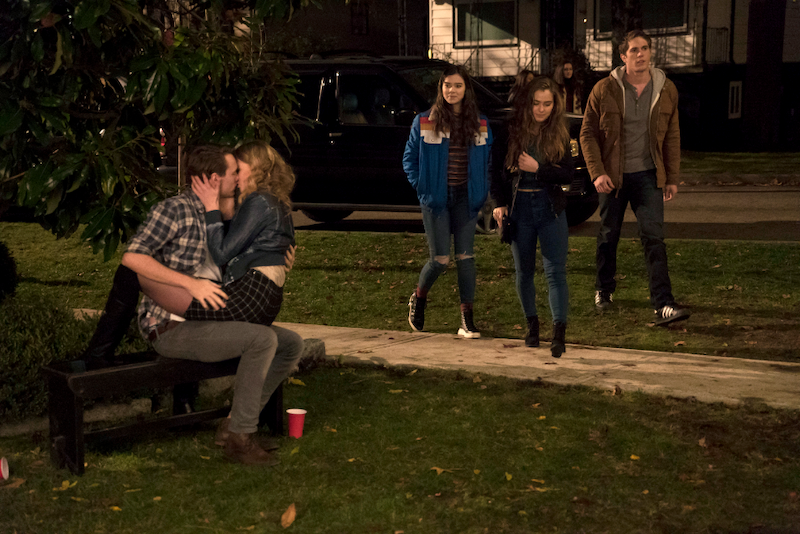 Kelly Fremon Craig's The Edge of Seventeen opens with the requisite teen movie voice: "There are two types of people in this world," Nadine, played by Hailee Steinfeld, says, before categorizing humans as either "popular" or "unpopular." She identifies as the latter. Surprise!

Every teen movie begins with a panoramic sweep of a high school cafeteria—"feeding time at the trough," the precociously sardonic protagonist might quip—defining cliques with zoological precision. Clueless, Mean Girls, Me & Earl & The Dying Girl… they all indulge in this expository cliché. At least 10 Things I Hate About You had the nerve to go absurdist with Padua High's clique of trashcan lassoing cowboys and cufflink'd future MBAs. I watched all of these movies as a high schooler and could never reconcile how this cliché developed in the first place: cliques are real, sure, but they're amorphous and mercurial; have you ever asked a teenager who they hang out with? The answer changes twice a month. The set up builds tension—it establishes the "Us vs. Them" narrative that underpins most teen movies—but it's too easy: the world, not even the societal microcosm that is high school, can be broken down so neatly.

Craig manages to find a new use for the trope, though. Nadine's sweeping generalization doesn't tell us about her world so much as it does her personality. She's solipsistic, always the victim. She believes her brother Darian, played by Blake Jenner, was destined to be the more attractive, charming, successful sibling. It makes sense that she'd divide the world into two types of people—she's a cynical (and yes, precocious) teenager who thinks the world’s out to get her.

Despite all this, Nadine is one of the most sympathetic teen movie protagonists in the last 30 years. She has the wit of Ferris Bueller, without the self-confidence or overall greasiness, and the emotional depth of Charlie, from The Perks of Being a Wallflower, without the cringe-inducing sincerity. And her cynicism is justified: if Nadine acts like a victim, that's because she is one; her dad dies when she turns 13, her mom teeters on hysterical, and her best and only friend starts dating her brother.

Craig, to her credit, bucks the adult impulse to take teenage complaints as hyperbole, without allowing the film to devolve into adolescent melodrama. Nadine's spazz-outs—and there are many—do not ring solely as immature or justified, but a combination of the two. I understood Nadine's impulse to steal her mom's car, but also empathized with her mom, a middle-aged woman trying not to make a scene at work while figuring out how she'll get home.

And maybe that explains The Edge of Seventeen's success: it's the rare teen movie that presents an adult perspective, too. Nadine's mom isn't portrayed as a villain, but as a complicated woman still grappling with her husband's death, four years after the fact. There's also Woody Harrelson's character, a hardened and shockingly ineffective history teacher who trades endearing disses with Nadine.

Many teen movie tropes survive—Nadine is too articulate for her age; the "nerds" are all gorgeous—but Nadine feels so much more genuine than John Hughes' two-dimensional protagonists or Amy Heckerling's on-the-nose caricatures.