Loving is nothing more than a civil rights cipher. 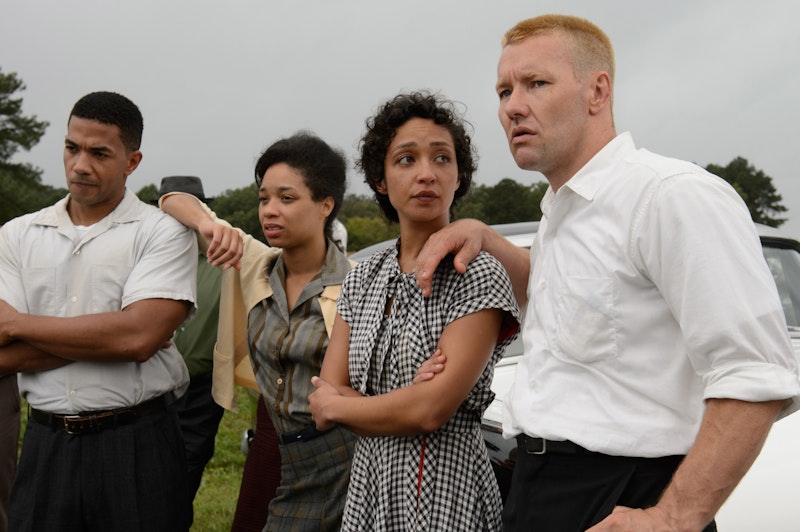 Have I seen any good movies recently? Not really: with the lucky exception of Certain Women, Moonlight, and Arrival all in a row, nothing but garbage. Television is good now, movies are bad, blah blah bore bore. I loved Black Mirror and liked Stranger Things, but I would’ve rather seen them in a movie theater. I know this is impossible, but isn't keeping us holed up in our houses and apartments for hours, even days, watching an eight-hour mini-series bad for the economy? Movie and a date? Netflix and chill? The latter might be saving us money, but Christ, can’t you fuck and eat ice cream? I can’t deny that the talent and resources and excitement going into premium and streaming television is running over while movie theaters are growing dry, and more often than ever it feels like an obligation. The movie theater is my church, and now it actually feels like sitting through Sunday mass. Miles Teller and his bullshit crusty mustache do not deserve my attention or my money, but I have the guilt. I must not miss a weekend. Looking forward to Tom Ford’s Nocturnal Animals on Thanksgiving Day. Maybe more fashion designers should make movies, too.

So the straw that broke the streak after Arrival was Loving, a movie so lifeless and devoid of pathos or energy, your doctor might recommend it as a more holistic alternative to Klonopin. Even when it’s forced, how can you not make this shit heart-wrenching? Young lovers ripped apart by the state because of the color of their skin? The mid-20th century scandal of interracial marriage and procreation? Oh, I can see it now: sweat dripping off the white man’s face, his hands chapped red from gripping the bars of his cell calling out for his wife, a black woman, incarcerated and separated from her husband by the commonwealth of Virginia… and that’s when the cops come to release him and keep her in, and all the screaming and teeth-gnashing and sucker punches and re-arrests and the couple screaming for each other. At least The Birth of a Nation made period guilt pieces fun and pulpy: all the white people were disgusting, crusty, oozing pus, and when they died in the rebellion—Oh! Their heads smashed like watermelons! It was a glorious feeling. Even if Nate Parker’s Oscars aspirations were far-fetched and comical to begin with, at least he made a decent Quentin Tarantino movie, instead of some brutal bore like Loving.

There’s not much to say about a movie that comes composed of ciphers and signposts, a movie called Loving based on the Supreme Court case Loving v. Virginia (you can’t get more poetic!). Joel Edgerton and Ruth Negga play Richard and Mildred Loving, a white man and a black woman in love in Virginia in the late 1950s and 60s. It’s infuriating to think that just over 50 years ago, we had suspiciously fey Virginian cops barging into a married couple’s home in the middle of the night and locking them up and persecuting them simply for being together. Yet none of that white hot passion and anger comes across in Jeff Nichols’ second picture of the year—I guess Midnight Special was shelved for a bit? The only other movie of his that I’ve seen is Mud, dull as dishwater just like this Loving.

There’s a difference between the quiet grace of Kelly Reichardt’s Certain Women, and the numb, cold isolation of Nichols’ Loving, where we learn absolutely nothing about the main characters, and we don’t have much to latch onto otherwise because we know how this film is gonna sew up. They’ll be fine. Except, not? I nominate Loving for most unnecessary bummer title cards at the end, where we find out that Richard Loving was killed by a drunk driver just seven years after winning their case in the Supreme Court. Mildred Loving never remarried, and said shortly before her death in 2008, “I miss him. He took care of me.” Fuck me running, you’re really gonna leave us with that? After stringing us along for two hours with two ciphers of the civil rights movement that don’t age at all in 10 years and could barely emote beyond shrinking into each other and looking slightly defiant and a bit peeved at all this inconvenience? And the pregnant pause after their lawyer asks Richard what he wants to tell the judges of the Supreme Court, a moment already ruined in the trailer: “Tell them I love my wife.” Anything else? Please!