Best Acting of the Year and Some Lesser Potter

On Manchester by the Sea and Fantastic Beasts and Where to Find Them. 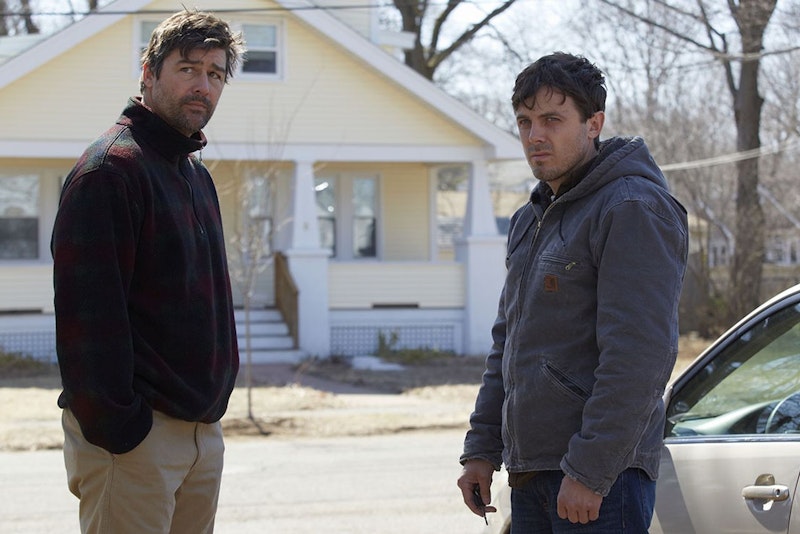 Writer/director Kenneth Lonergan’s last film, Margaret, took six years to reach the screen, such a long time that several of the young actors, including lead Anna Paquin, had aged into adulthood by the time the movie was released. Between that long delay and numerous lawsuits, one couldn’t blame Lonergan for taking it a bit easier with his next film.

Lonergan has in fact done the opposite—and had a much better go of it, with Manchester by the Sea, an emotional powerhouse of a film. It’s a beautifully made, skillfully acted effort, with an astonishing lead performance by Casey Affleck. Manchester by the Sea is set, and was filmed in, the Northeastern Massachusetts coastal town that gives it its title. Affleck stars as Lee Chandler, introduced as a morose janitor at an apartment complex in Quincy, clearly irritable and mostly uninterested in human contact. Soon, he’s called back to Manchester upon the news that his brother (Kyle Chandler) has died, leaving behind an orphaned teenaged son Patrick (Lucas Hedges).

As Lee tries to settle his brother’s estate and bond with his nephew, we get seamless flashbacks to the past, including glimpses of even greater tragedies.

Casey Affleck’s performance is probably the best by any actor in any movie this year. Affleck’s been good before, especially Gone Baby Gone and The Assassination of Jesse James by the Coward Robert Ford. But he hits so many notes here that I honestly didn’t know he had a performance like this in him. One scene in particular between Affleck and Michelle Williams, as his ex-wife, is especially brilliantly acted, and absolutely heartbreaking.

I appreciated that this film shows us a man who is broken, has every reason to be broken, and it doesn’t easily cure him. A lesser movie would’ve shown us the same situation, with the protagonist totally cured either by a romantic relationship or by the work of a really good shrink. (In fact, Will Hunting himself, Matt Damon, was originally set for Affleck’s role.)

The supporting cast goes deep too, led by Hedges, who plays the newly fatherless child in a way entirely different from every other way this sort of part has ever been played. Kyle Chandler, in the Friday Night Lights tradition, plays a character who’s the embodiment of fatherly goodness and human decency. And Kara Hayward, best known as the female lead in Moonrise Kingdom, plays one of Patrick’s two girlfriends.

The other great thing about Manchester by the Sea is just how well it builds the world of its town. The town feels lived in, and Lonergan conveys the feeling of winter in Massachusetts much the same way the Coens did for winter in Minnesota in Fargo. Yes, it’s a town full of loud people with New England accents, but doesn’t spiral into clichés. The scenes set on the Massachusetts Bay, especially the ones involving the Chandler characters, are especially affecting. But despite how sad it gets, the film also offers a surprising amount of humor. Manchester by the Sea is sad, and can be hard to sit through, especially considering the 135-minute running time. But it’s worth it, for one of the most emotionally powerful films of the year.

Fantastic Beasts and Where to Find Them, a spinoff/prequel to the Harry Potter films that was written by that series' creator J.K. Rowling, is a blatant attempt to draw just a little bit more box office blood from the Harry Potter stone.

The film, the first of a planned series of five, is an all-around failure. The plot is silly, the stakes are indeterminate, the pace is sluggish and none of the creature designs are especially impressive. I didn't give a hoot about any of the characters, whether human or not. Sure, the production design is impressive in parts, and a couple of the actors in supporting parts find a way to pop, but overall it's a ponderous slog.

The film, based on an old Rowling tract that exists as a textbook in the Potter universe, is set in 1920s New York. Eddie Redmayne plays an English wizard who arrives in the U.S. with a small briefcase consisting of numerous, inhuman, CGI creatures. He soon runs afoul of a sort of magical detective (Katherine Waterston), while embarking on adventures with an aspiring baker (Don Fogler), who himself becomes smitten with Waterston's clairvoyant sister (Alison Sodel).

There are numerous other subplots, including a host of magical bureaucrats (led by villain Colin Farrell), an anti-magic child abuser (Samantha Morton), a troubled magical prodigy (Ezra Miller), and a newspaper baron (Jon Voight) trying to get his son elected to office. It's not clear how it all fits together, but I guess explaining that is what the next four movies are for.

Meanwhile, the plot stops dead in its tracks several times for long CGI setpieces involving the catching/chasing of the creatures, although the third-act action blowout, yet another one in which the villain takes the form of a giant blob in the sky, leaves the creatures on the sidelines. But that's not the only ending—three more come after it.

Fantastic Beasts was directed by David Yates, who helmed much of the back half of the Potter series; much as he deftly handled the mythology in making two-and-a-half hour adaptations of halves of thousand-page books, he doesn't have enough to work with here. It's an unimpressive visit to a universe that I couldn't wait to leave.