Black Mirror’s “Men Against Fire” keeps me up at night. 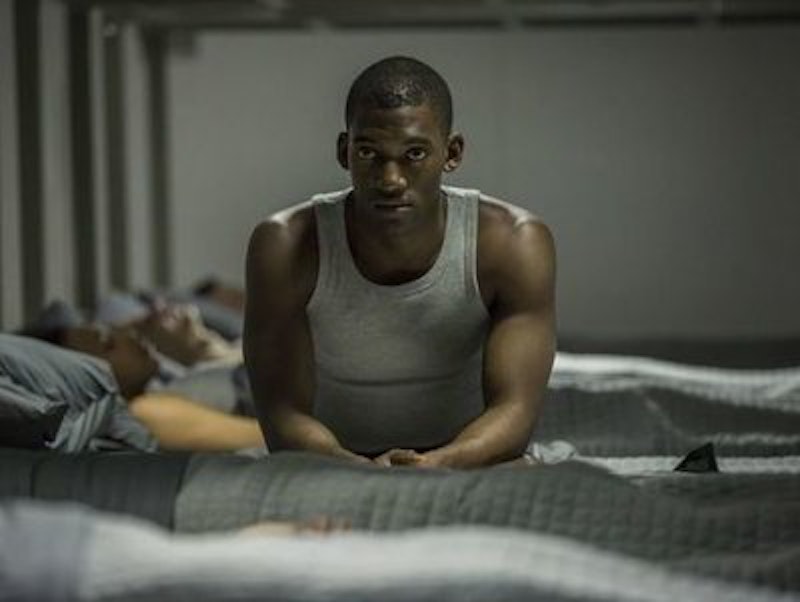 Stripe (Malachi Kirby), a soldier, is deep in the throes of a sex dream a psychologist administered for him hours earlier. A woman appears before him in a bedroom, joined by multiples of herself, but something’s off. The implant glitches; the fantasy’s disrupted. So Stripe awakens, and sits up in his bunk, hunching forward. The camera pulls wide and away, revealing dozens of his fellow soldiers at rest, their fingers reacting almost in unison to some unknown stimuli.

From everything I’ve read and heard, “Man Against Fire” is the least loved Black Mirror Season Three episode. Everyone’s got an objection to lodge, the most common of which boils down to “It was so obvious what was gonna happen.” And the core twist is kinda boring: technology fools soldiers into exterminating of demonic creatures who are actually people. Burrow past that layer and you’re at two core conceits: first, a private army at the tail end of a jacked-up, worldwide eugenics program that echoes the Holocaust, and second, troops engineered into inhumanity.

It’s up-front terrifying, yet it bores other viewers in a way that’s confusing to me, as though the experience of watching a television show ends the second that show ends. Is it me? Is the problem that I simply don’t watch enough television, dipping a toe into two-four short run series per year? Am I not judgmental enough? Because “Men Against Fire,” even framed against a likely future where traditional combat campaigns are less likely than drone warfare, should keep everyone who watches it up nights.

“Fifteen Million Merits,” from Black Mirror’s first season, ended with Bing (Daniel Kaluuya) alone in an apartment more posh than the one he had before. He’s looking outside, at a verdant, vibrant scene. We read the moment symbolically—this is freedom—then the image hiccups just before the cut to credits, and we realize it’s bullshit, that Bing simply catapulted to a larger, nicer cage. “Men Against Fire” concludes in loving emulation of this scene, but it’s much more bittersweet.

Why? Because Bing’s captive to a system beyond our understanding; smart phone/pop star gag reflexes aside, “Fifteen Million Merits” may as well be an analogue to the first half hour or so of The Island for all we know. If you’re a veteran, been close to veterans, or related to veterans, “Men Against Fire” suddenly occupies an altogether different space. The bedrock premise, beneath everything else, is asking “What if you could turn a population into killing machines, and erase as much of their memories as you wanted to, layer an inescapable illusion of unreality over their deployed and civilian lives, and ultimately manipulate them with unimpeachable impunity if you really wanted to?”

Much can be said, not altogether positive, about the United States’ record on veteran care. What if a government didn’t have to care at all? What if all manner of trauma and war crimes could be erased with the click of a button? What if this strange private army were the only game in town? What if you returned home from war with no memory of who you fought or when or why, to a crumbling hovel only you could recognize as anything but?