The Other Side of the Wind is Surprisingly Modern

There’s a tight structure to Welles’ film despite the appearance of freeform dramatic anarchy. 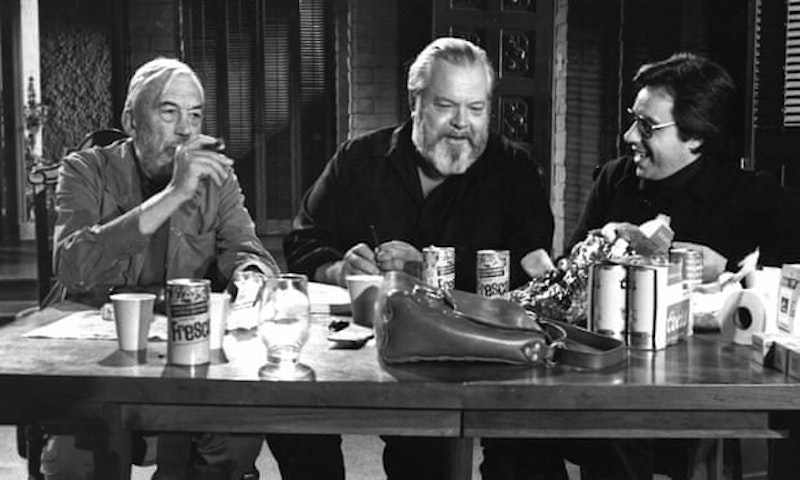 Netflix is doing its damndest to set itself up as the standard for cinematic omnipotence. Its latest move is to resurrect Orson Welles; or, at least, it’s released a new film by Welles, who died 33 years ago. The Other Side of the Wind has been a rumor and a legend to film fans for decades. Welles shot the film from 1970 to 1976, and by the time of his death he’d edited 40 minutes of finished film and left extensive notes for the shape of the rest of the picture. The footage was assembled into a 122-minute film by editor Bob Murawski. It’s streaming on Netflix now, along with a documentary about the making of the film directed by Morgan Neville, They’ll Love Me When I’m Dead.

Chris Beck recently looked at the movie for Splice Today, but a contrasting view might be useful. Let’s begin with a description. The movie’s a fictional documentary about the last day in the life of an old director, Jake Hannaford, played with predatory grinning combativeness by John Huston. It’s Hannaford’s 70th birthday, and in celebration an actress and perhaps former inamorata throws him a party filled with Hollywood people, some of whom are involved in one way or another with his current film—which is titled The Other Side of the Wind, is currently in danger of running out of money, and recently had the leading man walk away from the production. Among the attendees at the party are a number of documentarians and filmmakers, bringing cameras and filming everything that happens. The movie’s supposedly an assemblage of their footage, intercut with scenes from Hannaford’s film.

That film-inside-a-film is a surreal dialogue-free art film, in which a man and woman (Robert Random and Oja Kodar, the latter the co-writer of the film and Welles’s real-life lover) pursue each other across a city and a beach and occasionally have sex; everything that happens has the feel of portentous symbolism, but any actual meaning’s unclear to the viewer. As it plays out, though, in disconnected out-of-order scenes, we come to understand why the mute actor left the film. One way or another, Hannaford’s the center of the drama of The Other Side of the Wind, and the scenes of the party are a grainy contrast to the slick, artful visuals of his movie—gritty real life standing against an idealized cinematic world.

There’s a tight structure to Welles’ film despite the appearance of freeform dramatic anarchy. After an opening voice-over by Hannaford’s protegé, Brooks Otterlake (Peter Bogdanovich), the movie begins with Hannaford calling an end to a day’s filming. He and his guests then go to his party as Hannaford’s old friend, actor Billy Boyle (Norman Foster), tries to explain Hannaford’s film to a producer viewing early scenes with a skeptical eye. That’s effectively the first act, introducing the cast of characters and some of the tensions between them while foreshadowing Hannaford’s death; the second act then takes place at the party, as Hannaford tries to screen his film for his guests, interrupted by projector breakdowns and power failures, and quarrels with friends, lovers and a film critic (Susan Strasberg) not dissimilar to Pauline Kael. The third act shifts the action to a drive-in theater, where the remnants of the party crowd watch the end of the film as the interpersonal drama comes to something resembling a head.

The feel of the movie emphasizes its multi-leveled nature, an assemblage of footage mixing color and black-and-white photography, 8 millimeter and 16 millimeter. At first it feels like chaos, but that’s a well-crafted illusion; watch the movie once and you can be overwhelmed by the handheld verité style, the overlapping conversations and fast edits and mix of acting styles. Watch it a second time and the precision of the dialogue’s a lot clearer. The fineness of the structure becomes more obvious; throwaway lines more clearly form patterns you notice only unconsciously the first time through.

Still, you can’t help but wonder about the mix of reality and fiction. Hence the documentary about the film, playing into this, pointing out different versions of the behind-the-scenes story of the movie. Its title, They’ll Love Me When I’m Dead, may have been something Welles said; or it may not. Its subject is mainly Welles himself, and how he may or may not have worked his own life into The Other Side of the Wind. There’s little in the documentary about how the film was finished after Welles died, or how Murawski’s editing choices were guided by Welles’s notes. It’s about Welles’ own personality, and how it informs the film.

Welles is shown saying that “the greatest things in movies are divine accidents” and describing The Other Side of the Wind is “fishing for accidents.” A lot of the movie, we learn, was improvised under Welles’ careful direction, and that’s allowed elements and themes of Welles’ real life to come through and shape the material. Actors play what they know, and sometimes directors direct what they know, whether they know it or not.

Did Welles see Hannaford as himself? He denied it. Is Huston playing Welles? It doesn’t seem like it. There are resemblances between Hannaford and Welles, but the movie’s a careful dissection of Hannaford’s overblown sense of masculinity, his fusing of sexuality and a need for control. If the movie’s autobiographical it’s a harsh piece of self-criticism. Which it could be, however unconsciously. Still, Hannaford isn’t entirely Welles; he’s more successful, more embedded in Hollywood, a man who came from poverty and got his start as a prop man for adventure serials, not, like Welles, a well-off boy genius who came out of theater and radio.

Ultimately the movie can’t be compressed into mere autobiography. It’s too thematically rich. It’s a movie about movies, and how they’re bound up with life. It’s in the tradition of films that are poison-pen letters to Hollywood, and so its minor characters are creators of dubious talent, a parasitical press, and producers of limited vision. There’s even a reference to HUAC. But there’s much more in this film about death, and love—gay love, too, sublimated and otherwise. Hannaford has a habit of taking away the girlfriends of his leading men, and when he shared a bungalow with his first star actor the two used to strip to the waist every Friday and fight each other for their paychecks. One is encouraged to speculate about what Hannaford lets himself understand about himself.

It’s a movie about masculinity, then, and it plays about with references to Hemingway and takes place on the date of Hemingway’s death. Chris Beck felt the film was out of step with modern feminism; I’d disagree, as I think Welles’ movie takes the macho Hannaford apart. It’s a dissection of what is now called toxic masculinity, and in this way it’s a film that feels very much a part of the contemporary world.

All these themes come rapid-fire, wrapped in unobtrusively stagy dialogue, linking up with each other almost unnoticed. There’s a quickness to the movie, an unobtrusive verbal cleverness that’s camouflaged by the frenetic edits, the constantly-changing visual feel. And then this pace drops away when we see the film-inside-a-film; the distinction between the two narratives generates a kind of energy, grain and lens flare giving way to careful compositions and rich color before taking over again.

The film isn’t perfect. The worst aspects are pure 1970s. Kodar, who’s not an Indigenous American, plays a character who is. “Midget,” now widely considered a derogatory word, is used freely. In cinematic terms, the film occasionally feels conscious of what the 1970s imagined an art film to be. That’s not a problem for the film-inside-the-film, which to some extent is intended as satire anyway; but the rawness of the party scenes sometimes feels too artful.

On the whole, though, The Other Side of the Wind is surprisingly modern. The mention of cell phones and “computerized images” in the opening voice-over spoken by Bogdanovich (obviously slightly re-written from Welles’ original text) doesn’t feel jarring in context. In fact, the last shot of the film gains in irony: it was completed thanks to the use of computers. Overall the film’s collage-like feel works, creating a real sense of symbolic complexity. This is a powerful and important document, and I agree with Beck that, with Citizen Kane, it’s a fine way to bookend Welles’ career.