Netflix Revives Orson Welles’ The Other Side Of The Wind

A bold, if sometimes incomprehensible, film. 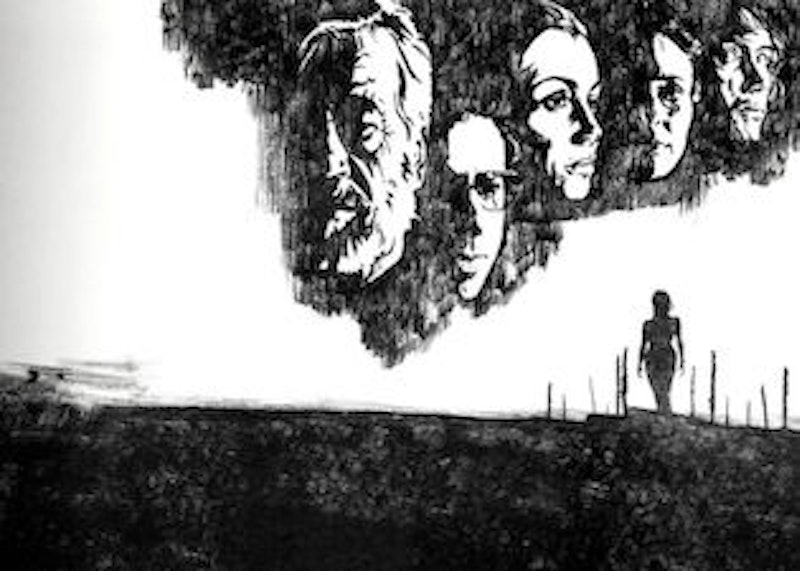 Netflix has helped rescue Orson Welles’ “lost film,” The Other Side Of The Wind, from the legal and financial limbo it was mired in for years, making it available to its viewers. The film’s a jittery, experimental take-down of Hollywood by a creative dynamo who’d been taken down by Hollywood. The director shot it between 1970 and 1976 after returning from a two-decade exile in Europe, originally thinking it would take only about six weeks.

Welles crafted his free-form, sometimes disheveled film in “found-footage” style—events on screen are seen through the camera lenses of various characters involved in the story. The camera does a lot of shaking, with most shots not lasting more than five seconds, making for a vertiginous viewing experience. It doesn’t look like a Welles movie.

Everyone seems to have a camera in the film. Much of the time they’re focused on John Huston’s swashbuckling, Hemingwayesque character, Jake Hannaford, an aging movie director seeking to reignite a fading film career. The film’s a faux documentary of one day—the last day—of Hannaford’s life, centered around a 70th birthday party that a famous actress is throwing for him so a gaggle of New Hollywood movers and shakers can view his “comeback” movie, which has stalled due to financial problems. The incomplete film (a movie within a movie), also titled The Other Side Of The Wind, is a self-consciously arty piece of steamy eroticism tailored for a young, hip audience.

Director and Welles protégé, Peter Bogdanovich, has a major role, playing the unctuous Brooks Otterlake, a commercially successful director who’s writing a book about Hannaford. Welles claimed his film wasn’t autobiographical, but he hired Huston, who resembled him in so many ways, to play the director. Plenty of other Hollywood luminaries make appearances too. Director Henry Jaglom has an extended debate at the party on the nature of filmmaking with fellow director Paul Mazursky. Dennis Hopper says he wants to get John Wayne fans to see his films. Susan Strasberg plays a character based on Welles’ nemesis, Pauline Kael, who wants Hannaford to fess up about his latent homosexuality. There are suggestions in the film that Hannaford is attracted to the leading man in his film, Jim Morrison look-alike Bob Random.

Hannaford’s The Other Side Of The Wind—a mostly silent, hallucinogenic feast with ample nudity, especially from Welles’ real-life inamorata, Oja Kodar—comes off as a send-up of European atmospheric films along the lines of Michelangelo Antonioni’s Zabriskie Point. Welles has been quoted as saying that the Italian director was an “architect of empty boxes.” The film has a fine psychedelic rock score that takes the viewer right back to the 1960s.

The Hannaford role isn’t much of a stretch for Huston, who’s clad in a safari suit, cigar in mouth and drink in hand. He’s playing Orson Welles by throwing in a large dose of his own larger-than-life persona. Hannaford’s from a theater family (as was Huston) with a connection to Shakespeare. He drunkenly expounds to his acolytes on various topics in his rich baritone. Hannaford’s a vice-ridden raconteur with a slew of anecdotes and aphorisms (e.g. ”It’s fine to borrow from others, but what we must never do is borrow from ourselves.”)—a man heading towards a crackup doing his best to present the facade of power he knows is slipping away fast.

Welles used The Other Side Of The Wind, his final artistic statement, to both gut and lionize himself. Surely he was aware of his own genius while also acutely conscious of the personal shortcomings (of temperament, not of talent,) that limited his own artistic output. By contrast, Huston was a realist who knew that a film director doesn’t usually determine when his films are done. But he derived enough pleasure from the sheer adventure he felt in making his films to compensate for the disappointment of knowing he usually couldn’t make them perfect. Welles once said on a TV talk show that he was afraid of dying before he’d produced a work he was proud of. Huston feared dying before he’d squeezed every ounce of excitement and good living he could out of life.

This is not a feminist-friendly, or a #MeToo-friendly film. The director’s “male gaze” is on display from the second scene, when his camera zeroes in on a group of semi-nude women in a steam bath. There’s a suggestion Huston’s character’s dabbling with a girl who doesn’t look more than 12. She’s by his side for nearly the entire party, sometimes with Huston’s hand draped over her shoulder. Hannaford talks about taking to her to Mexico the next day, and she replies, “Gee I don’t know. I have school on Monday.” The leering director replies, “I’ll, uh, write her a note.” That’s not going to happen on a movie set these days. It’s a disturbing element of the film that Bogdanovich has speculated was Welles’ way of lampooning him for once having left his wife and two children after taking up with the young model, Cybill Shepherd, he’d discovered.

The Other Side Of The Wind’s one of those films, like Werner Herzog’s Fitzcaraldo, where the story of how it got made is as notable as the film itself, which is why Netflix simultaneously included Morgan Neville’s documentary of its making, They’ll Love Me When I’m Dead. Watch them back-to-back and it might seem that the two films merge to become one complete piece of work. Its an ambitious, multi-faceted picture—a maverick work by a maverick artist—that mixes comedy, satire, memoir, and tragedy, set to a fine, moody score by Michel Legrand.

Welles was able to edit about a third of his final work before he died. Editor Bob Murawski, with 100 hours of footage to work with, used notes and annotated scripts the director left behind to shape it into Welles’ vision. It’s best not to overthink this film when you watch it, as much of the impact’s visual. You’ll see Huston play a a role nobody could play as well, except perhaps Welles himself. Ironically, he’s doing a takedown of the archetypal he-man, of which he’d long been a prime example.

The Other Side Of The Wind bookends Citizen Kane, made when Welles was 25—a success that the director eventually came to think of as a curse. Many years later, after absorbing blow after blow, the now grizzled director gets one final chance to resuscitate his career with a big bash, but he can’t make it through to the next day alive.