It's the spawn of Neil Gaiman and John Waters I didn't know I wanted. 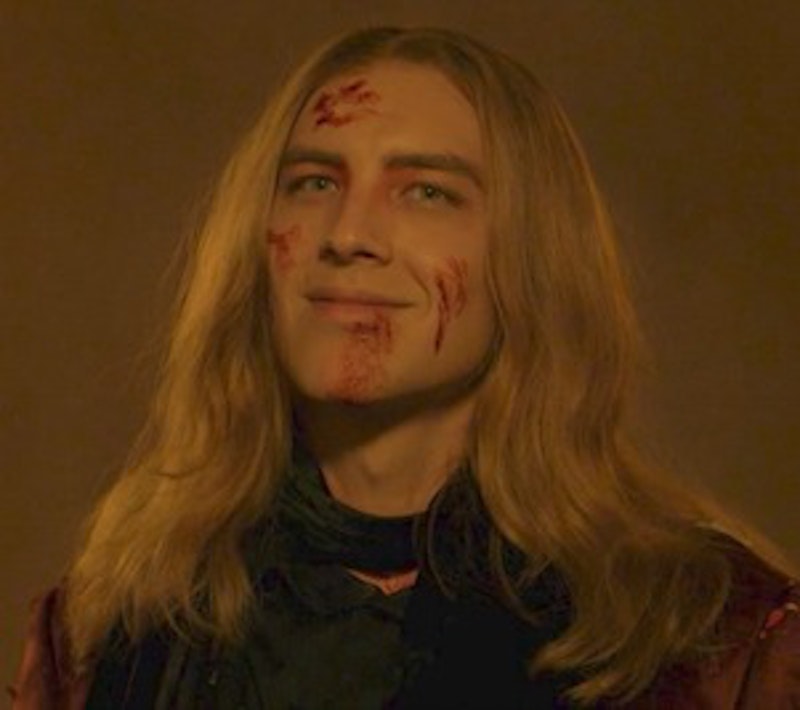 I've never been a big fan of soap operas or fantasy, but the anthology American Horror Story has me hooked. It has a knack for using American mythologies to ponder the human condition and push the storytelling to challenging heights, yet manages to maintain a campy disposition. It's the spawn of Neil Gaiman and John Waters I didn't know I wanted.

American Horror Story's use of myth and history is reminiscent Gaiman's 1980s reboot of The Sandman comic. Drawing on pagan lore, The Sandman created its own mythology by anthropomorphizing metaphysical elements of human existence. In the mid-1990s, the horror anthology, Borderlands expanded the genre's capacity for psychological terror. If I were to see volumes from either series on the bookshelves of the AHS creators, it wouldn’t be surprising.

In the show's format as an anthology, there are new characters and settings each season. While AHS has come to exist in its own universe, with characters from previous seasons either visiting or being referred to in later ones, Apocalypse is the first to give us a continuation story, and the show is better for it. Elements of American history and legends have often been woven into the fabric of the story. Sometimes it's overt, like the sixth season's use of the Roanoke legend, or the seventh season taking inspiration from the 2016 election. But this one excelled because it drew on the show's own history, and in its own subtle way, went deeper into our cultural psyche than ever before.

The season opens with the mad panic of an ending world. To the world at large, this is seen as diplomacy gone completely awry, with all of the world's defenses from itself stripped down to nothing. When the Antichrist character, Michael Langdon, emerges, we're given a small window into the biblical destiny behind it all.

While the rich board their private jets to safety, a secretive group known as "the Cooperative" rescues a few based on their exceptionally interesting DNA. These privileged survivors are thrown together in underground, candle-lit outposts, demoted to living under the thumb of the secret society minions they've entrusted with their protection. It's as though the Stanford Prison Experiment has been reenacted in purple taffeta with some cannibalism ("The stew is Stu!").

The story takes off with the arrival of Murder House's Michael Langdon, last seen at the end of the first season as a homicidal toddler. He arrives in the outpost as an adult, with an all-access clearance from the Cooperative. He promises that some will be chosen to move on to a sanctuary with him, a place more akin to the luxurious lifestyles they left behind. With Timothy and Emily, chosen for their DNA, there are some Adam and Eve parallels. They fall in love, and work to ration their affection due to the ban on fornication. When they find the forbidden fruit of Michael's Apple computer, which somehow has functioning email, they learn the ban is a fabrication, and then consummate their relationship.

As Michael meets with each of the outpost's residences, there's one in particular who isn't what she seems. When he attempts to seduce Mallory, she fights off his advances by pushing him to the floor. The white-faced demon within makes itself known, and, summoning a power she didn't realize she had, aims the fireplace's flames in Michael's direction until the demon retreats. The in-fighting in the rest of the outpost turns into a massacre, until the only ones left alive are Michael and his robot nanny, Miss Mead. This heralds the arrival of the witches from the third season's Coven. The post-apocalyptic action stops abruptly, and the story shifts to the events leading up to the apocalypse.

In trouble with the police, Michael’s discovered by a warlock coven who believe he’s the prophesized Alpha they’ve been waiting for. The warlocks meet with the witches to discuss the possibility of him taking the test of the Seven Wonders. If successful, Michael could displace Cordelia Goode as the ruling Supreme over the covens, and shift the balance of power from the witches to the warlocks. The ensuing battle of the sexes debate plays out like every discussion I've seen on social media regarding women in sports or the military, and Cordelia is epic when she argues that testosterone is a well-known inhibitor of magic. However, when she meets Michael, who arrives with Madison and Queenie, two witches that died in previous seasons, she relents, and allows him to take the test, tricking him into rescuing another witch from Hell.

With her coven fully reunited, Cordelia digs into Michael's background. A skeptical warlock has already been killed by the human Miss Mead, and Behold Chablis, another warlock, shares his concern with Cordelia. She sends him and Madison to Michael's birthplace to investigate. It's clear that Michael isn't a normal mortal warlock, but they can't put their finger on what he is. Visiting his childhood home, the ghosts of Murder House share the story of Michael's life with Madison and Behold. In the flashback sequences, we watch Michael grow from a boy to a man over the course of seven years, because he ages 10 years overnight. His childhood is similar to what we've seen with so many serial killers, killing small animals, then larger ones before moving onto humans. He’s cast out by every member of his family, in a fable similar to Lucifer being cast out of heaven. Michael begins to embrace his dark side, and after Anton LaVey shows up on his doorstep with Miss Mead, he begins to learn to embrace his destiny as the Antichrist.

Despite Cordelia's destruction of Michael's allies, including Miss Mead and some warlocks, he finds new disciples. His sojourn through the forest, communicating with his father, is an inversion of Christ's agony in the garden of Gethsemane. He wanders into a satanic temple that expedites his path to the apocalypse. A parishioner explains how selling her soul to Satan has given her the life she wants—cute Mission-style house, Wednesdays with Brad Pitt, and Ryan Reynolds on Friday. She introduces Michael to a pair of coked-up, billionaire AI engineers, who’ve also sold their souls for personal enrichment and Ryan Reynolds on Thursdays, and reconstruct Miss Mean into an android.

What makes Cody Fern's performance so compelling is that even though we’re looking at an adult, there are moments where Michael is still very much a child. As a result, he's malleable to unscrupulous people. It's obvious that the Antichrist is supposed to be dangerous, but his immaturity, pettiness, and ignorance are what make him a danger to the world. In the lead-up to the apocalypse, he's manipulated into pursuing nuclear Armageddon by the AI engineers. Michael’s more focused on revenge against Cordelia and her coven. In a scene reminiscent of the Gaiman short story, "We Can Get Them for You Wholesale," where a dejected man looking to kill his wife lets a hitman talk him into a bulk rate cataclysm, the engineers assure Michael that destroying all of humanity would also take care of his witch problem.

He’s then introduced to the powerful people who make up the Cooperative (Warren Buffett, Vladimir Putin, and Bill Clinton, but not Hillary) to put humanity’s end in motion. He also learns that the Illuminati is real, and every horrible thing about them is true, which is why they’re in league with Satan, but changed their name to the Cooperative for marketing purposes.

Michael Langdon's life comes to an end when Mallory travels back in time to kill him, preventing the apocalypse altogether. At a point in his life where he's especially despondent, having been cast out by his grandmother, but not yet cognizant of his identity as the Antichrist, Mallory repeatedly runs over Michael with a Range Rover. Staying in the new timeline, Mallory returns to the witch academy, enjoying a new life of peace with her sisters.

Of course, peace isn't forever. In the new timeline, Timothy and Emily still manage to find each other, fall in love, and have a baby. After a night on their own, the young couple returns home to find it strewn with blood, their toddler in his rocking chair, with the babysitter dead on the floor before him—just like young Michael. The scene is a call back to when Michael committed the same crime at the same age, and is found by his grandmother in the rocking chair. The magic of their DNA is they were the Cooperative's backup plan for producing an Antichrist. Evil may have been defeated this time, but it shall return to fight another day.