Cam doesn't know quite who it is. 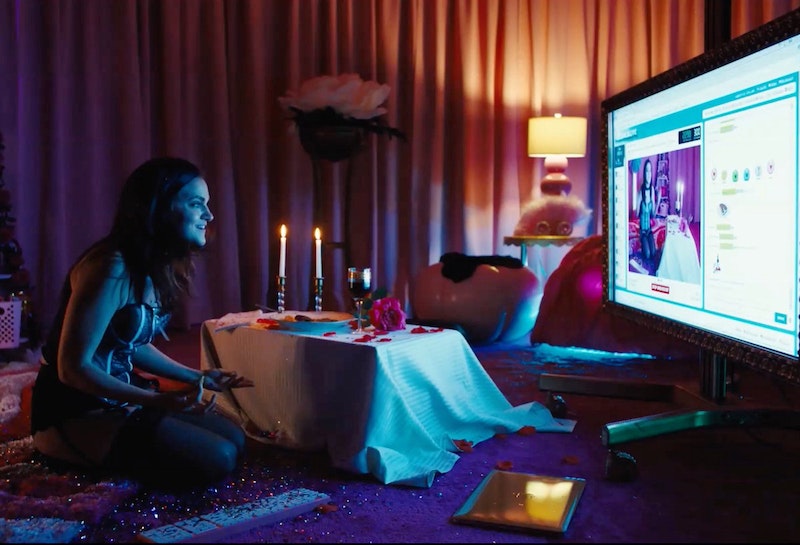 This is part of a series on Blumhouse horror films. The last entry on Get Out is here.

Sexploitation films warn sternly of collapsing morals while gaping at the naughtiness revealed when those morals are teasingly tossed aside. It's an unpleasant but sturdy formula, and one that's roped in voyeuristic audiences to watch everything from Anita the Swedish Nymphet (1973) to the recent documentary about cam girls, Hot Girls Wanted (2015).

Franklin was widely respected and validated for his business acumen. Cam girls aren't treated so kindly. Alice is afraid to tell her mother about her job for fear of disapproval. Her brother's friends mock her when they find out she's doing porn. Police don't help Alice; instead they ignore her and sexually harass her. And even her clients are unpleasant and at times outright dangerous. When she meets up with one for a professional date (which is explicitly not meant to include sex) he tries to rape her. Alice is creative, dedicated, and driven, all traits our society is supposed to value. But because sex work is stigmatized, she's considered shameful, and fair game for violence, mockery, and exploitation.

The anger at Alice's treatment, and the insistence that there’s nothing shameful in what she does, is the emotional and moral core of the film. But that core is off to the side of the main conflict, which isn't about Alice vs. the world, but about Alice vs. herself.

One day, Alice tries to log into her cam account, and finds that someone has stolen her identity. A woman who looks exactly like her begins to perform cam shows as Lola while Alice watches helplessly.

In a traditional sexploitation film, Alice's nightmare would be presented as just desserts. By profiting from her sexuality, such a story might go, Alice has alienated herself from her body and soul, and so she’s severed from both. Losing her self is the natural consequence of losing herself. The only solution in such a narrative would be for Alice to return to the path of virtue, quitting the cam life and settling down with a nice boy.

That's adamantly not the message the movie wants to leave you with. The identity theft, in the film, is not Alice's fault. That leaves the mystery of whose fault it is—and there the film flails. After investigation, Alice determines that the fake Lola is a computer program rather than a person, but how the program is put in place, how it works, or who’s behind it is never explained.

The banishment of fake Lola is a banishment of the sexploitation genre itself. Alice's ordeal doesn't put her on a supposedly "better" path. She just picks herself up and starts another cam account, this time (in a touching scene) with her mom's behind the scenes help.

But that relatively positive, non-judgmental ending raises the question of why we were mucking around with sexploitation tropes to begin with. Fake Lola is a ghost haunting Alice for a crime she didn't commit, cursing her with guilt she doesn't feel. Alice never learns who Lola is, or what she meant to her, just as Cam never figures out how to be both sexploitation and something else entirely.