Land of the Lost

Streetwise follows homeless youth in 1983 Seattle: proto-Kids, but closer in spirit to Frederick Wiseman. A 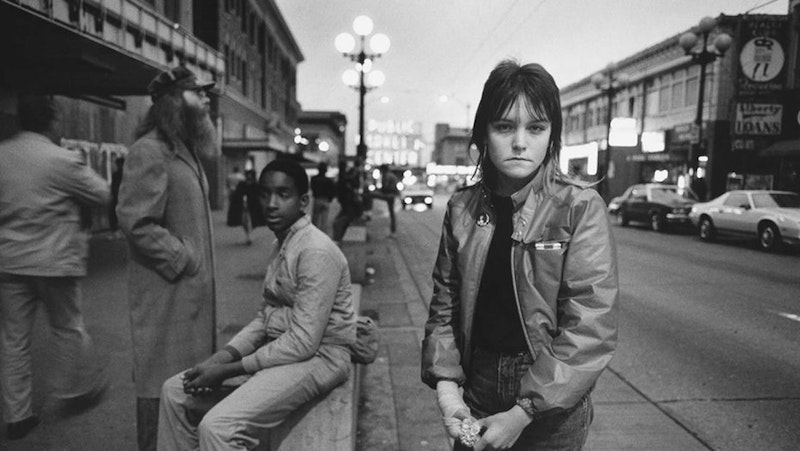 Rarely does a documentary escape formal pitfalls and succeed where so many others are embarrassing. Streetwise, from 1984, follows about a dozen teenagers and young adults who live on the streets. Some are prostitutes, some are drug addicts, more still are dumpster diving and begging for change just to survive. Martin Bell directed and photographed Streetwise, inspired by a LIFE magazine article by Cheryl McCall called “Streets of the Lost,” and shot for roughly two months in the fall of 1983 with his wife, photographer Mary Ellen Mark. On the surface, Streetwise presages Larry Clark and Harmony Korine’s Kids by over a decade, but it’s closer in spirit and form to the documentaries of Frederick Wiseman, who’s been exploring American institutions without condescension or exaggeration since Titicut Follies in 1967 (followed by decades of films with far more spartan titles: Hospital, High School, Juvenile Court, Basic Training, Law and Order, Missile, Domestic Violence, State Legislature; all the way to last year’s Monrovia, Indiana).

Like Wiseman at his best, the filmmakers behind Streetwise gained the trust of their subjects and never betray it. In an era of Reaganomics, the PMRC, Live Aid, and Hands Across America, it’s easy to imagine how these kids would’ve been exploited by a less sympathetic crew. You know D.A.R.E. would’ve been all over this, and in an election year, Mondale or Reagan could’ve spun the footage here of pregnant teenage prostitutes and strung out dropouts whichever way they wanted. Streetwise is extremely combustible, a film as bracing as it is generous and patient. It doesn’t have the patronizing Jane Goodall air of a sophisticated human crew bending down to comb for lice in the hair of serfs. Bell and Mark spent enough time with these kids to know that there was little else they could do to help them than share their lives to the rest of the world as plainly as possible. One of the subjects, “Lulu” Couch, was stabbed to death at an arcade just two years later: reportedly, her final words were “Tell Martin and Mary Allen ‘Lulu died.’” This is a tough fucking kid, maybe the most antagonistic in the film, and to gain her trust, much less her affection, would’ve been impossible for most other documentary crews.

I’ve heard stories about vulture producers and showrunners coming to Baltimore and openly praying for a shooting, a stabbing, a robbery, “something exciting” to happen. Documentary photography is famously fraught and ethically ambiguous. Motion pictures are inherently more accessible and human, viewable outside of a museum context. In a 2016 interview, Bell said, “I’m there showing you that there’s something seriously wrong here. Of course I was angry and concerned when someone we knew was at risk, and some of them did die. Roberta Hayes died at the hands of Gary Ridgeway [the Green River Killer]. At the end of Tiny, you see Mary Ellen getting a ticket from a cop for jaywalking. Directly behind her, kids are getting into cars with johns. They’re underage. Where is the concern there? It seems to be accepted.”

Erin “Tiny” Blackwell is one of the primary subjects, a 14-year-old turning tricks and shown multiple times getting into cars with very old johns. She lives with her mother, an alcoholic waitress barely able to get by (but even with a minimum wage job, this woman was able to rent a home in the city, which would be impossible today). Tiny’s mom was suspicious of her daughter’s prostitution, but won over by how much money she makes ("Erin brought home $200 one night!”), and she’s convinced this is “just a phase.”

Shortly before we see Tiny hug her mother goodbye as she goes off to an inpatient rehab, we watch Streetwise’s other protagonist, Dewayne Pomeroy, visit his felon father in jail. They both give each other pep talks about staying clean and out of trouble. By the end of the movie, Dewayne is dead: he hanged himself in a juvenile detention cell. We see his “lonely” funeral with few guests: his weeping father and the prison guards escorting him, his social worker, and a couple of friends. But otherwise, no one. It’s an open casket funeral, and we see Dewayne’s dead body in its coffin and his father caressing his face. Streetwise ends with a long shot of a boat on Puget Sound, Dewayne’s few loved ones scattering his ashes.

What’s amazing is that none of this ever feels sensationalistic or saccharine. Streetwise is superbly photographed by Bell and the editing (by Nancy Baker and Jonathan Oppenheim) is particularly great. It moves and has a lyricism and expressive, poetic flights that recall the documentaries of Jean-Pierre Gorin (My Crasy Life) and the fantasy climaxes of so many Spike Lee films. Not even a typical Wiseman gets as expressive as stretches of Streetwise, but his concentration and generosity of spirit are abundant here, too. Unfortunately, every problem depicted in the film has only gotten worse. People like Tiny’s mom don’t live in houses now; they live in tents. Its examination of underage prostitution, drug use, petty crime, squatting, and wealth inequality isn’t prescient, it’s contemporary. Streetwise’s uncompromising view never veers into the sentimental or didactic, and nothing addressed in the film has gotten better. If Seattle was America’s “most livable city” in 1983, what do the most abject shanty towns look like today?

Streetwise is currently touring revival and repertory programs with a Janus Films logo, so there will likely be a physical release by the Criterion Collection in a few months. You can see it one more time in Baltimore at The Charles on Thursday September 12 at nine p.m., and via a PAL formatted VHS copy at Beyond Video.