Angel Out of Time

Angel Has Fallen, like Top Gun, is a male bonding movie where hundreds of people die. C+ 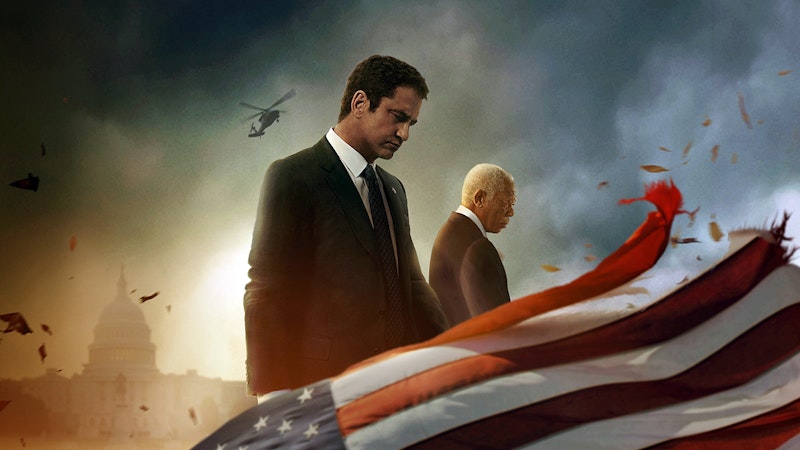 Picking apart Angel Has Fallen, the third in a trilogy of “Fallen” films (first it was the White House—“Olympus”—and last time was London), is joyless. The dialogue (what little there is) sucks. So what? The physics are ridiculous and the invincibility of series hero Mike Banning (Gerard Butler) is never explained. So what? His abilities need no explanation: do we ask the same of Batman, Superman, Spider-Man, or anyone in the Marvel Cinematic Universe? No, because their powers are their identities. Banning's powers aren't explicitly stated, but Angel Has Fallen assumes that its audience agrees that American Secret Service agents are superheroes.

Angel Has Fallen is a film out of time starring a particular type of leading man that doesn’t really have a place in American multiplexes anymore. Jingoistic action movies like this used to ride solely on their star, whether it was Arnold Schwarzenegger, Jean-Claude Van Damme or Steven Seagal, but this is no longer a safe bet: why bother with a popcorn action movie if it isn’t branded or “world building”? Ironically, movies like Angel Has Fallen do more convincing “world building” than Marvel will ever manage, because it merely follows more than a century of American propaganda in the cinema, from Griffith to Ford to Siegel to Bay. These are the people who made the movies everyone was thinking of on 9/11. “It looks just like a movie”—which one? Well, Roland Emmerich’s Independence Day, without which there would be no “Fallen” series.

Butler stars as Banning, Captain America without the colors, an American superhero. Butler’s a fine action actor, but he’s not a star. He’s just dull, a mannequin in tactical gear. He’s functional but he has no personality. He’s not an interesting actor, but he’s not bad, and that sort of anonymous mediocrity is perfect for this American era: vague. We fight but for what? Eighteen years in Afghanistan really show in Angel Has Fallen. So many people die, hundreds, either trying to kill or save the President, played by Morgan Freeman. It’s too silly to be propaganda, and it has nothing going on aesthetically. This isn’t James Bond or John Wick. The filmmakers take it for granted that their audience agrees with American foreign policy sight unseen. Angel Has Fallen doesn’t question the absurdity of such a powerful and destructive military apparatus, or expect anyone to bat an eye when the devious Vice President intones with zero irony: “Fighting for money isn’t the same as fighting for your flag.” Where does American exceptionalism end and propaganda begin?

If Angel Has Fallen has any emotional center—the wife and baby are incidental—it’s Banning and Wade Jennings (Danny Huston). The two men talk early in the film, before the betrayal, and Mike and Wade (everyone calls them by their first names) have a good talk after dinner. “You couldn’t survive a desk job.” Echoes of Heat: “I do it for the juice.” No, neither of them could: so they foil plots. They mount operations. They stay up all night, hack, shoot, drive, scowl, repeat over and over for two hours. This is recreation; this is their free time. Angel Has Fallen is a male bonding movie for insecure masculine men who can’t confront their emotions directly. They have to work around them to find a “less gay” way of saying “I love you.”

When Banning finally has Jennings in his sight, he drops his machine gun, and the men have a good ole fashioned duel, which devolves into a knife fight. Banning finally sticks it into Jennings, in a strikingly sensual murder scene that immediately recalled the ending of last year’s Burning. Just as Jennings shook his head an hour earlier after Banning had escaped yet again: “That’s my Mike.” These men have one more moment on bonding as Jennings bleeds out, and resolving this “friendship” is one of the movie’s top priorities, bizarrely. Is there honor among thieves and contract killers that pledge allegiance to no flag other than the dollar? Angel Has Fallen also betrays how out of touch it is with all of the Russia stuff. The Vice President was trying to do Morgan Freeman dirty (this is never allowed), and his scheme connects Banning to $10 million in an offshore account linked to the Kremlin. Russia, of course, had nothing to do with it—but this wormboy was all ready to go to war and bomb Russia for nothing. Figuring out the politics of this movie brings on migraines much worse than the ones that plague Mike Banning. Is the colluding Vice President a Trump stand-in? After all, he does look a bit like Steve Mnuchin.

The crypto-fascist bent of Angel Has Fallen doesn’t disturb like Zero Dark Thirty because it’s not realistic. But obviously the movie isn’t apolitical, and its ideology is as vague and empty as you’d expect in an American era where our cause and drive are unclear beyond maintaining supremacy. We can’t unite in a war against the Axis. We can’t even fight over the endless wars in the Middle East because we have no draft. Vietnam was not out of sight, out of mind like Iraq and Afghanistan are. Why are we celebrating these super soldiers of the state? Why are they heroes? Can there ever be such a thing as a “war hero”? To expect Angel Has Fallen to ask, much less answer, these questions would be foolish, but it’s not a waste of time. This movie is ripe for analysis and feels dropped out of a time capsule from 20 or 30 years ago. These movies are American myth machines, the myth we learned growing up that has seriously eroded in the past decade. In the era of nonlinear warfare, a superhero like Mike Banning feels woefully unequipped to fix anything.