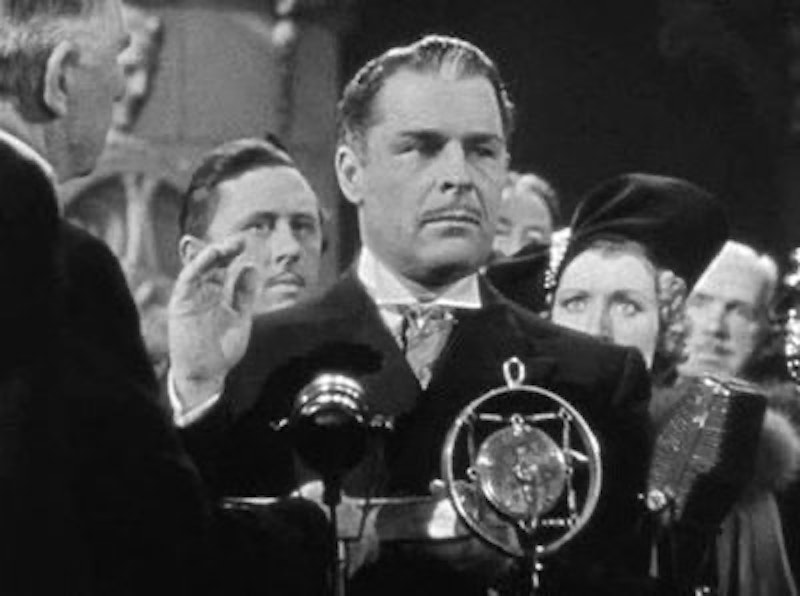 This is the second in a series of 12 posts on political films. The first post on Mr. Smith Goes to Washington is here.

Democracy, feh. That would be a good two-word summary of Preston Sturges' attitude in The Great McGinty (1940). Frank Capra's Mr. Smith Goes to Washington (1939) is full of fulsome paeans to America, complete with Lincoln memorial money shots and a grandiose celebration of procedural Senatorial delaying tactics as a crucible of virtue. Sturges, in contrast, sees nothing particularly ennobling or inspiring in politics, which he presents as a thoroughly corrupt boondoggle. The film begins with our hero, the tramp Dan McGinty (Brian Donlevy), voting 37 times to earn $2 a pop from the political machine. The machine sees McGinty's mega-voting as a testimony to his get-up-and-go, and it paves the way for his political ascent. "If it weren't for graft," declares William Demarest as The Politician, "you'd get a very low type of people in politics."

So, Capra is a starry-eyed dreamer; Sturges is an open-eyed realist. And yet, their films are oddly congruent in one respect. They are both political films that star politicians utterly lacking in political ambition. Jeff Smith (Jimmy Stewart) in Capra's film is a boy's camp leader who’s chosen to replace a deceased Senator out of the blue; he has no political experience, political ambition, or political program. Similarly, The Boss (Akim Tamiroff) decides to turn McGinty into a collections enforcer, and then an alderman, a mayor, and a governor. McGinty just wants a job; he goes where he's pointed.

In real life, you don't become a national-level politician without trying any more than you stumble into being a ninja assassin. And yet, Hollywood loves films in which some random innocent suddenly discovers he's a ninja assassin. From The Bourne Identity to The Long Kiss Goodnight to American Ultra, everyday schnooks wake up one morning to discover that they improbably have the skills to kill someone with their bare hands and a water bottle. All across the land, amnesiac assassins slumber, waiting for the right trigger to reveal their prowess.

The non-politician politician trope creates a parallel between the non-politician viewer and the Smiths and McGintys who were lifted out of their humdrum existence. The fact that these innocent politicians lack any political background makes them more like the audience, and easier to identify with. Politicians, like ninja assassins, can be anyone.

If a politician/ninja-assassin can be anyone, that means that the ninja-assassin/politician requires no specialized knowledge or training. In amnesiac assassin movies, this is finessed through the miracle of the subconscious and muscle memory. In non-politician political films, though, the assumption is that politicians truly need neither skill nor knowledge. McGinty has to marry in order to run for Mayor, because women have the vote and (supposedly) women don't like bachelors. But McGinty doesn't need to know anything about issues, or how to present himself in public. The film emphatically insists that McGinty is a pugnacious tough-guy, who says what he thinks, takes offense at mild slights, and speaks before he thinks—and that's when he isn't drunk. Yet, we're supposed to believe that none of that matters in his political career. Will he slug an important donor? Will he say something shockingly sexist and alienate those women, even if he is married? Impossible; the boss of the machine chooses him, and as soon as his secretary Catherine (Muriel Angelus) agrees to wed him, he's on his way.

If you're telling a story about a non-politician, then the plot must involve non-political choices. That's the case for Jeff Smith, and for McGinty, too. Politics is presented in these films entirely in terms of corruption. Bad politicians engage in public works in order to give kickback contracts to the machine. Reform politicians claim to eschew bribery—though they’re really just on the take more quietly, in Sturges' view. Capra thinks good triumphs; Sturges thinks corruption does. But they're in agreement that good vs. corruption is the only substantive questions politicians face. Bernie Sanders must’ve watched these films on rotation when he was a kid.

In Capra's film, that's that; Mr. Smith Goes to Washington aspires to avoid all moral gray areas, and it succeeds. The Great McGinty, though, allows a little more room for ambivalence. The public make-work programs that the machine advocates are, it turns out, popular with the public in part because they generate jobs. When you're in the middle of a Great Depression, counter-cyclical spending is maybe a good idea—though obviously it would be better to spend on needed infrastructure improvements rather than corrupt swindles.

The reform programs that McGinty's wife Catherine advocates have some downsides too. McGinty insists that when he was a kid, he liked working in the factories. His description of clean, safe work environments for 10-year-olds seems pretty far-fetched. But he's circling around the point that he needed the money. Child labor is a result of poverty; if you make the labor illegal, but don't put in provisions for dealing with the poverty, you'll just have children dying of starvation rather than from workplace injury. Do-gooder efforts based on half-baked analysis can end by tossing people out on the street in the name of slum clearance. If you want to help people, it's important to take a minute to figure out what it is you're doing.

But who wants to get bogged down in a lengthy discussion of government's role in the economy and the mechanics of targeted anti-poverty programming? Not Sturges. In the end, McGinty takes a stand against job-creating corruption, and the machine destroys his political career. He's forced to run for the border with the Boss, leaving his wife and adopted children behind.

The AV Club argues that the film demonstrated "a genuinely jaundiced view of the electoral system"—but I don't think so. Sturges is taken with his political rapscallions. McGinty's relationship with Catherine is never very convincing; his fisticuffs with the Boss, though, have the vim of real affection. Political corruption is manly and fun. Who can be put out by a system that produces such endearingly amoral characters?

Beyond that, Sturges' decision to sideline ideology makes it impossible for The Great McGinty to grapple with either the best or the worst of politics. Jim Crow and the invasion of Iraq, to name two moral disasters, weren't the result of bribery. No one paid George W. Bush to convince him that war should be a first resort.