The Ghostbusters Controversy Is Absurd

A talented cast makes for a fine remake. 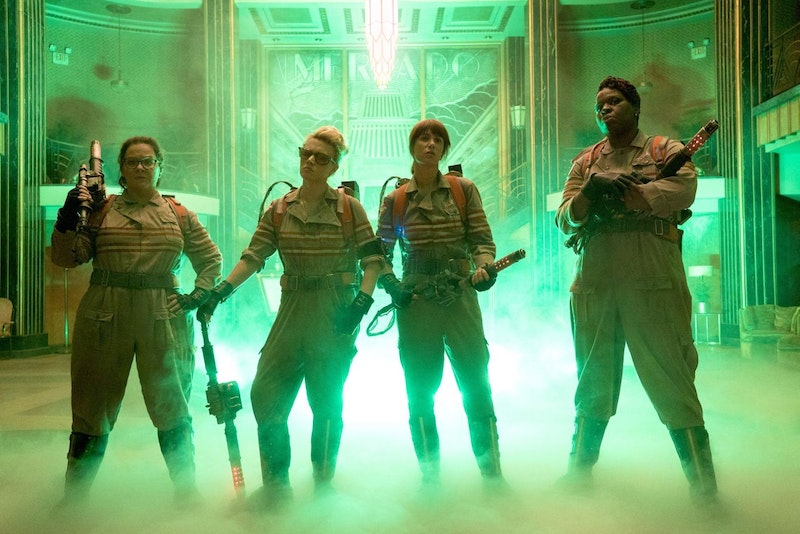 As with most culture war skirmishes of the past several years, the little boys of all ages are wrong about the new Ghostbusters. It isn’t “sacrilege.” It doesn’t “ruin” the original or your childhood. There’s nothing wrong whatsoever with rebooting Ghostbusters with four women. And the lackluster trailers haven’t led to a lackluster movie. The lesson? As always, don’t pre-judge a movie before you’ve seen it.

Ghostbusters, as every other film, should be judged on cinematic rather than ideological grounds, so let’s do that. The new film is outstanding. Director Paul Feig has delivered once again, making a funny, witty and exciting movie that pays just the right amount of tribute to the franchise’s legacy. No, it doesn’t quite transcend the original film the way that, say, Creed transcended Rocky. But it’s good—and more notably, it’s good in its own way.

Coming from Feig, the director of Bridesmaids, the new Ghostbusters is a bit more of a pure comedy than its predecessor. The setup is that Kristen Wiig’s character is a respected professor at Columbia, who wrote a book years earlier arguing for the existence of ghosts along with her childhood best friend (Melissa McCarthy).

When a ghost resurfaces in New York, the friends reunite, along with McCarthy’s assistant (Kate McKinnon) and an MTA employee (Leslie Jones), to form a familiar-looking Ghostbusters agency. Chris Hemsworth is on board as their dimwitted receptionist, while there are lots of cameos, from the likes of Ed Begley, Jr., Zach Woods and just about the entire living original cast.

In a cast full of Saturday Night Live alums, the breakout is Kate McKinnon. She’s been the MVP of SNL for several years now and here, in her first big movie role, she stands out in just about every scene. I’m hoping this leads to a whole bunch of leading roles for her in the near future. Jones is something of an acquired taste, but her energy is just right for the material.

McCarthy and Wiig, meanwhile, have the same winning chemistry that was one of the better parts of Feig’s Bridesmaids. The script, credited to Feig along with Katie Dippold, gives all of them plenty to do. Do all of the jokes land? No, not quite, the Bill Murray cameo is especially lackluster, and a running gag involving Chinese soup orders doesn’t get any funnier the longer it goes on. But the film sets a sustained tone of comedy at the start and keeps it up for the entire nearly two-hour running time.

The big surprise, though, is just how well the effects are handled. Feig, while an accomplished director of comedies, has never directed anything of this scale, or with this amount of action of special effects. But this aspect of the film is presented impeccably. And while it can’t beat the legendary third act of the original film, the final battle is outstanding, including the brilliant touch of the ghosts turning Times Square back into its 1950s incarnation.

Is the new Ghostbusters better than the original? No. But it more than justifies its existence.

So what’s the ultimate lesson of Ghostbusters’ unlikely status as The Most Controversial Film of 2016? It’s that our culture pays more attention to the whines of stilted man-children than it should. If Ghostbusters meant a lot to you as a child, you’re probably almost 40. And if you’re almost 40, you’re too old to care that much about the movies you liked when you were a kid—or, for that matter, spend considerable time on IMDB down-voting a film you haven’t seen.