On Mike and Dave Need Wedding Dates, The Secret Life of Pets, and Zero Days. 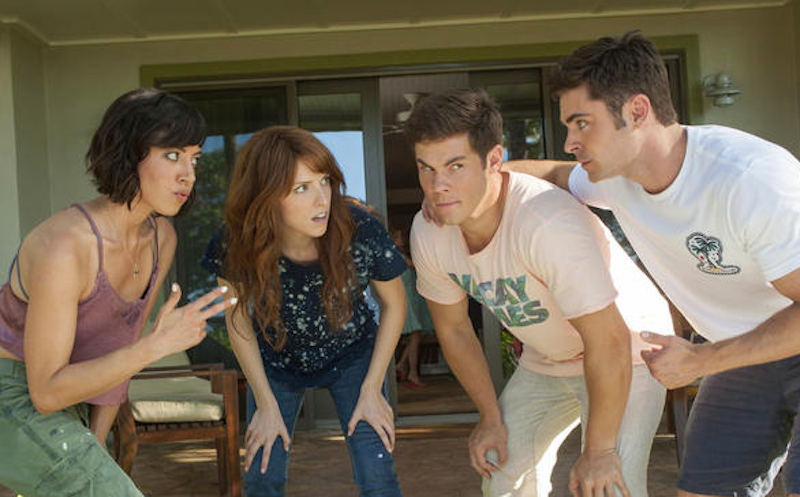 Mike and Dave Need Wedding Dates is every bit the stupid, raunchy high-concept comedy that appears in all of its marketing. The concept is silly. The general vibe is gross and misogynistic. It’s a third-rate knockoff that steals the best parts of Wedding Crashers and Meet the Parents. But within that framework, there are some hilarious gags and a couple of very funny performances.

Based loosely on a “true story,” written by a duo of sub-Tucker Max frat bro memoirists, Mike and Dave is a sort of inverse of the plot of Wedding Crashers. A pair of dim-witted bros who are actually brothers (Zac Efron and Adam Devine) have a well-earned reputation for drunken antics at family gatherings. With their sister’s wedding approaching, their dad (Stephen Root) demands they solve the problem by finding nice, sweet girls to bring as their dates.

A viral Internet/talk show campaign takes place and a pair of women (Aubrey Plaza and Anna Kendrick) win the dates, even though they’re feigning respectability and are actually drunken disasters. And because the two men are blithering idiots, they fall for the obvious ruse for an extended period of time.

The four main actors are all talented—even Efron—and they do reasonably well with less-than-stellar material. But the conceit is stupid and makes little sense—these “bad girls” don’t do anything worse than the typical actions of the two male heroes. Plaza’s an alcoholic, and the Kendrick character—a woman recently left at the altar by her fiancée—is more a sympathetic, wounded figure than the disaster she’s portrayed as.

So what keeps the movie from total awfulness? There’s a lot of very funny stuff going on at the margins. And at the start of that is a dynamite fifth-banana performance by mostly unknown actress Sugar Lyn Beard, as the bride and sister of the two male leads. She plays four different modes, all of them funny and believable.

There’s also a scene-stealing performance from Alice Wetterland as a lesbian cousin of the boys who sets out to steal their dates from them. And Sam Richardson, as the groom, gets a great moment that’s nothing like his hilarious performance on Veep. Efron, while somewhat limited as an actor, has carved out a niche in this sort of bro-ish comedy, especially the Neighbors movies, while Devine doesn’t move much beyond his usual persona from Workaholics (although now that he’s approaching his mid-30s, perhaps he should start.)

As for the female leads, it’s far from the best performance of either of their careers, and after January’s Dirty Grandpa, it’s worrying that the talented Plaza is defaulting to “dim-witted sexpot” in each of her movie roles. Kendrick, meanwhile, is much better as something of a 21st-century Miss Havisham, who continually watches the cell phone footage of herself being left at the alter.

I can't recommend Mike and Dave Need Wedding Dates, but watch the bride. She's the best part of the movie.

The Secret Life of Pets may be a production of Universal/Illumination, but it’s structured exactly like a Pixar film, especially Toy Story: There are animals/things who can talk to each other, as long as they’re out of the earshot of humans, and the bulk of the film is taken up with them taking turns rescuing one another. It’s not quite on the Pixar level, but Secret Life is highly entertaining.

The film can’t escape the Illumination predecessors Minions—it features both a short starring the little yellow irritants and a character dressed as one of them—but it’s a big improvement over the Minions’ own movie from last summer. For one thing, the characters can actually speak words.

Directed by Minions co-creator Chris Renaud, The Secret Life of Pets centers on Max (voiced by Louis C.K.) who lives in a New York apartment with his owner (Ellie Kemper) and engages in various adventures along with the neighboring animals when all of their owners are away for the day. When his owner adopts a second, bigger dog (Eric Stonestreet), their feud leads to a day-long chase around the city.

Aside from the masterstroke of having Louis C.K. voice a cartoon dog, the best thing about the film is the way it animates New York, from apartment buildings to the subway to the East River. It’s gorgeous, and helped along by a very good score from Alexandre Desplat.

The movie’s other best idea is a tiny, cute-looking bunny (voiced by Kevin Hart) who’s actually a militant revolutionary, leading a group of sewer-bound ex-pets seeking revenge after abandonment by their human owners. Forget Minions; I'd watch a whole spinoff about the Huey Newton bunny.

Things get a bit ridiculous in the latter stretches—after Finding Dory, it’s the second animated movie in three weeks in which small animals hijack a truck. But overall, in a very strong year for animated releases, The Secret Life of Pets is among the best.

Zero Days, the latest documentary by the prolific Alex Gibney, goes in depth into a subject most Americans probably know little about: The Stuxnet worm. It was a cybersecurity effort, jointly developed and deployed by the U.S. and Israel in the later Bush and early Obama administrations in order to sabotage the Iranian nuclear program. It succeeded, at least in part, but later leaked out elsewhere in the world, raising troubling questions about the future of cybersecurity.

The new film, featuring an array of talking heads, has most of the strengths and weaknesses present throughout Gibney’s work. It’s a well-told version of a fascinating subject. You'll come out knowing more about the topic than you did going in. But, there’s the same spooky, ominous music from start to finish.

The film’s key device is an actress who’s a composite of several whistleblowers, and she’s portrayed as something resembling a hologram, complete with “code” coming out of her hair. Gibney has tried this trick before—he had an actress play the primary prostitute in his Eliot Spitzer doc Client 9—but it looks even goofier here.

When it comes to documentaries about cybersecurity and the 21st century deep state, there are several good ones, especially Laura Poitras' Citizen Four and Alex Winter's Deep Web, along with Gibney's own earlier documentary about Wikileaks, We Steal Secrets. If you're interested in those you'll probably enjoy Zero Days.