A Life of Answers 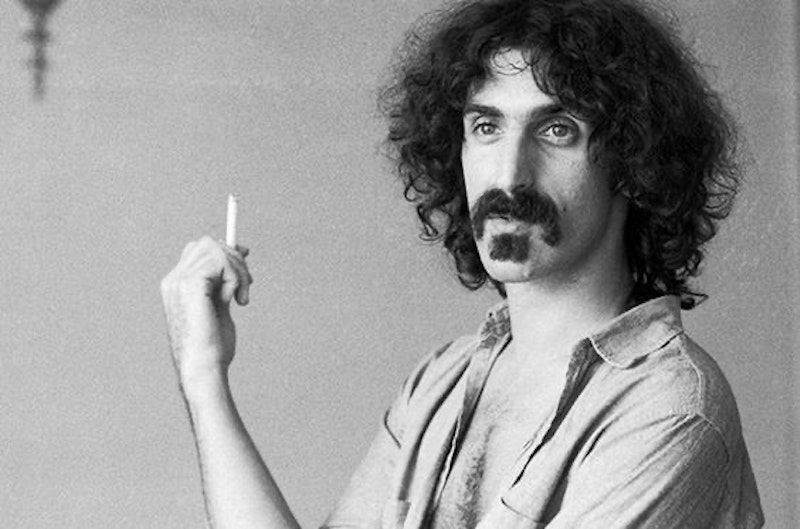 Need another Ghostbusters review? Didn’t think so. It was good. I dug it. Some good jokes right off the bat: “This is where the anti-Irish fence was installed,” “This is where P.T. Barnum came up with his ingenious idea of enslaving elephants,” “You’re acting like the mayor from Jaws!” But there are a couple documentaries showing at Baltimore’s Charles Theater now that are far more compelling than Paul Feig’s overly cautious paint-by-numbers reboot: Tickled and Eat That Question: Frank Zappa in His Own Words. The former, heavily hyped and enhanced by its ongoing legal struggles with the guy it tries to expose, is disturbing, but it’s a straightforward documentary with the filmmaker as its star, traveling across the world to track down and confront corrupt people, much in the same vein as Michael Moore’s Bowling for Columbine.

But we’ve seen that movie before. Eat That Question dispenses with the standard documentary format and uses no talking head interviews. That can be great when you get primary sources—Brett Morgen’s Kurt Cobain documentary Montage of Heck, for example, featured Cobain’s mother, wife, ex-girlfriend, uncle, and best friend. Unauthorized and poorly sourced docs made for TV or discredited by the families and subjects abound on YouTube and in the annals of iTunes. It’s just not as exciting when you can only get David Crosby’s second cousin, or Bowie’s maid. I’ve never gotten into Frank Zappa: his rock records, experimental work, and classical compositions, it all leaves me cold. Except for "Catholic Girls." Listening to Zappa talk reminds me of the old go-to line about Marilyn Manson—“I didn’t know he was so articulate! I don’t care for his music, but he’s intelligent!” “Catholic Girls” and “The Dope Show”—great, I’m there. But these are two guys I’d rather watch talk about culture, “obscenity,” politics and theocracy than carry on with Uncle Meat or the alien cup-suit of ambiguous gender.

Eat That Question is remarkably graceful and reflective, and as the subtitle suggests, direct from the source. But to have absolutely nothing other than interviews and concert footage, the lack of a narrator, and the silence that looms on top of this movie gives it a heavier vibe than something like Montage of Heck. Zappa was flamboyant and provocative, but he was just a man, and the laser-focus of the movie’s conceit make it intimate, like we’re looking into a private photo album. Of course all these interviews are public domain and mostly widely available, but to have them presented in this way is compelling, because it’s just the story of one man—not the whole story, not some sweeping puff piece or exposé—just a man, explaining himself and his philosophy in his own words. Musician biopics like Walk the Line and I Saw the Light create such a distance between the subject and that person’s reality, and second-hand documentaries don’t fare much better. Whether it’s excessive animation, titling, narration, or predictable structure, many documentaries are sunk by the emotional restrictions of the format. Eat That Question just moves along, from early adulthood to early death at 52, like life moving ceaselessly forward and without any commentary.