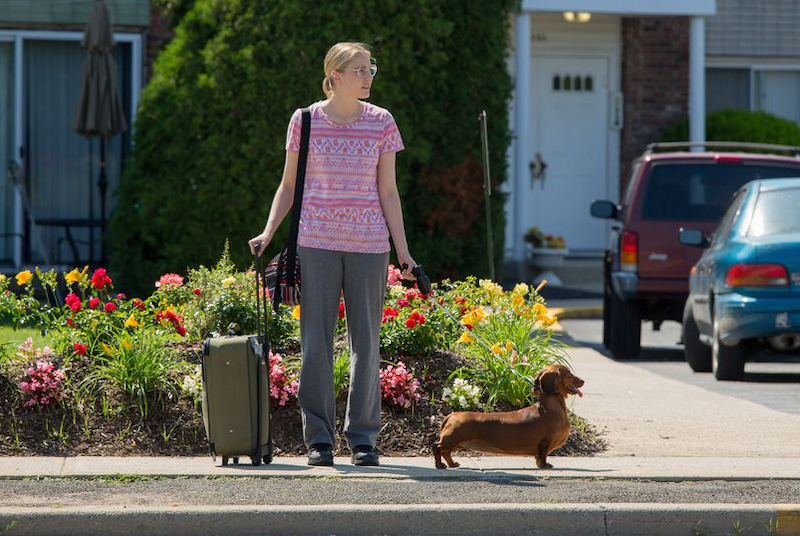 Who’s giving Todd Solondz money to make his movies? I’m thankful, but what loon banks on his fuck-style in this cultural climate? As much as Wes Anderson can be relied on to make more movies with well-dressed animals, glam rock, and all of his favorite objects, Solondz will always be there waiting to give us a dose of violent misanthropy, politically incorrect premises and toss-off gags, and short walks through the darkest corridors of the human condition: rape, pedophilia, mental and physical deformities, racism, violence against all that is sacred and off limits in even the most bold American art house movies. Four years after Dark Horse, a comparatively tame venture, he’s back with Wiener-Dog, a 90-minute postcard of a movie divided into four short stories, all connected by a hapless dachshund who moves from owner to owner, each person even bleaker than the next.

Solondz: “So much of what a pet is about for us is that it becomes a vessel for yearnings, dreams, illusions, hopes and so forth. It’s a projection of the ultimate innocence and purity. That’s why it’s hard to see a dog in its dogness. That’s why, when some harm comes to a dog, it’s much harder for an audience to deal with that, more so than dealing with harm that comes to a child or anything human.” And what a beautiful moment it is when the dog is run over on the highway at the very end, its gory mess flattened by half a dozen cars before the movie cuts to its coda, where she is reanimated as an embalmed animatronic art piece in a high end New York art show. I’m not actively seeking out dog gore footage, but it was refreshing to see a director hang on it for a couple minutes. Similarly, early in the film, there’s a slow motion tracking shot of the dog’s diarrhea set to Chopin. Solondz is speaking my language—but it’s easy to see why his films remain in limited release, unlikely to screen outside of New York or LA.

Another great moment: when a mother explains to her child why dogs must be neutered and spayed, and she makes up a story about an evil rabid dog she grew up around named “Mohammad” that raped all the neighborhood dogs, and even some squirrels. A married couple, both with Down Syndrome, take in Dawn Wiener from Welcome to the Dollhouse and her old bully, while Danny DeVito, as a frustrated film professor in New York, decides to fuck it all and strap a bomb to the dachshund and let it go in an NYU atrium, right next to an obnoxious pack of Millennials (one of the girls—white, and wearing an “I Can’t Breathe” shirt—wants to petition the school to fire DeVito’s character. “My dad’s on the board. He could make it happen.”) If Wiener-Dog had better distribution, it would undoubtedly inflame cultural critics for its virulent misanthropy and light-hearted racism and utter hopelessness. But no—just like DeVito’s character, Solondz is somewhere in Manhattan, maybe a little bit happier, planning his next manifesto of hatred and disgust.