The Last Studio Comedy is Let’s Be Cops

Released four days after Michael Brown was killed, this movie is more than a poorly-timed curio: comedies aren’t made like this anymore. 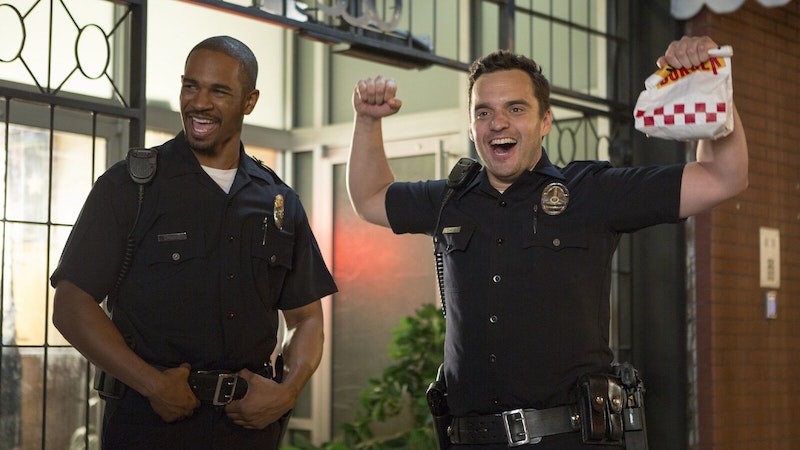 Every day it becomes clearer that 2019 was the “last year of movies” as we know them—writer Will Sloan tweeted that sometime last year, and Quentin Tarantino said as much on The Joe Rogan Experience late last month.

Good thing that last year was a stunner, a year like 2004, 1999, 1972, 1950, or 1939, as I’ve written many times. The one I harp on the most—besides The Image Book and Once Upon a Time in Hollywood—is Joker. Released less than six months before the pandemic began, its trailers and the media’s coverage led to local police stationed at theaters across America, everyone revved up to believe that if this film wasn’t sealed away and thrown into the ocean, blood would be spilling down aisles.

Todd Phillips’ film got a lot of coverage, unlike Luke Greenfield’s Let’s Be Cops, released in the summer of 2014. To be more specific, August 13, 2014—four days after the killing of Michael Brown in Ferguson, MO. This was the event that made #BlackLivesMatter a famous phrase around the world, and the first time that surplus military equipment like tanks, tactical gear, and sound canons—all ostensibly built and bought to be used in the Middle East—was used on American citizens at home. For the first few days of “unrest,” the networks were not covering Ferguson at all, and for the first time, live streamers proved their mettle and provided a horrible night-vision view into the future. Peaceful protestors were pushed, pulled, and beaten into submission by cops that looked like they were outfitted by Paul Verhoeven, not a local police department.

This was not the ideal time for a movie called Let’s Be Cops to come out.

But it made $138 million against a $17 million budget: a resounding success, even if it got rafts of pans and awful reviews. Current events instantly turned it into a trivia question, a curio, a darkly funny story of bad timing and circumstances like the attempted reunion of Katrina and the Waves (“Walking on Sunshine”) the very week that Hurricane Katrina made landfall.

I finally watched Let’s Be Cops last weekend and what struck me most was how out of time it feels: this is a studio comedy in the vein of Harold and Kumar Go to White Castle; Dude, Where’s My Car?; American Pie; and even some of the earlier Judd Apatow (and Apatow adjacent) movies like The 40-Year-Old Virgin and Superbad. Far from “copaganda” like Law & Order or Jack Ryan, this is two dudes acting like teenage boys in crazy circumstances beyond their control. They’ll zig, they’ll zag, at least one of them will fall in love (or get laid), and everyone will end up alive and basically happy at the end. No big deal, no lessons learned, we’re here to have fun.

This kind of movie isn’t made anymore—not by 20th Century (still Twentieth Century-Fox when they distributed Let’s Be Cops), nor by Amazon Studios or A24 (Blumhouse is the only reliable purveyor of glossy sleaze). In the film, Jake Johnson and Damon Wayans, Jr. play two “losers” typical of the genre: approaching 30, no serious girlfriends, no careers, embarrassing high school reunions. Every beat here is familiar, every device and set-up well-worn and free of complication—once again, no lessons learned.

There are jokes in here that would never be filmed, let alone used, in a comedy today: when Wayans’ romantic interest (Nina Dobrev) sees him making an “effeminate” gesture with his hands, Wayans must clarify that he is not, in fact, a homosexual. Johnson’s more awkward behavior wouldn’t be as pathetic today, and he wouldn’t be so desperate for pussy. I’m not pointing out “dated” jokes and situations to “get one over” on the film, I just want to reiterate this got in right under the wire. Filmed in the spring of 2013, when “Blurred Lines” was an unavoidable pop hit, Greenfield likely had no idea he was making the last true studio comedy, as we knew them from the mid-1960s until just under a decade ago.

There have been exceptions in recent years: Family, Flower, The Beach Bum, Bad Trip, Borat Subsequent Moviefilm, Sausage Party, and Ingrid Goes West all hit the spot, but in every instance, there’s a moral cleansing of the careless and invincible protagonist. Longer in some, shorter in others, this isn’t something foreign from the studio comedy as we knew it. Even Adam Sandler at his most puerile in the 1990s turned a corner by the end, particularly in his still overlooked and underrated Big Daddy. That film presaged plenty of the adulterated comedies of today, where everyone must start out good or learn their lesson by the end.

But Big Daddy was good!