The Brain Eaters (1958) was as close as Bruno Vesota ever got to recreating the magic of Dementia (1953). 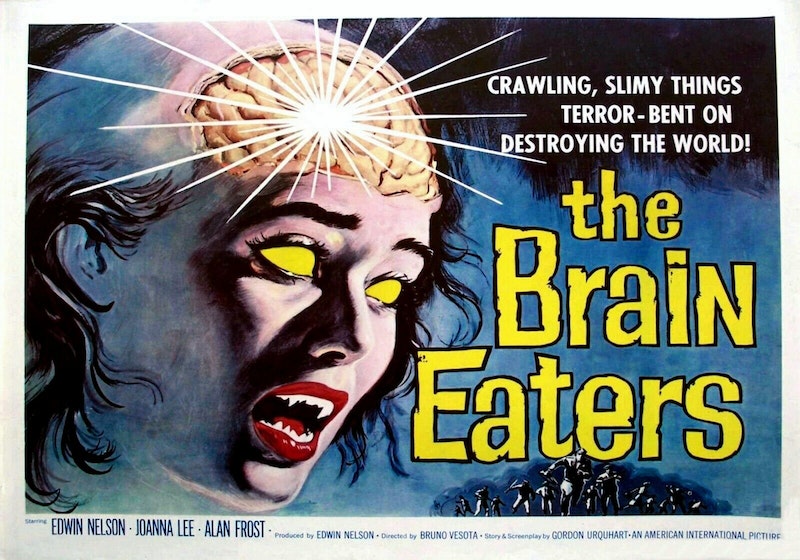 Twentieth-century America’s greatest work of avant-garde cinema was Dementia, the co-directorial debut of John Parker and Bruno Vesota. The 1953 film was a silent psychedelic nightmare that pushed the boundaries of narrative filmmaking beyond anything conventional in its time. It remains anomalous today. In 1957 it was re-released with a narration track recorded by future Tonight Show star Ed McMahon. This version appeared in theaters under the name Daughter of Horror. Hidden behind that cliched title, Dementia was then lost in the sprawl of drive-in/B-movie programmers where more adventurous audiences and distributors overlooked it. John Parker never made another film; soon after the re-release Vesota switched focus maintaining a successful career as a character actor that spanned three decades encompassing Hollywood productions, B-movies, indie films, and TV shows.

Other than Dementia ,Vesota directed only three other films—the brainless comedy disaster Invasion of the Star Creatures (1962), Female Jungle (a 1955 noir thriller famous for being Jayne Mansfield’s first star vehicle), and the 1958 sci-fi quickie The Brain Eaters. This surreal work was as close as Vesota ever got to recreating the magic of Dementia. It’s also one of the few early Cold War sci-fi pictures to establish a strong sense of moral ambiguity. Conflicts arise from the shared lack of empathy which humans and aliens have for each other. Uncertainty, invisibility, and irrational fears are just as dominant as any of the movie’s violent title monsters and the visceral chaos they create.

The premise of Brain Eaters was a common 1950s plot similar to The Beast With A Million Eyes, Invasion Of The Body Snatchers, and Invisible Invaders. Focusing on an alien enemy hidden in plain view, all of these films were haunted by shadows of The Red Scare. The monsters in Brain Eaters travel from a nameless outer space world and land on Earth where they set up shop in a small California town. Surprising goals inspire their visit and are explained towards the end of the film once a group of local scientists break into a secret chamber located inside of the creatures’ cone shaped spaceship. This gleaming prop looks more like a mid-century modern installation art piece than any cosmic vessel.

The brain eaters secretly embed themselves among Earth society. They attach themselves to the base of human skulls where they feed upon brain matter and manipulate their hosts in dangerous ways. Human reactions to this mayhem emerge in two forms: strategic self-defense and knee jerk/fight-or-flight aggression. The townsfolk make no concerted attempt to communicate with the aliens until the film is nearly over. By then any benefit of communication has been damaged beyond repair.

Leonard Nimoy makes an early appearance as an alien; his performance mixes the benevolence of a mystic prophet with the detachment of a logic-damaged proto-Spock. Like Daughter Of Horror, The Brain Eaters benefits from the authoritative tone of overdubbed off-screen narration. Some scenes are shot from intentionally crooked angles while others swim in layers of smoke and darkness. The aliens are sometimes carried around in incandescent orbs filled with water and steam. Their dazed human slaves skulk around under the cover of night illuminated only by the orbs’ eerie surging glow.

Even with a derivative plot, weird touches like this turn The Brain Eaters into something more than a horror film. Vesota’s strongest moments come when he focuses on the monsters. When they’re not submerged in watery light orbs, they look and move a bit like vintage, wind-up toy mice covered in Muppet fur and pint sized deely boppers. That these clunky contraptions seem scary is a testament to the director’s cinematic genius. Other than the obvious “enemies among us” theme, the diminutive height of the brain eaters forms a big part of the film’s political symbolism. These tiny creatures control and destroy full grown humans with ease. Only when the humans confront the brain eaters’ larger host bodies are they able to mount any counterattack.

Small conquerors wrangling oafish zombified subordinates. Humans enslaved by the limitations of their own imagination. Grandiose presumptions formulated from a culturally insensitive standpoint where the might of logic always makes right. These concepts drive The Brain Eaters and yet the film never presents a dominant protagonist or antagonist. The imperfection of humans and their Earth-centric philosophies are presented in detail, but they’re not solely responsible for igniting the film’s conflicts. These come to a head during the climax which occurs high in the air on a large piece of scaffolding. This prop and its stature symbolize the film’s zeitgeist. With Brain Eaters, Vesota held up a mirror to a society under construction and its worst-case scenario—a contentious world where unfamiliar technologies and primitive obsessions with security could be locked in a crippling stalemate.