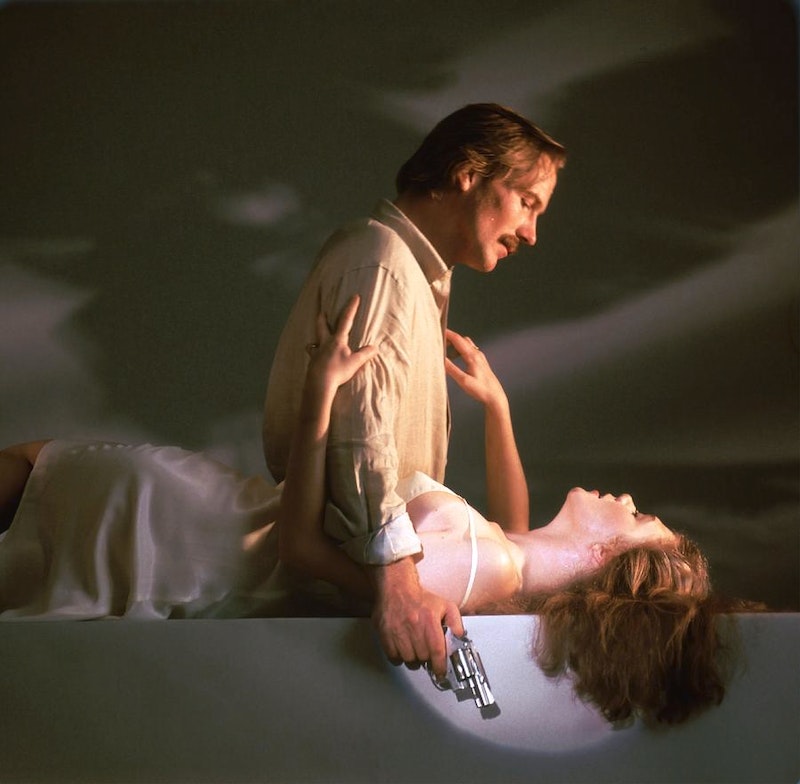 The heat’s on and it’s sizzling in Lawrence Kasdan’s neo-noir, Body Heat (1981). It stars William Hurt as Ned Racine, an inept attorney with a sketchy record and a taste for casual sexual encounters. Ned’s used to his heuristically-charged life until he (seemingly out of nowhere) encounters the beautiful, sexy, and seductive Matty Walker (Kathleen Turner).

Ned follows Matty onto the boardwalk, and strikes up a conversation. It’s clear she’s out of his league but that doesn’t seem to bother Ned. “I’m a married woman,” says Matty, as if to repel Ned but that only creates more intrigue for him. He asks her not to talk about the hot weather but this is South Florida and it’s unavoidable. The humidity is unbearable and it’s creating an atmosphere of slow descent into the unknown.

Matty’s house has chimes, which make sounds but the breeze is deceptive. Instead, it’s only hot air. She’d like to show Ned these chimes, and both know what this really means. But upon their first encounter, Matty suddenly disappears into the Florida mist. This only makes Ned even more curious, and he becomes obsessed with finding Matty. He finds her, but one suspects not by chance, in a local tavern. After some double-entendres banter, Ned follows Matty to her home. He sees the chimes finally but Matty asks him to leave. However, the unspoken challenge is there. The door is locked behind Ned but Matty’s gaze is piercing. Is Ned man enough to break through the door and take her?

Matty’s not like other women Ned has had sexual encounters with, which are mostly perfunctory. With Matty, he experiences an insatiable appetite of a free woman, who’s pretending to be imprisoned by a cruel and overbearing husband, Edmund Walker (Richard Crenna). It’s the power of the manipulative eros that Ned’s faced with, yet he’s completely unaware of it. Unlike Raymond Chandler’s Marlowe, whose own interior conflicts and subtle masculinity keep him away from femme fatales, Ned doesn’t engage in self-reflection. He lives by the pleasure principle.

Everything Matty does and says is charged by the power of suggestion, including the unspeakable—getting rid of her husband. Ned’s convinced she loves him and once Edmund is out of the way, they can continue their relationship. But what Ned doesn’t take into consideration is what exactly would that relationship consist of? After all, it’s based on lust and power, and only functions in its foundational sphere, the region of secrecy, adultery, and transgression.

Matty convinces Ned that her husband must be killed, and makes him think that it was his idea, thereby absolving herself of all responsibility. Through a series of events, such as a forged will that implies Ned’s involvement and culpability and an explosion of a boat house that suggests Matty’s death, Ned’s charged with the murder of Edmund Walker and sent to jail. Matty, it turns out, is actually Mary Ann Simpson, and as the film reaches its conclusion, she’s enjoying a drink in some remote and exotic location.

Body Heat functions on several levels. Naturally, it comes with its own notion that it’s a neo-noir, which can often result in an embarrassing cliche. But that’s not the case here. Even with the erotically suggestive dialogue (a hallmark of noir cinema), Kasdan (who also wrote the script) is self-aware. There’s a hint of irony in his treatment of the genre, yet careful decisions and homage to the noir tradition penetrate the film.

The heat becomes a metaphor for several events, and Kasdan’s photographic choices enhance the air of mystery Ned’s thrust into. The sultry mist and the soft tones represent separate and wholly different personalities of Ned and Matty. She’s always in charge and the primary creator of the fog that Ned can’t get out of. (We see very similar tropes and events in Paul Verhoeven’s Basic Instinct). This is a film caught in two spheres—it retains some of the soft tones of the 1970s, yet it’s coming alive in the present (but not yet fully realized) 1980s.

There are forces that are trying to wake up Ned from his metaphysical slumber, such as his friend, Peter Lowenstein (played excellently by Ted Danson, whose presentation has hints of his later role in Three Men and a Baby), but Ned doesn’t listen.

The interplay between the sexes doesn’t follow the usual path of male/female playfulness. What Ned doesn’t realize is that he’s dealing with evil (another aspect that makes him different from Chandler’s Marlowe or Gene Hackman’s Harry Moseby in 1975’s Night Moves), and in the heated mist of life, he can’t see the difference between good and evil. Even before he encountered Matty, Ned was existentially lazy, and as such, proved to be a perfect vehicle for Matty’s nefarious plans.