Are You Scared of Feet?

Quentin Tarantino’s movie theater efforts are mocked merely because the man is obnoxious. Who cares? 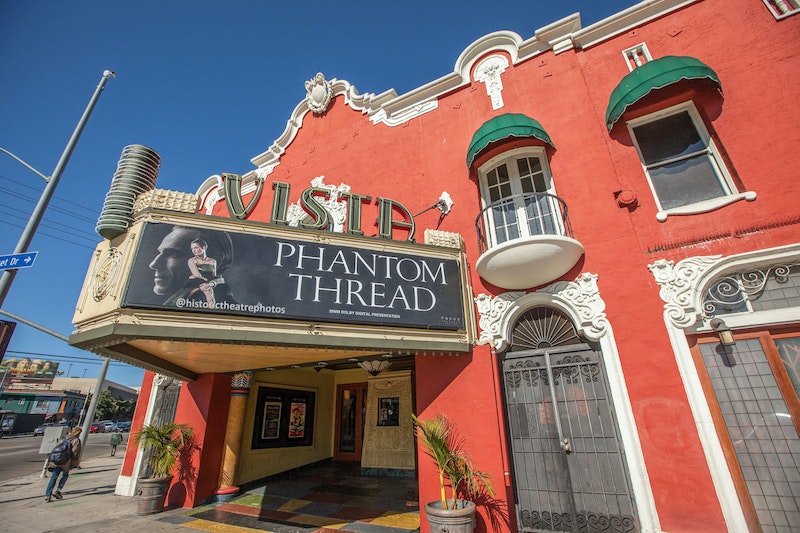 Why would anyone complain about Quentin Tarantino buying movie theaters in Los Angeles? After acquiring the New Beverly in 2013, he’s now bought the Vista. Lance Alspaugh, owner since 1997, told The New York Times: “Over the years, I’ve had other people that have been interested, they’ve wanted to buy it… There was a company that wanted to turn it into a brewery, believe it or not, they had offered a fairly large sum of money to buy it and I didn’t want to do that. So I think that with Quentin’s background, his own love of film, I just think it’s a good deal for both parties. I think everybody’s happy about it.”

You’d think so. But when I heard the news—via fifth-hand quote tweets—there was little good nature or mercy mild. “Will it be big enough to fit his ego?” one person tweeted, while others simply harped on the same tired foot fetish jokes typically deployed in the absence of any real ammunition against Tarantino. Others claimed that “film only” theaters like Tarantino’s are elitist and inherently racist because they favor films made by white people, and most of them white men.

Never mind that these efforts are intertwined, that archivists and filmmakers have the same duty to preserve celluloid prints and maintain the creation and security of contemporary DCP’s—no, never mind, because if David Lynch or Paul Thomas Anderson started buying movie theaters, no one would complain. They’d be drooling.

Regarding the Vista’s future, Tarantino said, “It won’t be a revival house. We’ll show new movies that come out where they give us a film print. The New Beverly has its own vibe. The Vista is like a crown jewel kind of thing. We’ll show older films, but it will be like you can hold a four-night engagement.” This is great. How can anyone complain about this? The Vista is a single screen theater in Los Angeles, just one among dozens of places to see movies in that city. Are people really still that sore over the Bruce Lee scene in Once Upon a Time in Hollywood?

The novelization just came out, and Tarantino is making the press rounds he never made for the movie in 2019 (for whatever reason, he stuck to uber-nerd film podcasts). He reiterated what an “asshole” Bruce Lee was after Joe Rogan probed—the man wants to know. You can see the sadness in his face when Tarantino starts ripping into Lee and his alleged lack of professionalism. I don’t doubt the stuntman sources and stories that Tarantino draws from throughout his book, which diverges quite a bit from the movie, mostly because they’re fun and the stars acknowledge at the beginning of the book probably would know (David Carradine, Robert Forster, Michael Parks, Robert Blake, Bruce Dern, “and especially,” Kurt Russell).

In an article for Forbes with a preposterous title (“Quentin Tarantino Should Have Kept Quiet About The Controversial Bruce Lee Scene In ‘Once Upon A Time In Hollywood’”), Dani Di Placido wrote that his “rebuttal seemed like a typical Tarantino attempt to be edgy,” whatever that means. How do you attempt to be edgy? What is edgy? Is it making certain people mad? If so, I think Tarantino “succeeded” in your eyes. But again, would Placido ever accuse Lynch—quoted at the end of the piece—of “attempting to be edgy”? Tarantino and Lynch are not exactly diametrically opposed as filmmakers: both deal with extreme violence, Americana, abused people, criminals, and idiosyncrasies that are either “in” or “out,” depending on what decade you’re in.

The press and some of the public resent Tarantino because he’s obnoxious, just like they do with Kanye West. For a guy who dropped out of eighth grade, whose former typist/assistant once called him “functionally illiterate,” and who still has only learned to type with one finger at a time, Tarantino’s success as an artist and a businessman is remarkable. He bragged in a 2003 Rolling Stone interview, about his home theater, “My imagination built this.” Wearing a brown velour tracksuit, asked the standard question about his legacy, he said, “In 20 years, I hope people will think of me as one of the greatest directors who ever lived.”

Arrogance like that—and West’s—is out. Not for long, depending on how successful Donald Trump’s 2024 efforts will or won’t be. In any case, a man with money that wants to keep movie theaters open out of his own pocket, showing prints he owns, open to anyone who wants to come—again, what’s not to love? It’s certainly better than David Lynch’s “Masterclass” series, available online for $15 a month. Who knows what you can learn from a YouTube video?

I understand reticence and even revulsion at Tarantino’s colossal ego and its manifestations, but just take what he’s doing. This is a familiar story unfinished: Tarantino will get awful personal press until the day he dies, when he will be mourned as a modern master, perhaps one of the only ones left standing (I certainly hope not). And the work will be taken as it should be: (mostly) without the man. But why not relish the reality of one more movie by this guy before he fully becomes a “man of letters”? Is the Bruce Lee scene really that bad? Are you scared of feet?