Amazon series and movies rarely break through, and The Tomorrow War will come and go without notice. C 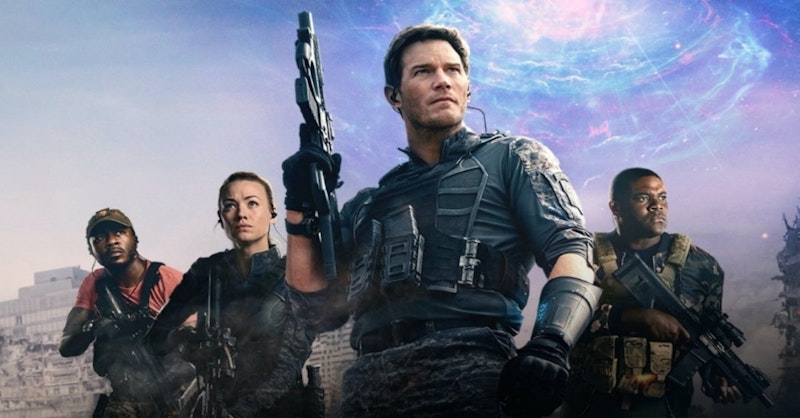 The Tomorrow War is an unimaginative sci-fi action epic that squanders a promising premise, thanks to subpar action, and a star that it has no idea what to do with. It feels like a blockbuster, but is instead confined to the hinterlands of Amazon Prime Video.

The film, directed by Chris McKay, lays out its premise in the opening scene: During the World Cup Final in 2022, soldiers arrive from 30 years in the future, to let humanity know that in 2051, they're at war with aliens called the Whitespikes. This future war isn't going so well, so they ask to send the world's armies into the future to fight the aliens. Eventually, conscription is necessary, so hero Dan (Chris Pratt), a retired Army Ranger who now teaches science, is sent into the mid-21st century to fight the aliens.

The bulk of the film consists of Pratt, along with comic-relief sidekick Sam Richardson (who's in about a half-dozen recent projects that are better than this), going toe-to-toe with the future creatures, with occasional creative time travel. Also on board are J.K. Simmons as Pratt's estranged father, Betty Gilpin as his wife, and Yvonne Strahovski as his grown daughter in the future. The film attempts poignancy with a father/daughter story in which the sci-fi implications of the plot make them about the same age. But that was better done by Matthew McConaughey and Jessica Chastain in Christopher Nolan's Interstellar, a film that for all its faults took the paradoxical elements of its sci-fi plot seriously.

Pratt, the star and executive producer, is a capable actor provided he's in projects, regardless of the genre, that allow him to be affable and funny. This was the case in his star-making Guardians of the Galaxy films, and slightly less so in Jurassic World. Here, though, he’s mostly in lunkheaded action warrior mode, showing little personality.

As for the aliens, they’re lazily conceived giant bugs. This further makes the movie resemble, as more than one critic has pointed out, Verhoeven's Starship Troopers, minus the satire and social commentary. Not that it's worth the efforts of the Twitter wags who’re constantly trying to suss out Pratt's unstated but presumably conservative political views, but The Tomorrow War does have a reactionary streak. There are dismissive references to anti-war protesters putting humanity at risk by resisting the draft, and while the possible death of humanity in the not-so-distant future seems like a metaphor for climate change, the film doesn't touch that one.

The Tomorrow War was originally set for a theatrical release last year from Paramount, but it was sold to Amazon Prime, where it debuted just before the holiday weekend. A lot of movies that got shifted to streaming during the pandemic felt at home on the small screen, but this one doesn't.

Aside from a once-a-year phenomenon like the Borat sequel, Amazon series and movies never seem to break through. See The Underground Railroad, the beautifully mounted 10-part series from filmmaker Barry Jenkins that came and went this spring with barely a cultural blip. The Tomorrow War, its status as a big-budget action blockbuster notwithstanding, seems unlikely to break the streak. Nor does it deserve to.