The Immortal Story (1968) and its place in the career of the great magician who may have exaggerated facts, but who always spoke the Truth. 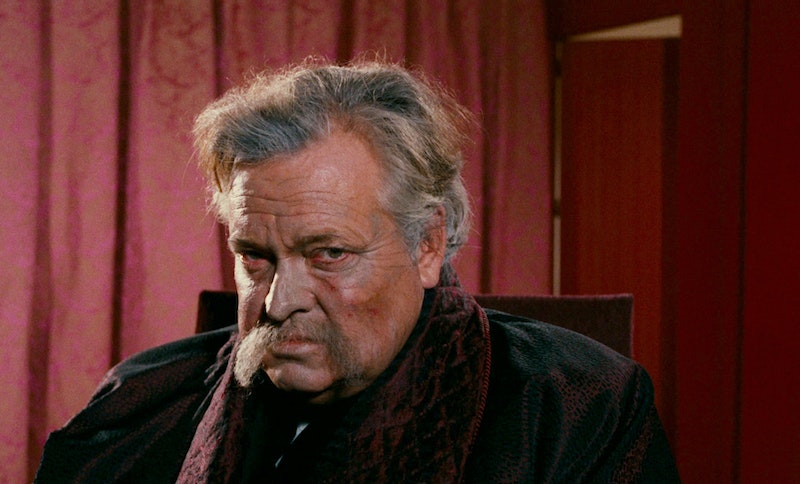 One of Orson Welles’ preoccupations was the art of storytelling. He was a master storyteller, especially when it came to his own life. We’re never certain and satisfied with the alleged truth about one or all events of his life, and despite the myriad of books written on Welles, he still remains an enigma.

It’s hardly surprising then that the literary oeuvre of a Danish writer, Isak Dinesen (1885-1962, pen name of Karen Blixen) had an intoxicating effect on Welles, much like Shakespeare’s work. Dinesen knew how to weave stories in such a way that both the spirit and body exuded from her carefully constructed pages. There’s an ethereal and hypnotic quality to her work, as well as the continuous probing of human endeavors in the ways of love, faith, sacred, and profane.

Welles’ first color film and last fictional feature, The Immortal Story (1968), is an adaptation of Dinesen’s eponymous story, a tale within a tale, and an approach that Welles takes and strictly adheres to. Welles greatly admired Dinesen’s work. Apart from a few inconsequential changes, he sticks to Dinesen’s vision. The film runs only 58 minutes, and it was made for French television. Strangely enough but keeping with Welles’ unfortunate fate, the producers took on the project because of Jeanne Moreau. She’d become a great star and a symbol of eroticism, which they wanted to exploit. The fact that Welles was the director of the film was a pleasant bonus.

The story itself involves four characters: Mr. Clay (Welles), a bitter old man, who doesn’t have any friends and sees no purpose or reason to have human relationships; Mr. Clay’s personal assistant, Elishama Levinsky (Roger Coggio), who sees his relationship to Clay in transactional sense and carries out any task that Mr. Clay sets before him; Virginie (Moreau), a courtesan with sorrowful connections to the cold-hearted Clay; and Paul (Norman Eshley), a lonely sailor who accepts Mr. Clay’s strange proposition.

The proposition involves a re-enacting of an often-told sailor’s tale. Whether out of boredom, need for control, or perhaps both, Clay wants to possess it and thinks that unless and until the story is actually realized, it can’t be true. Every sailor has told it as if it’s his own: a wealthy businessman offers money to a random sailor to sleep with a woman in his house. It’s an indecent proposal, and that is why it’s “just a tale.” It may not have happened but it still contains within it a deeper truth.

Clay is dissatisfied with that. He doesn’t have any regard for others’ dignity or free will, and since he doesn’t even know how to have a meaningful relationship (he has cut himself off from an encounter), he doesn’t feel qualms about pulling the strings of other human beings. Just like in the story, Clay finds a sailor on a street, disheveled and worn out from his endless journeys on the sea. Paul reluctantly accepts his proposal. It is Levinsky, however, who must find the woman, which happens to be Virginie, the daughter of a man, who was driven to suicide by Clay, and whose house Clay currently occupies. Much like Paul, Virginie is scandalized by the offer, and doesn’t want Clay to have power over her. But she eventually accepts.

After the sex is over, and has satisfied Clay’s desire for possession, Levinsky tells Paul that now he’s the only one who can tell the story because it actually happened. But Paul reveals that he will never speak of this to anyone. The experience is too precious, too sacred, and he will not let it be cheapened with storytelling, which he finds vulgar. Both he and Virginie have accepted the money but their experience will remain a secret. In this case, Clay doesn’t possess the most precious and interior part of their being.

Welles’ photographic choices are much different from his other films. He shot the film in color with soft focus, while the color comes alive on the screen. The subtle sounds of Erik Satie’s elusive and mysterious music permeate the film, revealing the layers of human personality (much like Dinesen’s storytelling intention was as well). Despite the fact that the environment is filled with other people, these four characters function within their own spheres. It isn’t only Clay who’s separated from humanity, but in their own way, Levinsky, Virginie, and Paul aren’t experiencing the depth of an encounter.

Clay’s action doesn’t change him in any way. His hatred and misery remain precisely because he’s incapable of love, and in the end, can’t possess the erotic encounter between Virginie and Paul. Yet, his need to possess the story as well as others’ lovemaking, is a catalyst for interior change and transition for the other three. Levinsky knows that now he has to look for another job; Paul has turned into a man with a resolve; and Virginie experiences pleasure and warmth of human touch and care, and knows that she can have closure, however incomplete it may be. These three also must face their own selves—in the film, there are several scenes with mirrors, a metaphor Welles employed in many of his works, most notably in Citizen Kane (1941).

Welles rarely dealt with eroticism in his work, and found any mention of sex in films to be crude and almost primitive. This isn’t to say that Welles was in any way a prude. On the contrary, he was a man who had lust for life. But in terms of filmmaking, The Immortal Story represents a departure from that mindset, and reveals a director not only capable of subtly filming the erotic, but also succeeding. (Much of this departure is owed to his partner, Oja Kodar, who was also his collaborator and a protégé. She brought eroticism to Welles’ work, which we see later in The Other Side of the Wind).

What makes The Immortal Story unique is that Welles retains a Shakespearean lens that’s generally present in all of his productions (whether they’re adaptations of Shakespeare’s plays or not), while he embraces the journey into the erotic regions of being. Welles is one of the greatest humanist filmmakers (in my opinion, John Cassavetes and Andrei Tarkovsky are the other two), and he’s naturally drawn to the stories that deal with perennial modes of being. Welles loves the question what does it mean to be human, and this is why his films transcend time, and why they continue to reach into our own souls. The Immortal Story may be a “different Welles,” but he remains true to his essential vision—is the storytelling true? What does it mean to tell a story? Why do we tell stories in the first place? What are the stories and lies we tell ourselves to keep living? Most importantly, is a story a lie or a trick?

Welles deals with the last question in more detail in his masterpiece, F for Fake (1975), in which he muses on (presumably!) Picasso’s words: “Art is a lie, a lie that makes us realize the truth.” Welles may have concealed much of his interior self throughout his life, for reasons only known to him. That will always remain a secret, something we’ll be unable to touch. To fully grasp and possess an artist is impossible. But Welles’ work remains, and it’s in his films that we get closer to “Orson Welles,” that great magician who may have exaggerated the facts and even turned them into lies, but who always spoke the Truth.